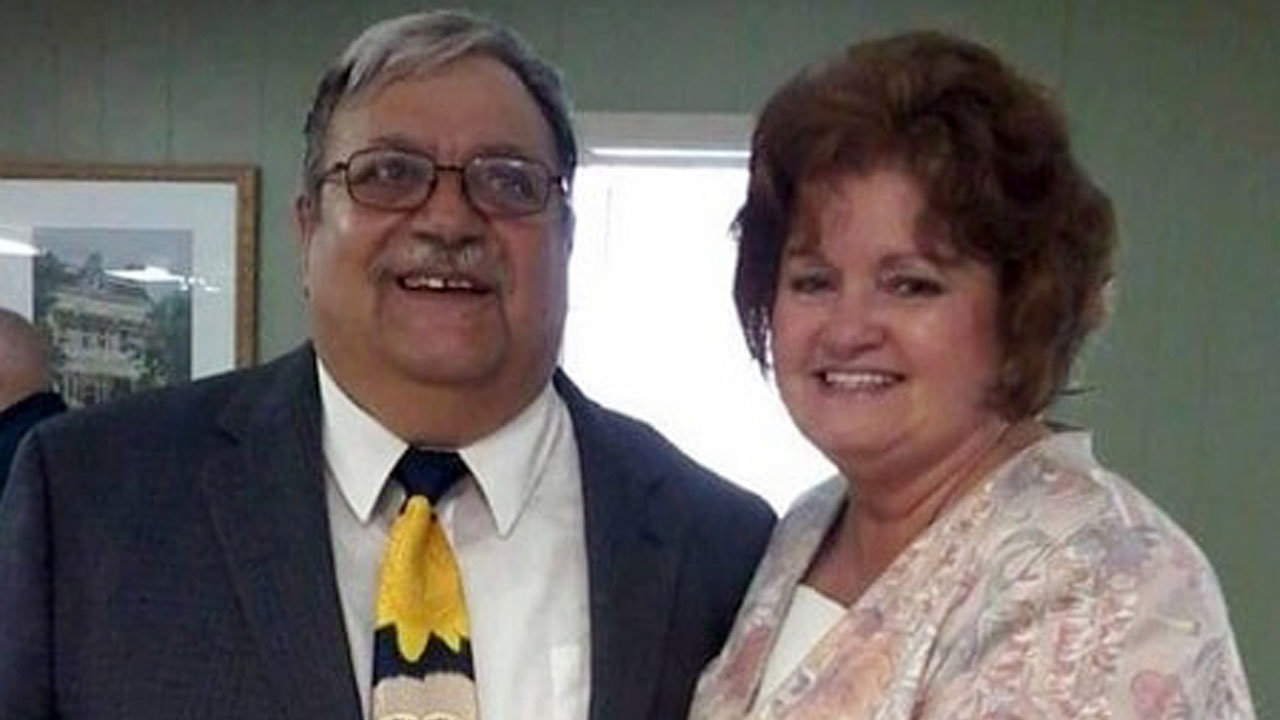 Pastor James Cart, left, was killed when a tree fell on his roof during Hurricane Laura. His wife, Dianne, was also in the home at the time. BP/Special
Posted Tuesday, September 1, 2020 7:41 am
Baptist Press

Pastor James Cart, left, was killed when a tree fell on his roof during Hurricane Laura. His wife, Dianne, was also in the home at the time. BP/Special

LAKE CHARLES, La. (BP) — A Southern Baptist pastor is among 18 deaths related to Hurricane Laura, dozens of churches are damaged, and parts of Cameron Parish remain flooded five days after the storm, according to news reports and interviews.

James Vernon Cart Jr., who pastored First Baptist Church of Iota, La., in Acadia Parish, died early Aug. 27 when a tree fell on his home around 2 a.m. as he slept. Bert Langley, director of missions with the Acadia Baptist Association, said the 68-year-old had gone to bed ahead of his wife, who remained in the living room with a grandchild who was visiting.

Bruce Baker, director of missions with the Carey Baptist Association in Lake Charles, said Hurricane Laura “severely damaged” about 10 churches, 15 to 20 have “moderate” damage, and a few others have minor damage, including churches in Lake Charles, Sulfur, Benton, Cameron, Hackberry, Moss Bluff, and West Lake.

First Baptist Church in Iota in May 2015. GOOGLE MAPS

“Cameron is still under three feet of water,” Baker said. “That will take a long time for that to recede.”

The floodwater, which is dangerously interspersed with downed power lines, is making damage assessments difficult there, First Baptist Church of Cameron Pastor Charles Hugonin said Monday. He said a deacon was headed to Cameron Monday morning to try to get a closer look at the church, which is located just a mile from the Gulf of Mexico.

“As far as we know right now, the front doors are blown off and it’s flooded inside. Our Sunday School wing collapsed,” Hugonin said. “There’s power lines down. It’s still flooded. It’s dangerous as far as snakes and stuff.”

Hugonin hasn’t been able to determine whether the church will remain. When Hurricane Rita destroyed its sanctuary in 2005, the church chose not to rebuild the structure, but renovated its gym to include worship and education areas.

“Right now there’s just a lot of uncertainty,” he said. “My members are without homes right now. Once we find out what the damages are, I have to see if my members are staying there, if they’re planning on rebuilding in Cameron or not.”

Many are suffering. Widespread power outages and the lack of clean water have displaced thousands in Laura’s strike zone, even those with no damage to their homes, Baker said.

“There are thousands of families, they can’t stay in their homes and they can’t afford a hotel,” Baker said. “No shelters were set up because of the COVID thing. So we’ve got a lot of families that are really, really in dire circumstances. It’s a challenge now to figure out how to help them.”

Baker anticipates a long recovery, but said the area is not ready to receive volunteer disaster relief crews from other states because of the lack of shelter, food, and water.

“Our DR structure can manage Southern Baptist DR. They’re just excellent at that,” he said. “… Southern Baptists across the country have already been pouring out a lot of love and we’re incredibly grateful for that. It’s one of the best things we do as a denomination. We send missionaries around the world and we send people to help when there’s a disaster. … Proud to be Southern Baptists today.”

Nearly 360,000 customers remained without power in Louisiana Sunday, and it could take a month or more for all power to be restored due to catastrophic damage to the power grid. In the days after the storm, at least eight deaths were reported as a result of carbon monoxide poisoning from generators inside homes, according to news reports.

Baker appreciates that Laura came ashore during low tide, which prevented the unsurvivable storm surge the National Hurricane Center had predicted. Instead of 20 feet, the storm surge was likely about 13 feet, Baker said.

About 150 people chose not to adhere to mandatory evacuation orders in Cameron Parish, according to news report a day ahead of the storm.