Do Christians and Muslims Worship the Same God? 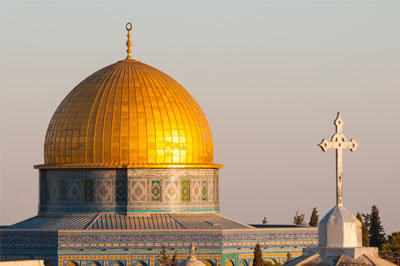 A Christian nominee for a government position who answered “No” to the above question suddenly found himself being not only cross-examined, but castigated by Senator and Former Presidential Candidate Bernie Sanders. Russell Vought, an alumni of Wheaton College, was on the hot seat because he agreed with his alma mater’s decision to fire Professor Larycia Hawkins.

Hawkins had publicly expressed her belief that Christians and Muslims worship the same God. Senator Bernie Sanders was infuriated by Russell Vought’s belief that Muslims who reject Jesus as the Son of God do not know God and the salvation He offers through Christ. He called this Christian belief “Islamophobic” and “with his voice rising, challenged Vought’s fitness for office.”

David French of National Review points out how Bernie Sanders’ inquisitorial questioning of Vought’s religion was in direct conflict with Article VI of the U.S. Constitution, which clearly states that “no religious test shall ever be required as a qualification for any office or public trust under the United States.” Article VI was designed to protect all people from religious ignorance and intolerance, which was on display the day Bernie Sanders lashed out at a Christian for simply expressing basic Christian beliefs.

Inquisitor Sanders does not seem to understand both Christianity and Islam, and the dramatic differences between them. French added a foreboding observation when he wrote: “Bernie Sanders shows how religious ignorance breeds progressive intolerance.”

We as Christians need to be prepared to deal with such intolerance. That means tackling the following two questions: Do Christians and Muslims worship the same God? What would Jesus say to Bernie Sanders – and us?

To our first question – Do Christians and Muslims Worship the Same God? – Professor Hawkins answers “yes.” So does Miroslav Volf, a professor at Yale University who spoke at Wheaton College in 2011. Although Dr. Volf acknowledges that the God understood by Christians is “similar but not identical” to the God understood by Muslims, he still argues there is “sufficiently similarity between Muslim and Christian conceptions of God” to say we “worship the same God.”

Although I understand that both Hawkins and Volf are striving to build bridges rather than walls between Christians and Muslims, I agree with Scott McKnight of Northern Baptist Seminary. He explains that saying Christians and Jews worship the same God “muddies the waters” when it comes to having a clear picture of God.

We as Christians can agree with Muslims and Jews on the belief in one God, Creator, and Sustainer of this universe Who revealed Himself to Abraham and Moses. What separates us from both Muslims and Jews is our belief that God came in the Person of Jesus Christ, Who reveals Himself as the most loving and forgiving Being the world has ever known or imagined – One Who came to live among us, suffer with us, die for us, and live in us.

Such incarnate love is completely foreign and contrary to what Muslims or Jews believe about Allah, or God. Miriam Adeney, a professor at Seattle Pacific University who has reservations about Wheaton College’s position, admits that when it comes to the Christian concept of grace “Muslim and Christian understandings of God are truly very different.

While Muslims, as one Christian missionary points out, believe that Allah is the same as Yahweh in the Old Testament, their Scripture “the Qu’ran defines a different God in nature and character.” Muslims do not believe Christians and Jews know or accept this God. The Qu’ran declares how both Christians and Jews may be “People of the Book” (Bible) but they are still Infidels.

According to the Qu’ran and 1,400 years of history, we are subject to being beheaded or enslaved in a Jihad, and if living in an Islamic state relegated to second class citizenship (Qu’ran Surah 9:30, 47:4). Perhaps the most glaring difference between the two religions’ concept of God is how in an Islamic Jihad Allah not only allows, but encourages, Muslim fighters to reap the spoils of victory, which can include rape, plunder, and the taking of slaves.

We Christians believe God the Father came to us in the Person of Jesus Christ His Son and now dwells within us through the presence of His Holy Spirit. This Trinity is something that boggles the minds of both Jews, Muslims, and many others. As Christians, we believe God doesn’t want merely to bless us but for us to be a blessing unto others by reaching out in love and understanding to all people, including monotheistic Muslims and Jews.

Sarita Gallagher of George Fox University refers to a couple of questions we must ask before approaching Muslims: “Did God speak to Muhammad ibn ‘Abdullah through the angel Gabriel in the Cave of Hira in 610 A.D.? If so, does the Qu’ran contain new revelations of God?”

We Christians are not Muslims because we answer “No” to both questions. We do not believe God gave Muhammad new revelations that conflict with what we read in the Bible. Since they do not have the same understanding of God as revealed in and by Jesus Christ we want to share our Savior and Lord with them without coercion and with love, kindness and grace.

Next time: What would Jesus say to Bernie Sanders, and us?