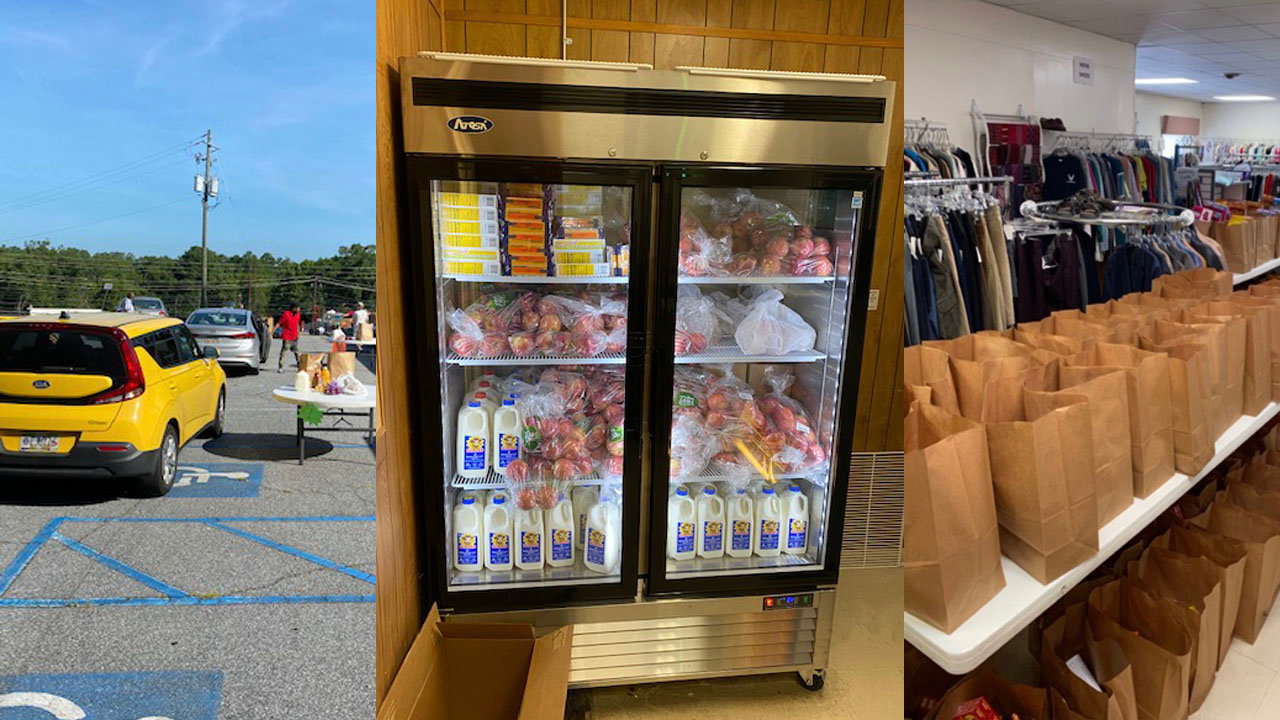 Cars line up to receive food at the Mission Columbus center in Columbus. CBA/Special
Posted Friday, July 31, 2020 10:10 am
Scott Barkley

Since mid-March, the amount of food given away by the Columbus Baptist Association has equaled 90 percent of that given through all of 2019. CBA/Special

COLUMBUS — Jimmy Blanton has seen the impact of the Columbus Baptist Association's food ministry, but never to the extent seen in this year.

The CBA, like many organizations, shut down its ministry center building in mid-March due to COVID-19. The ministry itself, though, has continued.

Those numbers during that span, he added, reflect 90 percent of the totals for 2019.

A "one day giveaway" in April brought the biggest crowd. "We had close to 700 vehicles passing through our parking lot," said Blanton. "In total, 9,110 pounds of food, including fresh produce, were given away."

The food ministries are indicative of Project: Well Fed, a food ministry emphasis through Mission Georgia of the Georgia Baptist Mission Board. Earlier stories can be found here and here.

Carla Adams, a member of First Baptist Church in Fort Valley, was overwhelmed by the response to her church's food ministry.

"I've served in food ministries before at our last home before moving to Fort Valley. As a nurse, I believe in holistic care of clients and right now, it is impossible to look at the health of children at risk without trying to address their nutritional and food security needs.

"This summer, I found an avenue of funding a program. Within one week, we at the church had made contacts, been approved, and recruited and trained 28 volunteers," she testified.

"In that short period of time with little advance notice to the community, we distributed over 6,800 meals. The experience has really opened my eyes to how the need has grown exponentially in our community."

The more you give, the more He gives

Blanton identified a biblical principal in the response.

"God has richly blessed our efforts as he has done for the last 15 years in meeting our needs as we have worked with others," he said. "It seems the more we give away, the more God gives."

Those blessings have come in different forms. One day Blanton received a call from a woman asking if they needed anything. His response was that the association would always accept cash.

Blanton told her half would go into helping families through Mission Columbus and the other half toward helping churches impacted heavily by COVID-19.

"Through that gift we were able to not only give away food but partner with churches in upgrading their live streaming of worship services. We also assisted in supporting the families of our ministers."

Later, another group donated $3,500 toward the food ministry. "I just had a call a week or so ago from a man who said he'd like to give $10,000 to a food ministry in Columbus and could we use the money. I told him, 'Of course," Blanton recalled.

The donations are great, but Blanton credited volunteers with making it possible.

"David Lix has done a tremendous job with our volunteers to see that families are given not only food but love and compassion to go with a Christian witness."

It's a joy to see earthly needs met, both said, but there's a deeper hunger even more important to fulfill.

"Our prayer each day before serving was to be the hands and feet of Jesus, for every word and action to plant seeds of salvation," Adams said.

"The one 'negative' in our new normal is that we're not having guests come into the building to select their food, clothing, and household goods," Blanton pointed out. "Therefore, we don't have an opportunity to see them face-to-face and share the gospel.

"But a gospel presentation is in each bag of groceries. Last year we had around 90 professions of faith through the food and clothing ministries."

Click here for more information on Mission Columbus. To find out how you can get connected to a food ministry, visit the Mission Georgia website.