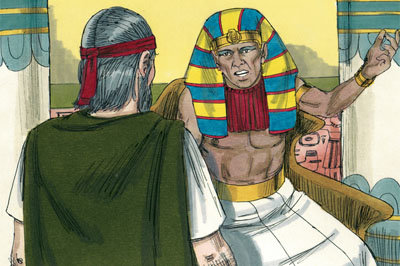 Recently I was asked this question by a faithful Baptist deacon and friend, requiring me to open my Bible to Exodus 4:21 where we read:  “The Lord instructed Moses, ‘When you go back to Egypt, make sure you do all the wonders before Pharaoh that I have put within your power. But I will harden his heart so that he won’t let the people go.” And in Exodus 7:3 the Lord reiterated to Moses: “… I will harden Pharaoh’s heart and multiply My signs and wonders in the land of Egypt.”

That seems to settle it, right?  If God hardened Pharaoh’s heart and thus stopped him from freeing the Israelites, why did He punish Pharaoh for what He had done? In the Pentateuch and Haftorahs, edited by Dr. J.H. Hertz, we read: “For God to make it impossible for a man to obey Him, and then punish him for his disobedience, would be both unjust and contrary to the fundamental Jewish belief in Freedom of the Will” (p. 220).

There is much more to the “hardening of Pharaoh’s heart” than first appears, reminding us that God wants us to dig deeper and think harder, and above all seek His guidance.

After acknowledging how God “twice predicts he will harden Pharaoh’s heart” Walker C. Kaiser, Jr. reminds us to keep in mind that if these two occurrences appear to cast the die against Pharaoh, it must be remembered that all God’s prophecies to his prophets have a suppressed ‘unless you repent’ attached to them. Few prophecies are unconditional … In Pharaoh’s case, Pharaoh initiated the whole process by hardening his own heart ten times during the first five plagues (Ex. 7:13,14, 22; 8:15, 19, 32; 9:7, 34, 35 and 13:15). It was always and only Pharaoh who hardened his heart during these plagues (Hard Saying of the Old Testament, p. 67).

Let’s slip down to verse 13 where we read how “Pharaoh’s heart hardened, and he did not listen to them (Moses and Aaron), as the Lord had said.” The fact still remains that God did predict He would harden Pharaoh’s heart, and “nine times the hardening of Pharaoh’s heart is ascribed to God. There thus seems to be two sides to this hardening” (Pentateuch and Haftorahs, p. 220).

How do we reconcile the two? May I share with you two illustrations, one an ancient Jewish midrash I first heard while a graduate student and the second an ancient Christian interpretation I later read in my studies.

A Jewish Midrash, or “interpretation/illustration,” asks us to picture two farmers. The first farmer cultivates his land with great care. The rains come. The sun shines. The crops grow. The second farmer refuses to work his land. The rains come and the ground turns to mud. Then the sun shines and the ground becomes as hard as clay. In a very real sense God hardened the second farmer’s land by sending the rain and then making the sun shine; but, he the farmer also ruined his land by not working the land.

A fifth century Christian commentator named Theodoret offered this wisdom: “The sun by the force of its heat moistens the wax and dries the clay, softening the one and hardening the other.”

The widely accepted Jewish and Christian view is that when a person continually rejects God their heart becomes harder and harder, even when God continues to reach out to them in love. As one scholar observes:

When the Divine command came to Pharaoh, “Set the slaves free,” and his reply was, “I will not,” each repetition of Pharaoh’s persistent obstinacy made it less likely that he would eventually listen to the word of God. For such is the law of conscience: every time the voice of conscience is disobeyed, it becomes duller and feebler, and the heart grows harder.

Man cannot remain “neutral” in the presence of Duty or of any direct command of God. He either obeys the Divine command, and it becomes unto him a blessing; or he defies God, and such command then becomes unto him a curse. “It is part of the Divinely ordered scheme of things that if a man deliberately chooses evil, it proceeds to enslave him; it binds and stupefies him, making for him repentance while near impossible (Reim, Pentateuch and Haftorahs, p. 220).

In the final analysis, the answer to our question is that Pharaoh hardened his own heart as have multitudes of people who have turned a deaf ear to God’s pleas. Tragically, so many people have, like Pharaoh, not only turned a deaf eat to God, but closed their minds and hardened their hearts. Although God knew it was Pharaoh’s nature to say no to Moses, it was and is His nature to continue “pleading and persuading” even if He ends up hardening the Pharaoh’s of the world!