I have been privileged to know some great men of God who have gone on to glory. I regret that many of our younger pastors and believers did not have a chance to know them or hear them preach. We must never forget the heroes of our faith.

So far, in this series we have considered great men like W.A. Criswell, R.G. Lee, and Adrian Rogers. In this biographical profile we shall look at Homer G. Lindsay, Jr, who served as pastor of First Baptist Church of Jacksonville with his father and then with Jerry Vines. This biographical sketch includes an interview with Dr. Vines about the man with whom he served as co-pastor in Jacksonville for almost 18 years. 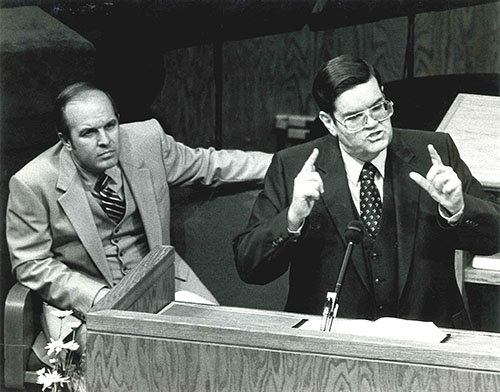 Jerry Vines is engrossed in the message of Homer Lindsay, Jr. his friend and co-pastor at First Baptist Jacksonville, FL. FBCJ/Special

Homer G. Lindsay, Jr. was born in Nashville on July 19, 1927 to Ruth and Homer G. Lindsay, Sr. When he was 13 years old his family moved to Jacksonville, FL, where his father became pastor of the First Baptist Church. After graduating from high school, Homer, Jr. graduated from Stetson University and Southwestern Baptist Theological Seminary.

In May 1952 Lindsay headed south to attend the Southern Baptist Convention in Miami where his father played the part of a matchmaker and introduced him to Shirley Tillman, a student singing in the Stetson Glee Club.

Lindsay fell in love fast, proposed to Shirley, and by September they were married. Lindsay began to look for a place where he could serve the Lord; and he preached in a church in Brunswick, GA that had a Sunday attendance of 300 people. The pastor search committee was impressed with Lindsay and asked him to let them consider him as a candidate for pastor.

He declined and said, “I don’t feel adequate.” The thought of serving a church that large petrified him.

Lessons from his father

Shortly thereafter, however, Lindsay accepted the pastorate of a 42-member mission in Miami. The mission became Northwest Baptist Church and grew from less then three dozen members to 3,280 members in the 16 years Lindsay served as pastor. During those years Lindsay led his church to become one of the great evangelistic churches in the Florida Baptist and Southern Baptist Conventions.

Much of what Homer G. Lindsay Jr. learned, he learned from his father. Homer G. Lindsay, Sr. became pastor of First Baptist Church in Jacksonville, FL in 1940 as the nation was coming out of the depression and was in serious financial trouble. Morale was low and contributions were dwindling. The church had a debt of $125,000, which was exceedingly burdensome at the time. The church had just lost a seven story educational building and there were no facilities for growth.

However, under the leadership of the energetic, 37-year-old pastor, a new era began. The church experienced tremendous spiritual, physical, and numerical growth. By 1943, the church was free from financial bondage and in 1948 the first new educational building was constructed debt-free.

In 1969 Homer, Jr. became the co-pastor with his father at First Baptist Jacksonville. From 1969-1988 the church’s Sunday School enrollment increased from 2,385 to over 14,172. Nine buildings were either purchased or constructed, including the 3,500-seat Lindsay Memorial Auditorium (1976) and the Preschool Building (1986).

The Florida Times Union referred to Lindsay as “a shy man, a bashful man, someone ill at ease with strangers – a man with a broad, heavy-set face with big glasses that accentuate his eyes, giving him a slightly owlish look. Yet, those who know him best see the power of God at work.”

"Integrity was his character"

The Times Union reported in a July 1999 article, “Lindsay, a lifelong teetotaler, won’t even eat at an establishment that serves alcohol. When the Lindsays do go out to dinner, they eat at such restaurants as The Golden Corral or Cracker Barrel. 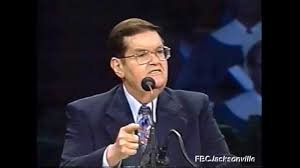 Homer Lindsay, Jr. was not as visible as some of the great pastors of the 20th century, but his allegiance to biblical inerrancy and his example as a faithful pastor and soul winner must not be forgotten.

“He and Shirley live in the same single-family home in Arlington that they purchased 30 years ago when he returned to Jacksonville. It’s valued at just over $100,000. If the Lindsays socialize with anybody, it’s their family, who all reside in the Jacksonville area.”

When he was executive director-secretary of the Florida Baptist Convention, John Sullivan said, “His church regularly baptized more persons than any other church in. Dr. Lindsay believed and preached the Bible consistently. You never wondered about his commitment to the Bible as God’s Word. First Baptist Church was his life; integrity was his character; and a godly walk was his desire.”

On September 5, 1981, Homer G. Lindsay, Sr. died of cancer, and in 1982 Jerry Vines joined Lindsay as co-pastor. In 1993, the congregation moved into the present auditorium with a seating capacity of nearly 10,000.

The spacious worship center at First Baptist Jacksonville was generally filled for the much-heralded annual pastors’ conference. Homer Lindsay gave his full support to the conference although Jerry Vines was the one who implemented the event.[/caption]

Through the eyes of Jerry Vines

The Christian Index is grateful to Dr. Jerry Vines for allowing us to interview him in order to personalize and amplify this biographical profile:

The Christian Index: We know that Homer Lindsay, Sr. greatly influenced his son. Summarize how he did that. Were there other major influencers in his life?

Vines: Homer, Sr. was a great influence in his life. He motivated Homer, Jr. to be all God wanted him to be. Evangelist Eddie Martin taught him how to be a personal soul winner.

The Christian Index: What was Homer’s ministry like at Northwest Baptist Church in Miami?

Vines: He became pastor of the church when it was just beginning. He led it to become one of the largest churches in Florida. It led the SBC in baptisms one year during his pastorate.

The Christian Index: How did he come to the decision of calling you as his co-pastor at FBC in Jacksonville?

Vines: He and I prayed about it for two years. We both became convinced this was God’s will. I was elected by the church to come as co-pastor – co-equal in every way.

Vines: It worked very well for us. The things he didn’t like to do, I did, and vice versa. He worked primarily in the educational area, the evangelism, and youth. I focused on study and preparation to preach, along with the music ministry. There really weren’t any challenges, though I am not sure it is a model that will work for many men. 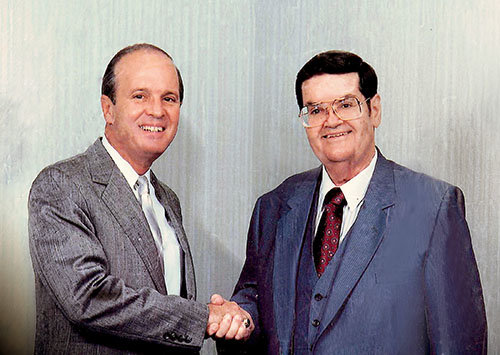 Jerry Vines and Homer Lindsay, Jr. made their roles as co-pastors work, because their gifts complemented each others. FBCJ/Special

The Christian Index: Most pastors have some eccentricities. Did Homer have some idiosyncrasies that you observed?

Vines: Homer was rather shy and withdrawn. He used to say, to me, “When I walk in a room and say, ‘Hello,' I don’t know what else to do.”

Vines: He was strong in church growth and evangelism. I hesitate to say much about his weaknesses. I think he would say that he didn’t preserve the results of his study better and would have outlined his messages.

The Christian Index: What was the church’s greatest experience during Homer’s years at FBC Jacksonville?

Vines: Beyond question, He focused his ministry on great evangelistic outreach. He had an amazing heart for winning people to Christ.

The Christian Index: What role did Homer have in establishing and implementing the pastors’ conference at Jacksonville or did he play a key role in the conference?

Vines: He asked me to start and organize the Pastors’ Conference. He was fully supportive of everything I did.

The Christian Index: How did he prepare for his preaching responsibilities? Did you work with him in planning your preaching schedules so as not to preach on the same text or book of the Bible during the same period of time?

Vines: He prepared, but probably would have said he should have prepared more. We actually never had to plan our preaching schedules. The Lord seemed to lead each of us in what books of the Bible to preach. We never overlapped.

The Christian Index: Describe Homer’s leadership ability at staff, deacon, and church business meeting (I am not assuming that he provided leadership at those meetings, but if he did, I would like to know how he handled those meetings).

Vines: We had a fairly small ministerial staff. He and I led the meetings ourselves. He was firm, direct, but fair.

The Christian Index: What role did Homer play in the Conservative Resurgence? He did not seem to have the visibility of many of our strong conservative leaders.

Vines: Homer was vitally involved in the Conservative Resurgence. Though not as visible as some perhaps, he was fully supportive and joined me in sending money to finance newspapers, mass mailings, and holding meetings

The Christian Index: What were some humorous things Homer did or said that you remember?

Vines: Homer was great fun to be around. He had a natural sense of humor. His stream of consciousness style of preaching caused him to say whatever came to mind at the time. That could be hilarious in the pulpit. I remember one youth camp he “generously” offered his cabin to me so I could finish our evangelism school lessons. He was willing to “sacrifice” and stay at the middle school camp. I was unaware at the time that he moved to an air-conditioned cabin and I got his cabin with no air.

At the time of Lindsay’s death, First Baptist had 26,000 members, 18 ordained ministers, an annual budget of more than $9 million and a full-time staff of 142. Its land and other assets were valued at about $60 million. The church was a perennial leader in baptisms in the Southern Baptist Convention. Paige Patterson stated that Lindsay was “the most singularly focused man that I have known in [my] life – one of the greatest soul-winners of all Christian history.”

Homer G. Lindsay, Jr., at age 72, died on February 13, 2000 as a result of complications from cancer. He was diagnosed with lymphoma on February 4, just one day after the funeral of his son, Homer Lindsay III, age 38. The younger Lindsay died January 28 after suffering a heart attack.

This quiet, unassuming, unpretentious servant of God did not seek publicity or greatness on this earth, but at the judgment seat of Christ it is doubtless that when his works are placed in the fire for testing they will come forth as gold, silver and precious stones.