How old is the earth? Ask Kurt Wise. 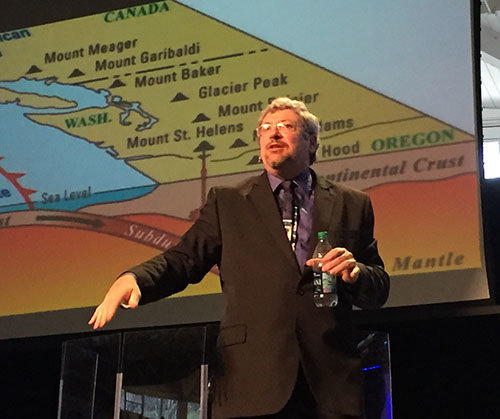 CLEVELAND — From the very first schools in the American colonies creation was taught, because people believed in the literal interpretation of the Bible and the infallibility of the Scriptures. However, the scientific theory of evolution began to emerge in America’s public schools in the 1860s. It did not take long for this “theory” to be widely accepted in the United States school systems.

After World War I the clash between fundamentalist and modernists produced a surge of opposition against the idea of evolution. Several states, including Tennessee, passed legislation prohibiting the teaching of evolution. John T. Scopes decided he would teach evolution in defiance of the Tennessee law.

Scopes was arrested and his trial was held in Dayton, TN in 1925. William Jennings Bryan, three-time presidential candidate, argued for the prosecution and Clarence Darrow, the famed defense attorney, defended Scopes.

The famous trial that actually pitted fundamentalism against modernism achieved cinematic history in the 1960 film Inherit the Wind, a thinly-disguised rendition of the much-publicized trial.

Fast forward the evolutionary debate to 1987 and you will discover that the Supreme Court ruled states may not require public schools to teach “creation science." The court’s decision dealt a crushing blow to a once-growing movement in the South to put the biblical view of creation on equal standing with the theory of evolution in public education.

The leadership and faculty at Truett-McConnell College are not looking for equal standing on controversial issues – they are looking for the truth and have every intention of upholding the truth and teaching it.

Kurt Wise is a young earth creationist who serves as the director of the Creation Research Center at Truett McConnell College. He has a PhD in geology from Harvard University. He is known for his writings in support of creationism as well as his work for the Creation Museum.

Earlier this month Wise spoke in chapel at TMC for the Genesis Lectures and used volcanoes to illustrate his linear view of history as opposed to the cyclical view of history supported by classical thought. To explain his young earth view of creation Wise contended that there was enormous volcanic activity prior to and just following Noah’s flood, but that fewer and less catastrophic volcanoes have been erupting in the last 4,000 years.

Wise contends that catastrophic plate tectonics is the scientific explanation for the worldwide flood in Noah’s day. And there is a wealth of new data, mostly from the ocean bottom, that has precipitated the acceptance of plate tectonics as a technically credible defense of the Genesis Flood.

Wise asserts, “Catastrophic plate tectonics has enough power to pulverize thousands of cubit kilometers of rock and drop ash over areas the size of continents. [In plate tectonics] we’ve got something that is powerful enough to exude millions of times as much lava as Mount St. Helens did in a few days.

“It has the earth’s interior moving, rotating fast enough to bring material up to the surface to produce our kimberlites and crack the earth’s surface over thousands of kilometers and produce enough lava on the surface to create the flood besalts (volcanic eruptions that cover the ocean floor with basalt lava).

“But there is a side effect to this phenomenon. It does all these things, but it also, by our estimation, raises the sea level by about one mile, flooding the earth’s surface with a global flood. So, the only way we know of to explain the account of these volcanoes is the global flood spoken of in Genesis 6-9.”

Robert Bowen, chair of the Division of Science and Mathematics and assistant professor of Biology at Truett-McConnell, elaborated on his belief in the importance of his division being committed to the young earth view of creation in a full interview with The Index.

Bowen explained, “A young earth view of origins is important because it is the only view that fits God’s words spoken in Genesis 1-2, in the Psalms, and throughout the Bible collectively. Standing firm on the semantic and grammatical requirements of the Hebrew language of the Old Testament and avoiding “stretching” the text to fit any preconceived ideas or scientific theories must lead one to conclude that, in fact, the Hebrew word for day (Yom) is a 24-hour time period and the genealogical record indicates 6,000 years – up to 10,000 years if we account for skipped, non-recorded generations.”

Wise's lecture can be viewed below.