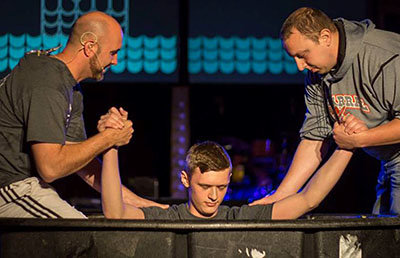 NASHVILLE (BP) — Southern Baptist congregations saw an increase of more than $82 million in overall giving in 2018, according to the latest Annual Church Profile (ACP) report. However, other key metrics declined slightly in 2018, including baptisms, membership, average worship attendance and total number of Southern Baptist churches.

Bryan Wiles (left), pastor of H2O Church on the campus of Bowling Green State University, baptizes Jon Froman, as one of Froman's cousins assists in the celebration of obedience to Christ. BAPTIST PRESS

The number of churches cooperating with the Southern Baptist Convention declined by 88 to 47,456 or 0.19 percent. Southern Baptists also reported 4,085 church-type missions last year, a decline of 291 or 6.65 percent. The number of churches and missions combined is 51,541 congregations. The ACP is compiled by LifeWay Christian Resources in cooperation with Baptist state conventions.

"Part of the Annual Church Profile process is for associations and state conventions to connect with each congregation and to confirm they still exist and are cooperating together in ministry," said Scott McConnell, executive director of LifeWay Research. "This year several states put extra effort into identifying and confirming cooperating churches, revealing the decrease in the number of congregations."

McConnell noted that while the ACP offers a snapshot of the Southern Baptist Convention, it does not tell the whole story. Seventy-six percent of Southern Baptist churches participated in the 2018 ACP by reporting at least one item on the profile. Almost a quarter of churches did not report any information.

"The percent of churches reporting in 2018 is up two percentage points from 2017 but lower than the three previous years (2014-2016) when we had 77 percent participation," he said.

As in previous years, reported totals do not include all of the activity of Southern Baptist congregations, though the summary does include adjustments in some categories for non-reporting congregations.

"Seeing our neighbors or children follow Christ in believer's baptism has never been something to take for granted," McConnell said. "Every baptism reported signifies change that only the Holy Spirit can bring about. Southern Baptists are blessed to have seen these lives transformed. We pray God will continue to move and that He would empower us to share the Gospel with more people in the coming year."

Ronnie Floyd, president and CEO of the SBC Executive Committee, agreed, "While this report contains news that concerns us greatly, we need to celebrate every life who was positively impacted by the Gospel.

"As we look forward," he said, "it is time to press reset spiritually and strategically in the Southern Baptist Convention. Prioritizing and elevating the advancement of the good news of Jesus Christ into every town, city and county in America, as well to every person across the world, must be recaptured by every church. Urgency is not an option for any of us as Christ-followers. People need Jesus and they need Jesus now. Our generation of Baptists must believe and determine now that we will do whatever it takes to present the Gospel of Jesus Christ to every person in the world and to make disciples of all the nations."

Giving through the SBC's Cooperative Program is not included in the ACP statistical summary. Those totals are available through Baptist state conventions and the SBC Executive Committee which processes the mission gifts.

Individual congregations voluntarily report their ACP data to their local Baptist associations and/or their state conventions. National statistics are compiled and released when all cooperating state conventions have reported.

Carol Pipes is director of communications for LifeWay Christian Resources.