Stemming the Tide of Theological Liberalism

Stemming the Tide of Theological Liberalism

The life’s work of Paige Patterson

Note: This is Ron’s third article approaching the 40th anniversary of the Conservative Resurgence (1979-2019). The first article is located here and the second can be found here.

Why would God use the most gruesome contraption of death ever devised by depraved humanity as an instrument in his Son’s atoning sacrifice? Nevertheless, this blood-spattered spectacle, complete with scourging and mallets pounding spikes into raw flesh, lies at the core of Christianity.

The Holy Spirit gave the Greek word skandalonto the Apostle Paul when writing his first letter to the Corinthian church, which points to the cross of Jesus as scandalous or a cause of offense to the Jews and foolishness (folly or moronic) to the Gentiles. (I Cor. 1:23).

Some seek to dull and domesticate the scandalous cross of Christ! They wish it were prettier, more palatable.

Keith Getty and Stuart Townsend wrote these words in their acclaimed song "In Christ Alone": “Till on that cross as Jesus died/the wrath of God was satisfied.”

Liking the tune but not the text, the hymnal committee of the Presbyterian Church (U.S.A.) wanted to publish "In Christ Alone" in their new hymnal in 2012 with the proviso of a lyric change.

They wished to delete the words “wrath” and “satisfied” to sing: “Till on that cross as Jesus died/the love of God was magnified.” Their request was denied; for that reason, the committee dropped the popular song from their hymns list.

One source contends the word “satisfied” was more problematic to them than “wrath,” explaining it referred to a specific view of theology they reject.

In places like Waterloo and Gettysburg, the tide of history was turned through decisive battles. In the Southern Baptist battle for the Bible (and the blood) during the Conservative Resurgence, turning points occurred stemming the tide of theological liberalism. One small turning point took place in New Orleans, LA, in 1987.

Was the wrath of God satisfied? What do Southern Baptists say?

In 2013, Dr. Al Mohler penned an article entitled "The Wrath of God Was Satisfied: Substitutionary Atonement and the Conservative Resurgence in the Southern Baptist Convention" showing how “the substitutionary nature of Christ’s death on the cross was a major issue in the Conservative Resurgence.” He also highlighted the important work of Dr. Paige Patterson and his debate with Dr. Fisher Humphreys in 1987. 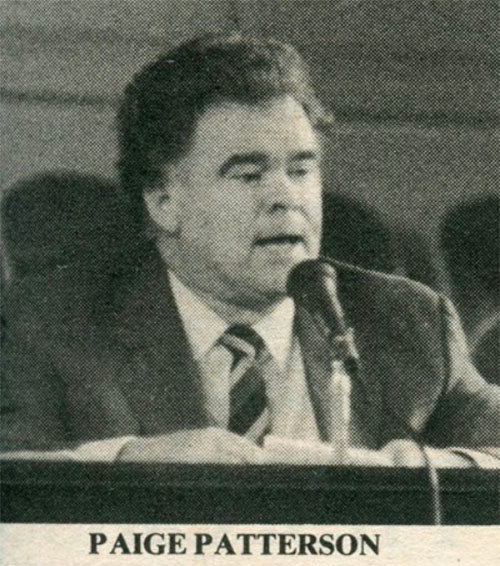 Mohler lays out the history concerning three professors at New Orleans Baptist Theological Seminary from approximately 1949-90: Theodore R. Clark, Frank Stagg, and Fisher Humphreys. He states these men “attempted to shift Southern Baptists away from the advocacy of penal substitutionary atonement.” Mohler is careful to point out that although NOBTS “was by no means the most liberal of the Southern Baptist seminaries at the time” and indeed “it would not tolerate such teaching now.”

Clark was fired in 1960 after the publication of his controversial book Saved by His Life: A Study of the New Testament Doctrine of Reconciliation and Salvation where he “argued that Christians put far too much emphasis on the death and resurrection of Christ as the foundation for the salvation of sinners” and “denied that the righteousness of God and the righteous demands of the law required a penal sacrifice.”

The word penal pertains to Christ being punished or penalized in the place of sinful humanity; he endured a punishment we deserved.

Both Staggs and Clark “denied the inerrancy of the Bible” which seems to follow a pattern of those downplaying or denying penal substitution of the atonement.

What about the third professor?

Dr. Humphreys wrote a book in 1978 entitled The Death of Christ where he “conceded that there could be a healthy understanding of substitution, but he emphatically denied that the Father punished the Son for our sins on the cross.” Thus, a theological tiff ensued between Patterson and Humphreys for almost a decade before the debate.

Around 300 students, faculty, and pastors came to watch the three-hour debate hosted by NOBTS on October 19, 1987. Dr. Patterson, the leader of the Conservative Resurgence and president of Criswell Center for Biblical Studies (now Criswell College), was the outsider whereas Dr. Humphreys enjoyed the home field advantage.

Although the event sought to promote understanding and peacemaking in the SBC, Mohler states “the lengthy debate revealed a deeper divide over the nature of the atonement than many Southern Baptists had been prepared to acknowledge.”

Patterson was clear in his support of penal substitution as the biblical model for what Jesus accomplished on the cross. He used both Old and New Testament texts, while depending heavily on the OT sacrificial system. Humphreys used a non-biblical model of the atonement drawn from a model of human relationships he called “cruciform forgiveness.”

Patterson received a standing ovation at the end of the debate for declining to sign a statement of agreement unless the significant points of disagreement were included.

Looking back on the debate, Mohler states, “It appears that the main issue was the centrality of substitution and the fact, as Patterson rightly insisted, that all understandings of the cross in the Bible are themselves dependent on penal substitution.”

In the years that followed

Messengers of the Southern Baptist Convention meeting in Atlanta in 1999 passed a motion requesting SBC president Paige Patterson to appoint a blue-ribbon committee to review the Baptist Faith and Message and bring recommendations to the next convention meeting in Orlando.

With Adrian Rogers appointed as chairman of this stellar committee, one of the noteworthy changes made in 2000 to the BFM was the addition of “substitutionary” in the following sentence under the section on the Son of God: “and in His substitutionary death on the cross He made provision for the redemption of men from sin.”

Southern Baptists passed a resolution in the 2017 SBC meeting in Phoenix to “reaffirm the truthfulness, efficacy, and beauty of the biblical doctrine of penal substitutionary atonement as the burning core of the Gospel message and the only hope of a fallen race.”

As we approach the 40th anniversary (1979-2019) of the Conservative Resurgence in the SBC, we must not forget those who helped stem the tide of theological liberalism in our seminaries and colleges, especially Dr. L. Paige Patterson.