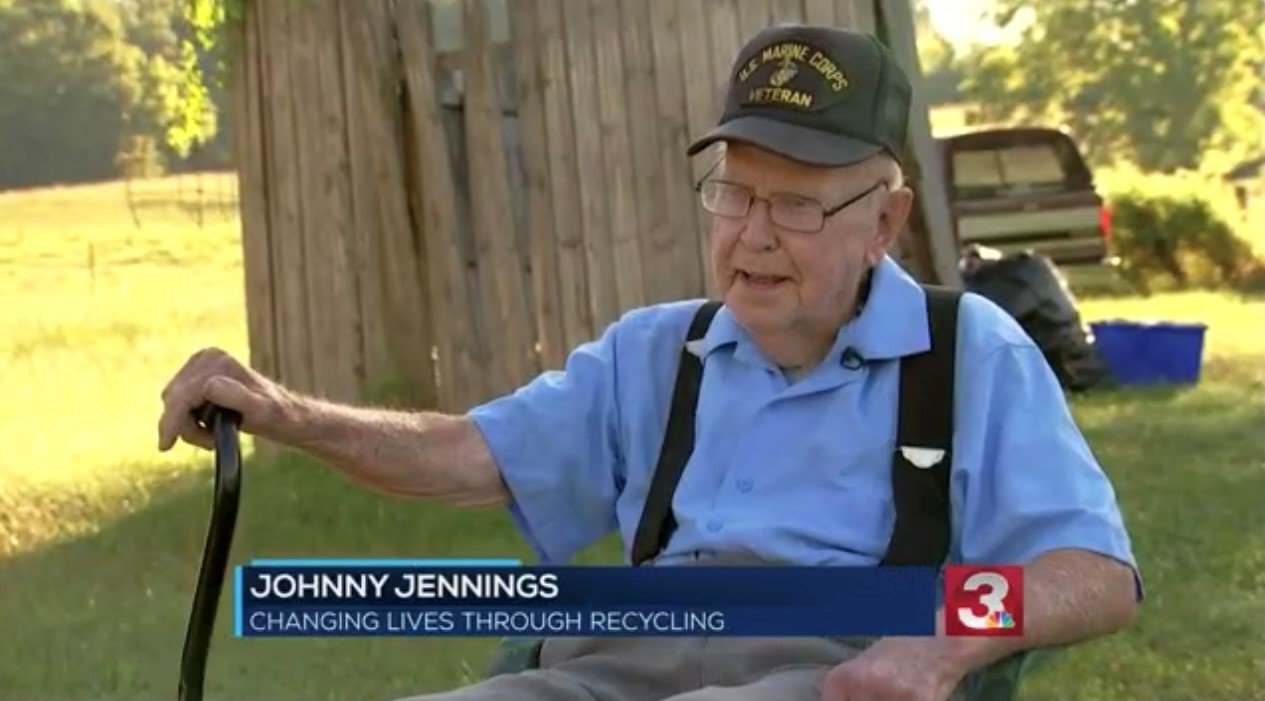 RINGGOLD, Ga. – A 90-year-old Ringgold man has raised more than $400,000 over the past 36 years for Georgia Baptist Children’s Homes by collecting and selling aluminum cans and recyclables.

WRCB-TV featured Johnny Jennings in a segment last week, describing him as a true believer in the phase, “one man’s trash is another man’s treasure.”

“It’s not a job, it’s a blessing,” Jennings told the TV station.

While recycling is good for the environment, Jennings told WRCB that it’s also a way to help others in need.

He started recycling when his only child, Brent, was a little boy.

The father and son would collect cans and newspapers, sell them and put the money into a savings account for a down payment on Brent’s first house. When Brent moved out in 1985, his dad kept going.

In the feature, WRCB-TV showed lots of video of Jennings collecting and crushing aluminum cans.

“Dad has said for years, you find your talent and then you give it away,” Brent told Channel 3.

The TV station said Jennings has collected $422,000 from recycling and has given it all to the Georgia Baptist Children’s Home. Jennings says he first visited the Christian ministry for families and children when he was a teenager and it changed his life forever.

“We went to leave and three little boys grabbed me around the knees and asked if I would be their daddy, and I said I don’t know whether I can or not but I’ll do all I can,” Jennings told WRCB-TV.

He has kept his promise for all these years.

“I’ve said for a long time, he's my dad but he is a dad to thousands of children,” said his son Brent.

In the heartwarming feature, the TV station said when people started to hear what he was doing they would show up at Jennings' house to drop off their recyclables too.

"He's made hundreds if not thousands of friends over the years by doing what he does,” Brent told WRCB-TV.

Every year Jennings delivers a check to the Christian ministry and then the process of collecting, sorting and selling starts all over again.

“It gets more loving every year,” he said.

Through the years, the TV station reported, he has worn out five pick-up trucks and many sets of tires.

He’s received numerous awards for his service, saved countless trees and now serves on the board at the children’s home. Jennings gives much of the credit to his late wife Gwen who supported his efforts. They were married for 63 years.

“He couldn't have done it without her,” Brent told Channel 3.

Even at age 90, Jennings says he doesn’t plan to stop recycling anytime soon.

“He's said for years he's going to do it until the undertaker turns his toes up,” Brent said.

He says he believes that is why his father has lived such a long and healthy life. He found his purpose.

“It’s a blessing to help others that need the help. That's where I get my blessing,” said Jennings.

“My Johnny Jennings has a heart for children, youth, and families in need," said Kenneth Thompson, president & CEO of Georgia Baptist Children’s Homes and Family Ministries Inc., told the TV station. "Through his recycling efforts and by serving on our Board of Trustees, he demonstrates his commitment to helping others. He is truly a blessing to Georgia Baptist Children’s Home and a vital partner in our ministry to children and families in Georgia."

Anyone who would like to make a donation in honor of Johnny Jennings can do so by mailing a check to the Georgia Baptist Children's Home at P.O. Box 329 Palmetto, GA 30268.