A father's lesson to sons in ministry: 'Spiritual matters are most important'

BUFORD — The term “like father, like son” is an idiom used when different generations of a family behave in the same way or have the same talents or defects.

Proverbs 23: 24 says: “The father of the righteous shall greatly rejoice, and he that begetteth a wise child shall have joy of him.”

Tommy explained, “The way I influenced Stephen and Tommy, Jr. with church life and convention life is by being involved myself. Since Stephen is a senior pastor I have particularly encouraged him to be involved. In fact, we have always ministered together as a family.

“When I was at Second Baptist Church in Columbus our family served together there for eleven years. I believe Stephen and Tommy Jr. got their heart for ministry on the drug-infested streets of a community called North Highland. They passed out fliers and participated in a weekly ministry called Saturday School, which was a service to the children/youth in the community.

"Stephen played on the church basketball team, which went undefeated for several years – a team that was made up of kids from the projects and mill housing. Stephen has attended many conventions with us. He was there when I was on the platform as a vice president in Perry when 6,000 messengers were evacuated due to a bomb threat.

“The way I influenced Stephen and Tommy, Jr. with church life and convention life is by being involved myself."

“Stephen has a sincere heart for the ministry and mission of Georgia Baptists. I have always told the boys, 'To make an impact or to make a change in convention life, you have to be involved.'

“Dianne led Stephen to Christ when he was five years old. I licensed him to preach when he was 15 and ordained him at age 20. He served on staff with me when I was in south Alabama.

"Today I am most honored when the boys use some of my ministry ideas and make reference to my leadership in their preaching. I have tried to teach Stephen the importance of having good people skills; and I know he loves the Lord, but he also has a great heart for people. Stephen has a heart for Buford and I believe Buford has a heart for Stephen.”

The senior Fountain has led Grace Baptist Church to increase their Cooperative Program giving from one percent to 5.5 percent in just two years. The Grace pastor stated, “Harris Malcom, the interim pastor before I became pastor at Grace, taught the people the importance of giving to the Annie Armstrong and Lottie Moon missions’ offerings. He also introduced the church to Georgia Baptist missions and ministries. Allen Hill, our missionary in the Appalachee Association, came one Sunday and taught our adults and students about the Cooperative Program."

Stephen has picked up the gauntlet from his dad and has led First Baptist Buford to increase their giving through the Cooperative Program from five percent to ten percent.

Stephen continued, “We can take mission trips and have long-term missions partnerships, but there is nothing like having boots on the ground in perpetual ministry, having our missionaries investing in a people group on a daily basis, and pouring their entire lives into reaching that people group with the Gospel. For Southern Baptists, the best way to make that happen is through the Cooperative Program." 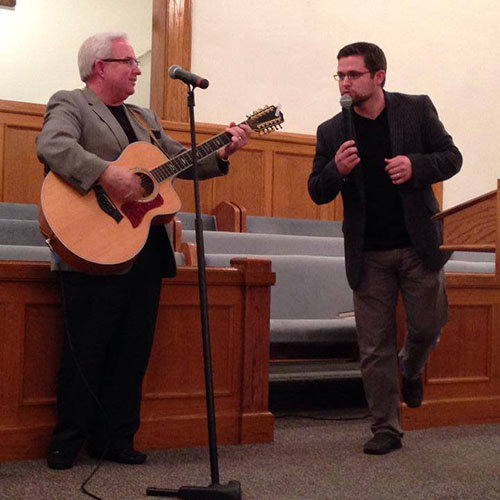 While establishing their own ministry styles, it's not hard to spot the lessons Tommy Jr., and Stephen, above singing with his dad, have been taught by Tommy and Dianne Fountain. FOUNTAIN FAMILY/Special

“There is a picture frame on my desk facing me that my Dad gave me that reads, ‘Spiritual matters are most important.’ I have heard my Dad say that hundreds of times and I believe it. As a pastor leading a local body that sits at the top of the Southern Baptist pyramid, above the state convention and the national convention, I want my church to give to the CP, because that is the best way we can impact eternity.

“I learned a long time ago that you have to speak the language of your people. I benefitted from the foresight of my predecessor to form a missions committee and have spent the last year alongside our worship and missions pastor, Chad Todd, building a missions strategy.

“Founded in 1873, First Baptist Church is a very established church; and my leadership is much more effective if I lead through laypeople. It didn’t take very much to convince our Missions Committee of the need to give 10 percent to the CP. They made the recommendation to our Finance Committee, who gave their approval. They might have approved it coming from just me, but coming with the weight of the Missions Committee behind it made it that much easier for them.

“By the time it got to the church body it was a done deal. I had shown the CP video 'The Power of And' – which happens to be one of the best videos Georgia Baptists have produced – and spent many weeks just educating our people on why we are Southern Baptist and why we support the Cooperative Program. Our budget was overwhelmingly approved."

Stephen added, “I am grateful that our people have graciously followed my leadership. We have many people in our church who have been Southern Baptist for years. They understand the Cooperative Program and excitedly support it.

“However, we also have a ton of new families, young and old, who had no idea about Southern Baptists. We have one young lady who has been visiting us whose husband told her the first day they came that he was pretty sure she had to wear a dress to church, because we were ‘Baptists.' It has been fun to watch her and talk to her as they are learning that being Southern Baptist is a good thing.

“As Southern Baptists we have a greater international footprint than the churches around us that have thousands in attendance – and my people are beginning to believe that.”

To younger pastors Stephen says, “We need your voice in our convention. Give to the Cooperative Program effectively and trust the people that a sovereign God has placed in leadership to use it wisely.”

Stephen’s Dad emphasized, “I have tried to pass along to our two preacher sons and my nephews in ministry the need to be conservative in theology, to have integrity in ministry and to be a personal soul winner. I hope they all know that ‘spiritual matters are most important.’”