A groom, a lawyer, an ambulance driver among Ethiopia's dead 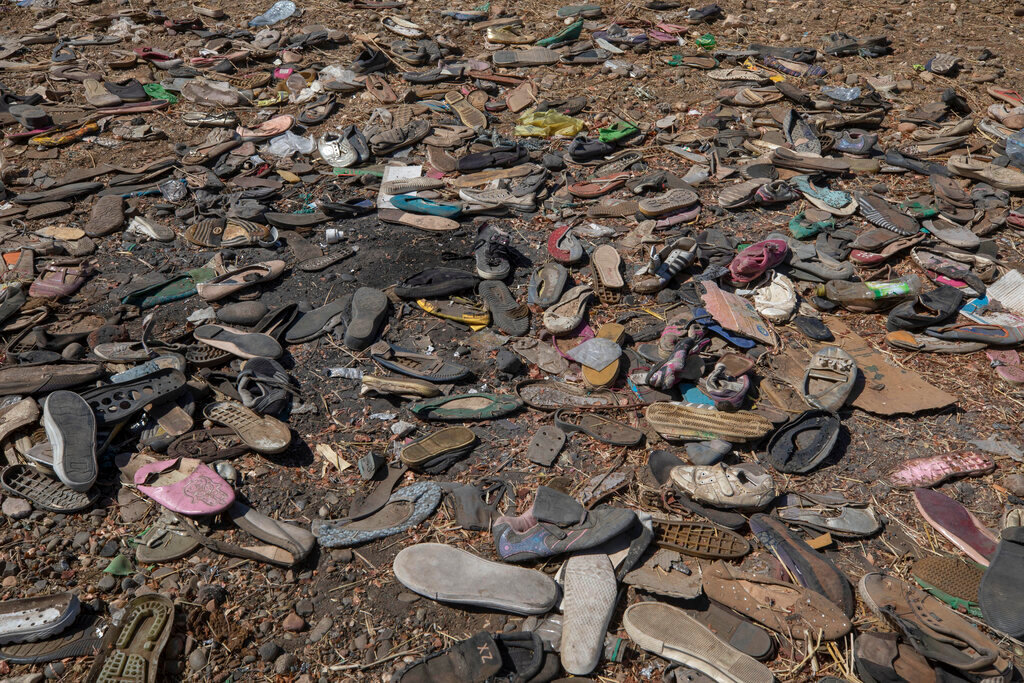 FILE - Shoes left behind belonging to Tigrayan refugees are scattered near the banks of the Tekeze River on the Sudan-Ethiopia border after Ethiopian forces blocked people from crossing into Sudan, in Hamdayet, eastern Sudan, Dec. 15, 2020. Thousands have died in Ethiopia's brutal year-long war that began in Tigray. The death toll is one of the biggest unknowns of the war. (AP Photo/Nariman El-Mofty, File)
Nariman El-Mofty
Posted Monday, November 15, 2021 8:28 am
By CARA ANNA, Associated Press

NAIROBI, Kenya (AP) — A groom at his wedding, a construction worker and father of four, an ambulance driver: All three are among the thousands who have died in Ethiopia’s brutal year-long war that began in Tigray.

The death toll is one of the biggest unknowns of the war. But a man in the diaspora has confirmed the deaths of more than 3,000 ethnic Tigrayans, the victims of much of the violence as Ethiopian and allied forces fight Tigray ones.

On the other side, a diaspora group has confirmed close to 2,000 deaths of ethnic Amhara as Tigray forces push toward Ethiopia's capital. Experts call both tallies a small fraction of the true toll.

Here are some of their stories:

The soldiers came to Mulugeta Girmay’s home in Tigray while he was watching television with his wife and child. They took him away, beat him and left his body outside the police station.

Girmay Tesfay, his brother in Germany, wishes he knew more. But phone access to Tigray is often cut off and the government is accused of listening in on calls.

“My cousins say, ‘We are afraid of telling you everything by phone,’” he says.

Girmay was delighted when Abiy Ahmed became Ethiopia’s prime minister in 2018 and introduced political reforms that led in part to his Nobel prize the following year. But the war, and Ethiopia’s harsh treatment of ordinary Tigrayans, has changed Girmay’s thinking.

Life, and love, have continued despite the war. In late January, Zeray Asfaw was celebrating his wedding in a village outside the holy city of Axum.

But Eritrean soldiers allied with the Ethiopian government came to the house where the wedding party had gathered, a friend recalls. They locked the women inside, then killed all the men, according to the friend, who spoke on condition of anonymity for fear of retaliation. The soldiers forbade the survivors to bury the bodies for three days.

The best man, construction worker Ezgineamin Legesse, was among those killed.

“He had nothing to do with politics,” the friend says. “He had two kids. Hardworking. I was angry. I still hurt.”

He has lost at least 10 of his own friends and five of his family to the war.

Alemu Kassaw was a road construction worker and the father of four children. His wife says Tigray fighters found him on the street and killed him when he was trying to flee their community of Kobo in July.

“I was told over the phone by my mother’s cousin,” the wife, Shewaye Taye, says.

She had fled ahead of her husband to the city of Dessie. She thought he had escaped, but the news of his death abruptly ended her desperate hunt for him among the displaced. Now, like hundreds of thousands in the Amhara region uprooted by the Tigray forces’ recent advance, she feels lost and alone.

“I think this war is endless,” she says.

Lawyer Berhe Akelom and judge Teklit Gebrehiwet were friends and leaders in the legal community of Humera, one of the first places to see fighting.

When colleagues hadn’t heard from Berhe, they went to his home. His neighbors said Ethiopian soldiers had come to Berhe’s door, pounded on it and asked him to come out, then shot him.

“He was not a member of any political party,” Teklit says. “I think the reason he was killed was military forces in Ethiopia want to eradicate all educated people in Tigray.”

When his friend died, Teklit fled to Sudan. He has since learned that his property was ransacked, and he no longer has a home. He knows at least 30 people killed in the war, including his father and brother-in-law.

“We are not lucky,” Teklit says.

Mulu Gebremedhin, who worked at a butcher shop in Axum, was one of several hundred people killed by Eritrean soldiers in the deadliest known massacre of the war.

His younger brother, Zelalem, heard about his brother’s death nearly a month later, on Christmas Day. They killed him in front of his house, before his 8-year-old son.

The family, including Mulu’s son, young daughter and pregnant wife, had been at church when gunshots sent the congregation fleeing. They reached home, but the Eritrean soldiers found Mulu in their house-to-house searches.

“He was a good guy, a very decent guy,” Zelalem says, beginning to weep. “He never fought all his life.”

By the time he reached Mulu’s wife by phone weeks later, she had given birth to a baby boy. She had also moved from their home to flee the memories.

On Nov. 22, Amdekiros, or Andom, an ambulance driver with the local Red Cross society, was taking a woman in labor to the hospital in the town of Adwa when Eritrean soldiers stopped him.

“He tried to explain the situation, but they are very cruel,” his brother says, speaking on condition of anonymity for fear of retaliation. “They shot him.”

Andom managed to bandage his wound and take the pregnant woman to the hospital, but he bled to death. His brother, who lives in the regional capital, Mekele, didn’t learn about his death for another month or so because of poor phone connections and no public transport.

“It’s painful, you know?” the brother says. “It’s hard for every Tigrayan.”

Andom left behind two children, a boy and a girl.