A haven for victims of trafficking is being built in Albany 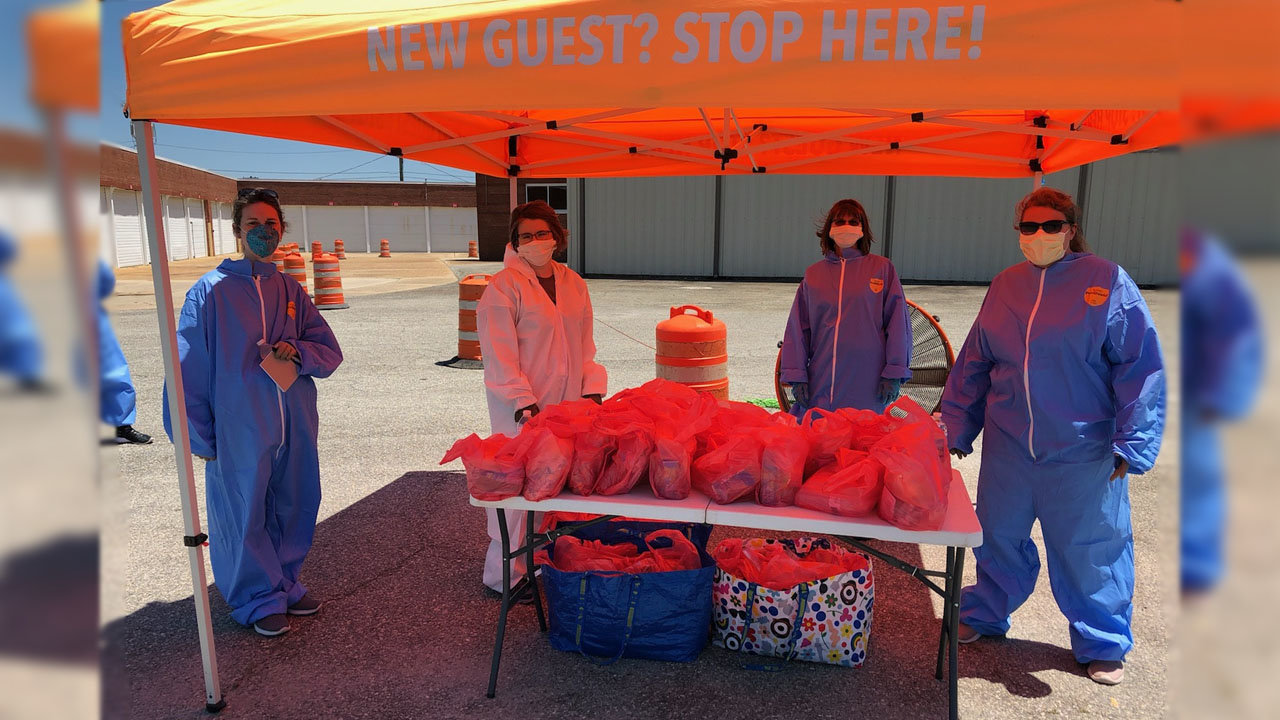 Volunteers with Rahab's Haven hand out hygiene products and other supplies in Albany on April 25. RAHAB'S HAVEN/Facebook
Posted Tuesday, May 12, 2020 10:25 am
Scott Barkley

Volunteers with Rahab's Haven hand out hygiene products and other supplies in Albany on April 25. RAHAB'S HAVEN/Facebook

ALBANY — Getting people to talk to you at a hotel known for prostitution and drugs isn’t that difficult, says Rhiannon Dobson. All the time, people are watching.

“We’ll cruise the parking lots and knock on doors. Everyone wants something for free, man,” testifies Dobson, a member of Sherwood Baptist Church and co-founder of Rahab’s Haven, a separate ministry that reaches out to the lower-income community, and in particular, those impacted by human trafficking. 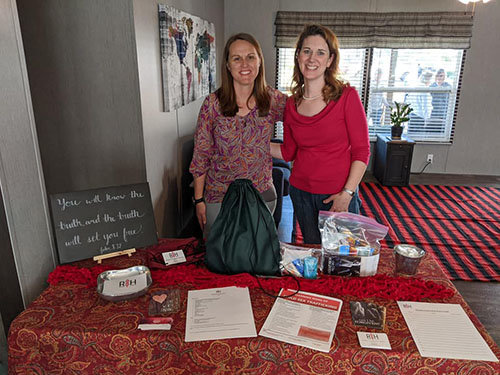 Dobson (yes, first name as in the Fleetwood Mac song) knew God had called her to minister in areas of her city that others tended to avoid. Rahab’s Haven started in the summer of 2018 with her friend Karma Scardino, whose husband, Mark, serves as children’s pastor at Sherwood. Their motivation from them hasn’t changed – tell others about Jesus.

“We didn’t realize the extent to which this ministry would go,” says Dobson. “We were just two mamas who went with our children and felt a younger generation needed to hear the Gospel.”

That began with hosting Backyard Bible Clubs almost anywhere they could find an unoccupied patch of grass. Whether in public parks or local housing projects, the two and their children would lead in games and stories.

“We felt called by the Great Commission as believers,” Dobson adds. It began with a day at the lake when she heard their kids talking to some others. One of her children had been singing a song about Noah’s Ark, piquing another’s curiosity. That led to a Gospel conversation, which turned into a few of the other kids praying to become believers.

Going to those who won’t darken the doors

That child’s unfamiliarity with a part of Scripture so well-known by herself struck Dobson.

“It made us realize there’s a generation that’s not going to come into our churches. That led to the backyard Bible clubs. They were simple, man. We’d hand out freeze pops, Bibles, and share the Gospel. Other kids started bringing their moms. Many of them were women working on the street.” 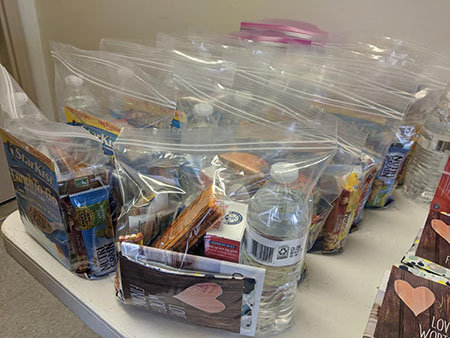 Gift bags have remained a staple of the outreach efforts of Rahab's Haven. RAHAB'S HAVEN/Facebook

Dobson had previously worked with jail visitation and similar ministries. Those experiences over the years fed a hunger to work among those in Albany caught up in human trafficking. So, following the summers of backyard Bible clubs she and Scardino would drive around looking for women who needed food and/or feminine hygiene products.

“It started out with just a bottle of water,” Scardino remembers. “Then, we saw a spark in our children’s eyes when they shared the Gospel.”

That eventually led to the work today that still includes a bottle of water and hygiene products, but also perhaps something to eat at that moment and other supplies. Over the last few months medical and cloth masks have been readily received.

The name for their organization – Rahab’s Haven – points to the prostitute whose story is told primarily in the second and sixth chapters of Joshua. It focuses on a place of security, a safe haven. First, Rahab’s home that was built into the wall of Jericho kept the two Israelite spies safe. Later, as Joshua led his army into the city, Rahab and her family were kept safe there upon the promise of the spies. 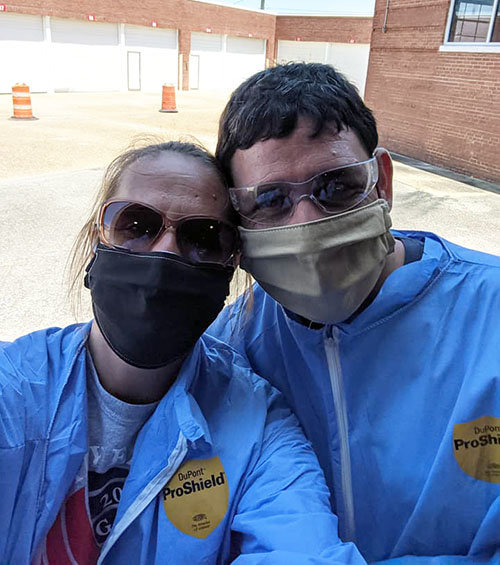 Rhiannon Dobson and her husband, Scott, don protective gear for a giveaway through Rahab's Haven on April 25. RAHAB'S HAVEN/Facebook

Rahab’s story contains all kinds of aspects one wouldn’t automatically align with the Gospel. For beginners, she was a “harlot,” a prostitute. Her first act was to lie to the king of Jericho to throw him off the scent of the spies. But, she would eventually become part of Jesus’ lineage.

Hurricane Michael caused Rahab’s Haven to pause for a while and Dobson to take a position at Sherwood Christian Academy. “But I got convicted that I wasn’t doing what God had gifted me – and burdened me – to do. I spent time fasting and in prayer with my husband, Scott. In the end I felt led to leave my position with the school.”

For some more training on working with those affected by human trafficking, she and Scardino spent three days at Wellspring Living in Atlanta. Then, they travelled back to Albany and the headquarters for Rahab’s Haven, located in the Hope Center of Sherwood Baptist Church.

“This ministry fits into the emphasis of Mission Georgia,” said Lorna Bius, Mission Georgia mobilizer. “As I learned about this work being done in Albany, I was encouraged to hear of their focus to bringing the Gospel in word and deed to a hurting community.”

Bius added that the Georgia Baptist Mission Board, through Mission Georgia, is currently gathering masks for Rahab’s Haven to distribute. Those interested in contributing can do so through emailing info@missiongeorgia.org.

Future plans to serve the vulnerable

Rahab’s Haven has grown in volunteers. Plans include building a restoration home where trafficking victims can spend 12-18 months for education and recovery. To help combat the coronavirus that ripped through their city over recent months, they’ve continued to reach out to those affected and held a giveaway event on April 24. On that day 110 bags were handed out in a little more than an hour. A woman who had been attending a Bible study over the phone prayed to receive Christ.

"A lot of these women are recognized for the wrong reasons. They want others to see them as a person.”

The obvious downsides brought by the coronavirus includes a silver lining. Dobson attributes an increase in volunteers to those now at home with more time to get involved.

“We just want people to be in this for Jesus. I know what Jesus has done for my life, and I want that to be for other people.”

The Haven being created for the marginalized in Albany gets bigger each week. It continues to find and include those who have experienced a hard life. And, people are watching.