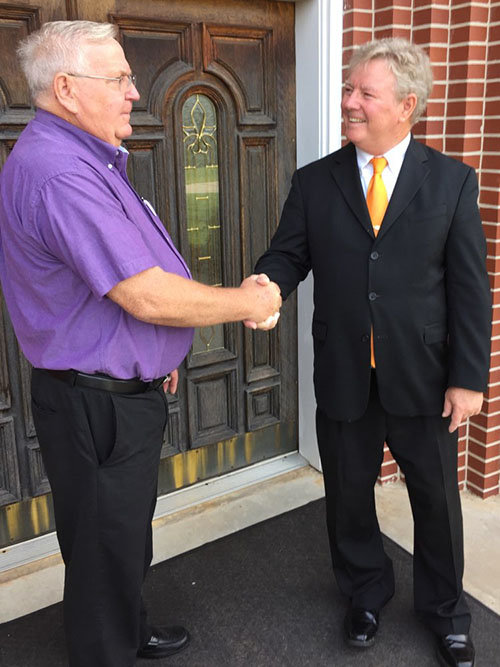 MADISON — Jeff Hicks is pastor of Beacon Heights Baptist Church and a member of the Georgia Baptist Convention Executive Committee. He is a native of Tennessee and an avid University of Tennessee football fan; and he does not try to hide his affinity for “Smokey,” the Bluetick Coonhound mascot of the Volunteers in Georgia Bulldog country.

He even dared to wear his orange Tennessee necktie to the homecoming celebration of his church on this past Lord’s Day.

Many Baptist churches still have homecoming celebrations and share a traditional dinner on the grounds or at least in the fellowship hall. It has become way too complicated to haul all those delicacies, 5-gallon jugs, folding chairs, and tables into the church yard. In the summer, the weather is too warm and the gnats are often too prevalent (especially in south Georgia) for outdoor homecoming meals.

Beacon Heights had planned a special morning worship experience for their annual homecoming on August 12. The church actually used the homecoming celebration to launch a revival meeting with Tommy Fountain, pastor of Grace Baptist Church in Monroe, as the preacher. 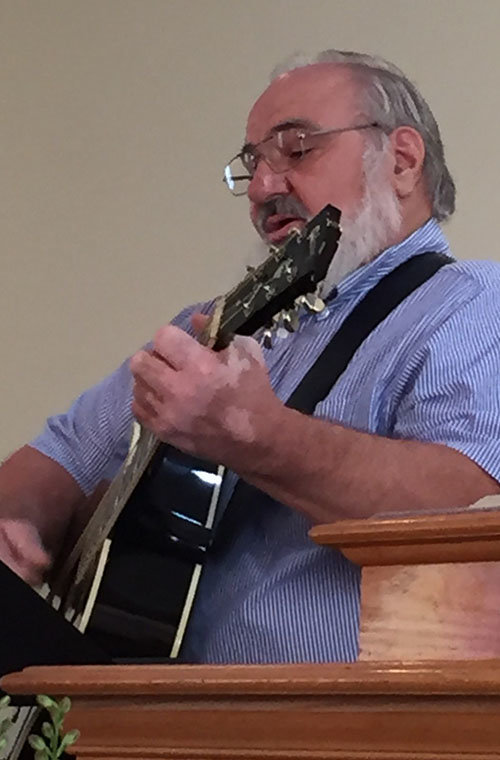 Randy Hicks plays the guitar and sings during the time of special music just prior to the morning worship service. GERALD HARRIS/Index

The Sunday morning homecoming started at 10:00 with special music provided by the church choir and various members, all of whom sang with exceptional ability and giftedness.

After 45 minutes of good ole heartfelt music the church had a 15-minute intermission, or half-time, scheduled for the purpose of fellowship and the spirit of the church glimmered with pleasantries and conviviality.

During the morning worship hour Pastor Hicks related to the congregation that the church was first organized in 1951. In those first months the church met in a home, but it did not take the members long to construct their first building. One member testified that she had been in the church from the very beginning although she started out in the cradle roll (older Baptists will know all about that designation).

Hicks stated, “The original building was destroyed by fire during an ice storm on March 4, 1960. The only thing left standing was the exterior of the three-story brick structure. Unfortunately, the church was only partially insured.

“After the fire, our current church facility was constructed later that same year. The members donated the money to construct the exterior walls of the church building and the interior was completed as the congregation was able to contribute the money to continue the project. The pastorium was built in 1963 and the educational building was completed in 1965.” 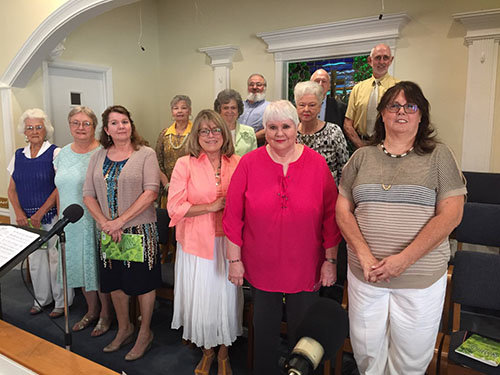 The adult choir at Beacon Heights has some extraordinarily gifted members who joyfully praise the Lord in song. GERALD HARRIS/Index

Bob Bumgarner, one of Beacon Heights faithful members, commented, “There is an interesting story behind the calling of Brother Jeff Hicks to our church. It shows how God can work in mysterious ways when his people get their prayer life in order and sincerely ask that His will be done.

“About three years ago the church’s pulpit committee was tasked with the responsibility of finding and recommending a pastor for our church. Their search was narrowed down to three candidates, all of whom seemed to be the perfect choice. When the first candidate was contacted about being the committee’s choice he said that he decided to go in another direction.

“When the second candidate was contacted he responded positively, but then informed the committee that a family tragedy had necessitated a change of plans, so he was no longer a possibility. 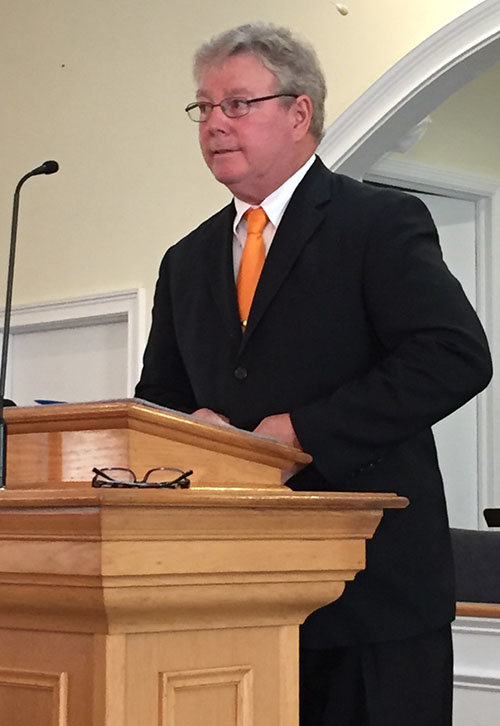 Beacon Heights Baptist Church Pastor Jeff Hicks sports his University of Tennessee tie as he recounts the history of the church on Homecoming Sunday. GERALD HARRIS/Index

“Again, after much prayer Brother Jeff was contacted again. Although he had not been a pastor for several years and had a good government job in south Georgia, he indicated that he believed God was leading him our way.

“Brother Jeff is strong on doctrine. When it comes to preaching on the challenging issues of Scripture, he doesn’t compromise.”

And yes, it must be reiterated that on Sunday, Pastor Hicks, wore a dark suit and his “Good Old Rocky Top” orange tie in his church that is only 28 miles from the University of Georgia where the accepted colors are Black and Red.

Every fall, about the time the college football season begins, Beacon Heights has a Sunday when they encourage their members to wear the colors indicating their support for the college football team of their choice. The pastor dares to wear something that is decidedly UT orange in the midst of a sea of red and black.

The “Dawgs” fans at least give him credit for standing up for what he believes athletically – and theologically. But even in spite of that contrast the homecoming was marked by great fellowship and supernal joy.