A village in India's northeast mourns after deadly attacks 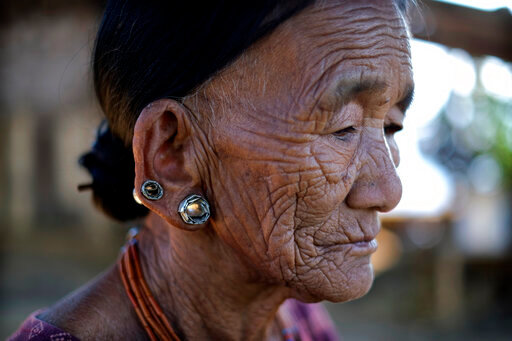 Nguntoi Konyak, 85, sits outside her home in Oting village, in the northeastern Indian state of Nagaland, Thursday, Dec. 16, 2021. "They killed innocent villagers. All the young boys of this village have been killed," Nguntoi said. High up in the hills along India's border with Myanmar, Oting village is in mourning after more than a dozen people from the village were killed by Indian army soldiers. (AP Photo/Yirmiyan Arthur)
Posted Thursday, December 23, 2021 8:40 am
By YIRMIYAN ARTHUR

OTING, India (AP) — It was 2004 when a bear mauled Nenwang Konyak in the forest in Mon district, high up in the hills along India’s border with Myanmar. The men in his village, Oting, rescued him and carried him home. He survived, thanks to them, but was left with a jagged scar running down his face.

When Nenwang heard that his village had called for a search team earlier this month to look for a group of laborers who were missing, he didn’t hesitate. He and his 23-year-old twin brothers joined them on Dec. 4, not knowing that the laborers had already been killed by Indian soldiers. Later that day, seven men in the search party were killed by the soldiers -– and Nenwang returned home without his twin brothers.

Like others in the village, he is haunted by the events of Dec. 4 and 5, when 14 civilians and a soldier were killed in a series of attacks in the northeastern state of Nagaland. Twelve of men, most of them coal miners, were from Oting village. The violence, among the deadliest to hit the state in recent years, sparked national anger and headlines -– and left Oting reeling with shock and grief.

“Even Christmas will bring no joy. Our hearts are hurting. They were our own children,” said Among, a 50-year-old Christian woman in the village.

This part of India is long accustomed to pain. The people here are Nagas, a minority group more ethnically tied to Myanmar and China than to India. Over 90% of the state’s more than 1.9 million people are Christian -- a striking contrast in a Hindu-majority country. For decades, Nagas have fought a battle for independence from India, and there are few families that have not suffered from the violence.

In recent years, the violence has ebbed but the demands for political rights have grown even as the federal government has pushed for talks with separatists. Peace negotiations began in 1997 after the Indian government signed a cease-fire agreement with the Isak-Muivah faction of the National Socialist Council of Nagaland.

In Oting, many work as farmers, except for during the lean season from November to March as the rains subside. During that time, they labor in open-pit coal mines. It is a backbreaking work. The money earned is often used to pay for school for their children, but when December comes, it’s all about Christmas.

On Saturday, Dec. 4, Shomwang, a villager, set off from Oting with food to give to the people working in his coal mine. On his way back home, he was joined by seven miners on his truck who wanted to be back in the village for the Sunday church service.

Their vehicle had barely left the mine when it was ambushed by Indian soldiers. Bullets began raining down, killing Shomwang and five others. Two remain hospitalized.

Back in Oting, the villagers heard the shooting but dismissed it as a gunfight between soldiers and Naga fighters or between rival Naga factions. But when night fell and no one had seen the laborers, a search party set out. Soon, they found the truck, empty and bullet-ridden. Barely 50 meters (150 feet) away, they saw soldiers on four trucks, one of them carrying the dead bodies of their brothers, sons and friends piled like animal carcasses on top of one another.

Enraged, they set three military vehicles on fire. The soldiers retaliated by shooting not just at the crowd, but also at stalls and shops about a kilometer (half a mile) away. By the time the last bullet was fired, 13 civilians in total and one soldier had been killed. Several were injured.

The violence continued the next day, when protesters attacked an army camp, prompting soldiers to shoot, killing one more civilian.

The army said the soldiers acted on the basis of “credible intelligence” that some of the victims were militants, but expressed regret and called it a case of “mistaken identity.” The government said it will launch an investigation. But villagers have rejected it, demanding an independent probe. They have also refused compensation offered by the government.

Nearly three weeks later, Shomwang's truck, marked with bullet holes and cordoned off by crime scene tape, still stands at the site of the attack as a reminder. A stench, foul and overpowering, hangs in the air.

The incident struck a chord, drawing hundreds of people to Oting. Officials came to investigate, others came simply to offer support and share their grief.

“The pain is unbearable,” said Naophe Wangcha, the mother of the village chief. “We just want news that the guilty have got what they deserve.”

Cries of anger have spilled beyond Oting, swelling in towns and cities across Nagaland. Since the deaths, candlelight vigils and solidarity marches have called for the revocation of the Armed Forces Special (Powers) Act, which has loomed over the region since 1958 and gives many areas the feel of an occupied territory. The act gives the military sweeping powers to search, arrest and even shoot suspects with little fear of prosecution. Nagas and human rights groups have long accused security forces of abusing the law.

On a recent Thursday, in a tiny wooden house with mud floors, an 18-year-old, Mary Wangshu, was mourning her brother.

Manpeih was the family’s only son and was pampered at home. The siblings worked in the coal mines, and were the only ones living in the family house with their parents. “I miss him,” she said. “He was my only companion at home after everyone moved away.”

Outside, her mother, Awat, was surrounded by neighbors who tried to distract her -– once, she even tried to laugh.

Grief is shared here, even if villagers processes loss in their own way. Some silently weep in their kitchens, some angrily call for justice, some share stories, some seek solace in the church. Yet they’re all interconnected, and have been, for generations. There are friendships and marriages and lifetimes that link the people here.

“Humans are not harvested from the ground. They aren’t grown wild. They come from our wombs. We care for them for nine months with physical pain, we keep them safe from mosquito bites, we give them food meant for ourselves, we send them to school with hope for their future. And then to have them killed has brought us much grief,” Among said. “We will visit their graves on Christmas morning and speak with them. We will ask their spirits to visit us.”

At dusk a few days after the killings, Shomwang’s younger brother is sitting with Nenwang and his parents around the fireplace. Both families have suffered loss but have also found solace in each other.

“It is too painful. I don’t want to talk about it,” Nenwang said softly.