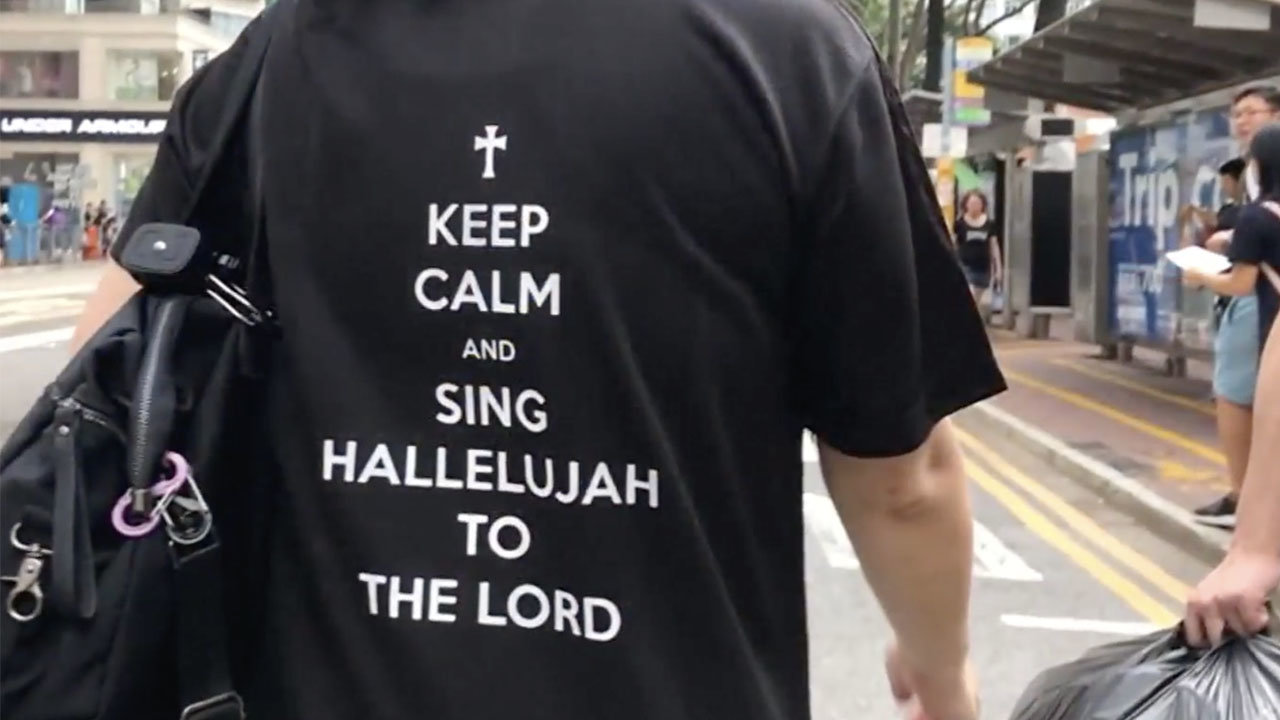 I’m very encouraged after speaking with state missionary Ricky Smith about a new opportunity for Georgia Baptist students to learn about missions. If you have a personal stake in what kind of world is waiting for our children and grandchildren, you know what it’s like to skim the headlines. Honestly, many stories come across to me as satire … until I realize they’re not. It really concerns me when I think of what the shocking news stories are going to be 10 or 15 years from now.

But then I’m reminded how it’s always premature to give up on youth, especially youth wielding the greatest power known to man.

In recent weeks a proposed law allowing extradition of Hong Kong citizens to China has brought on protests numbering as high as 2 million. And while the size of crowds can be intimidating to authorities, it’s something else garnering the world’s attention.

From a June 19 story by the New York Times:

Armed with a Bible, a guitar and a drawing of Jesus walking on water, Andrea Wong sat outside the offices of Hong Kong’s central government and booed.

Ms. Wong, 18, usually stays out of politics. But in recent weeks, as Hong Kong was swept by mass protests against closer ties with mainland China, she asked herself what a good Christian would do.

Young Christians – teens and those into their 20s and 30s – have become instrumental in the protests. While not claiming to be the leaders, they nevertheless have become prominent in calling for the extradition law to be gone.

Perhaps the most visible contribution of these young Christians – whom we would place as Generation Z and Millennials – is leading choruses of “Sing Hallelujah to the Lord.” Written in 1974 and designed for Easter, the song’s repetitive verses are easy for protesters to learn quickly. And while Hong Kong is only around ten percent Christian, it’s become the anthem for those protesting.

There are other reasons for its popularity. As one protester explained to Reuters, once the song begins the gathering becomes a religious meeting. By law, Hong Kong police aren’t allowed to interrupt such gatherings.

Christians have much to be concerned on the proposed law, since suspended but not scrapped. China is notorious for human rights abuses and being a place where Christians have been persecuted. Pastors have been jailed, churches torn down, and believers sent into hiding. Nevertheless, tens of millions of Chinese now identify as Christians.

But looking at Hong Kong, it’s remarkable what young Christians are doing. They’re pointing hundreds of thousands in their own country to Christ. Add to that the tens of millions more worldwide – courtesy of the resultant reporting – watching how singing hallelujah to the Lord can make a country stop in its footsteps.

I hold to the conviction that younger people today aren’t any dumber than you and I were at that age (though, admittedly, the Tide Pod challenge made me wonder). Seventeen-year-old Scott just didn’t have omnipresent handheld cameras chronicling his every boneheaded decision. Today, teens have grown up in a much bigger, more connected world. They’ve had to learn to navigate things I couldn’t dream of at their age. And no, they’re not going to do it correctly every time.

But give a young person the opportunity to rise to a challenge and he or she may surprise you.

In Hong Kong that challenge is possible extradition to a country where these young Christians know they will be in danger immediately. In America the challenge is a little more muted, but all the more present and dangerous.

It’s a culture moving further away from God, one growing coarser by the day. It threatens family relationships and – some will see this as simplistic – plays a big part in the youth suicide rate currently being at its highest point ever. That represents a loss of hope. We know where that hope can be found.

Gatherings such as Superwow, Impact, and Advance Missions Week are more than worship, Bible study, fellowship, and helping others. They are – together – learning to live in communion with each other and the Lord. I pray for my Christian brothers and sisters in Hong Kong, placed side-by-side with unbelievers, to communicate that this is truly why we sing hallelujah.

The challenge our young people face here isn’t one they’re supposed to face on their own. Whatever your age, you can help. Remember where I said earlier if you have a personal stake? There is no “if.” We all have a stake in this.

But if you’ve had moments where you wonder if there are any solid, committed young believers, look to the other side of the world. Then, take a look at your local church. They serve the same Lord. And when the challenge rises, I believe they’ll answer the call.