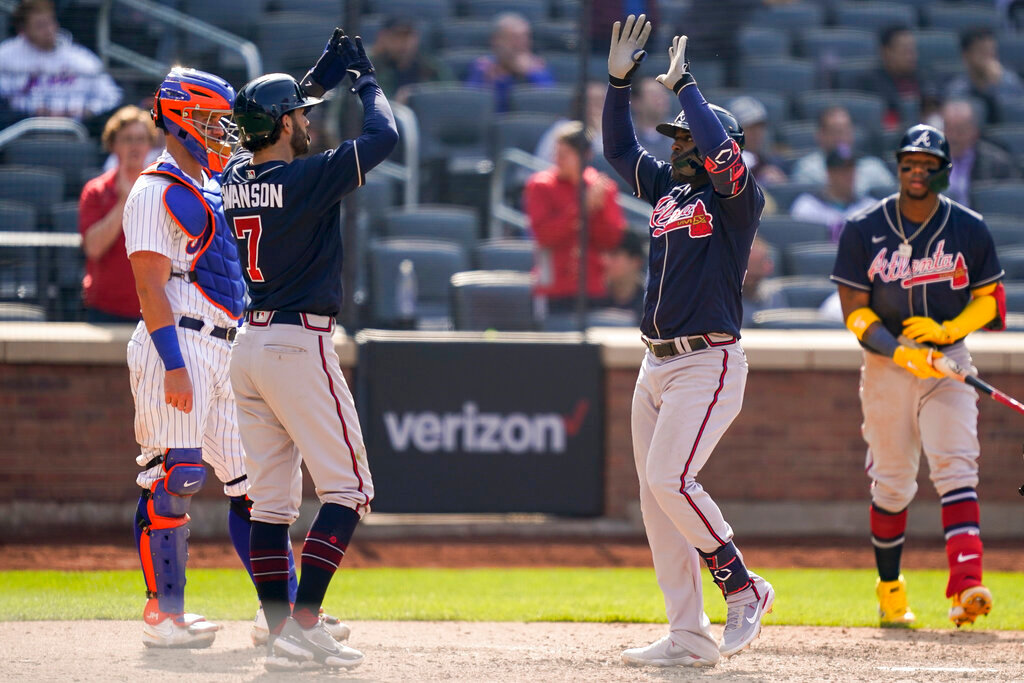 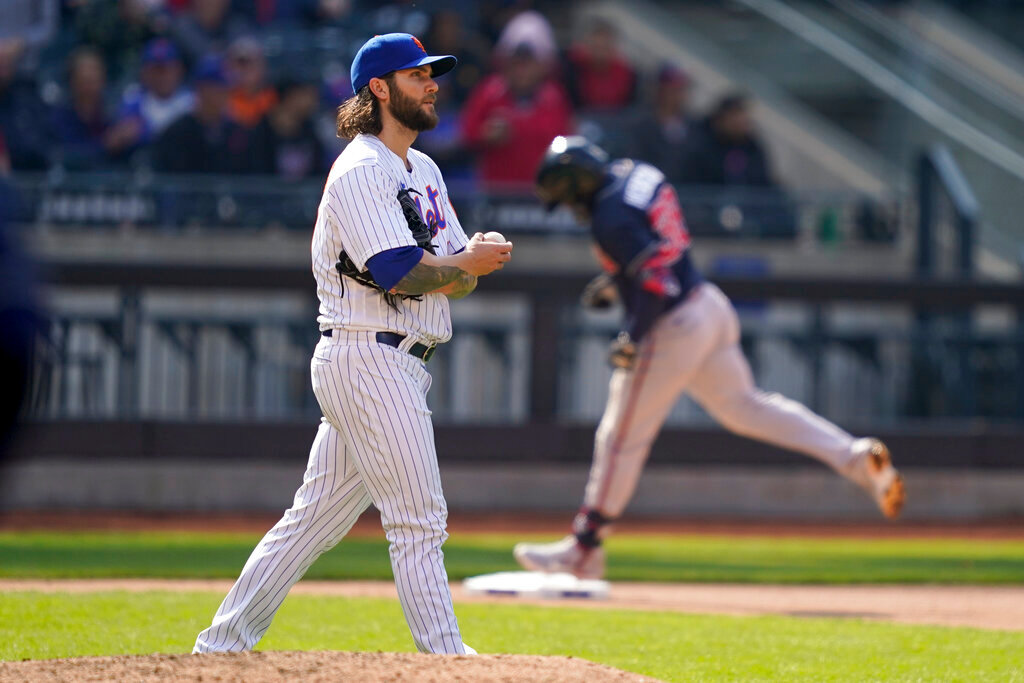 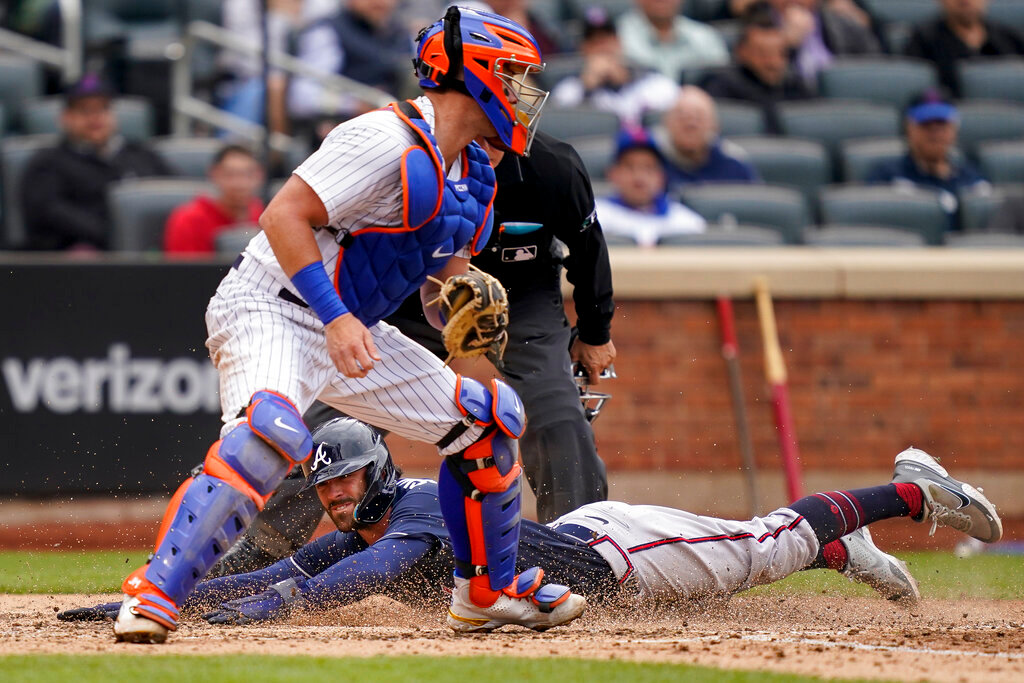 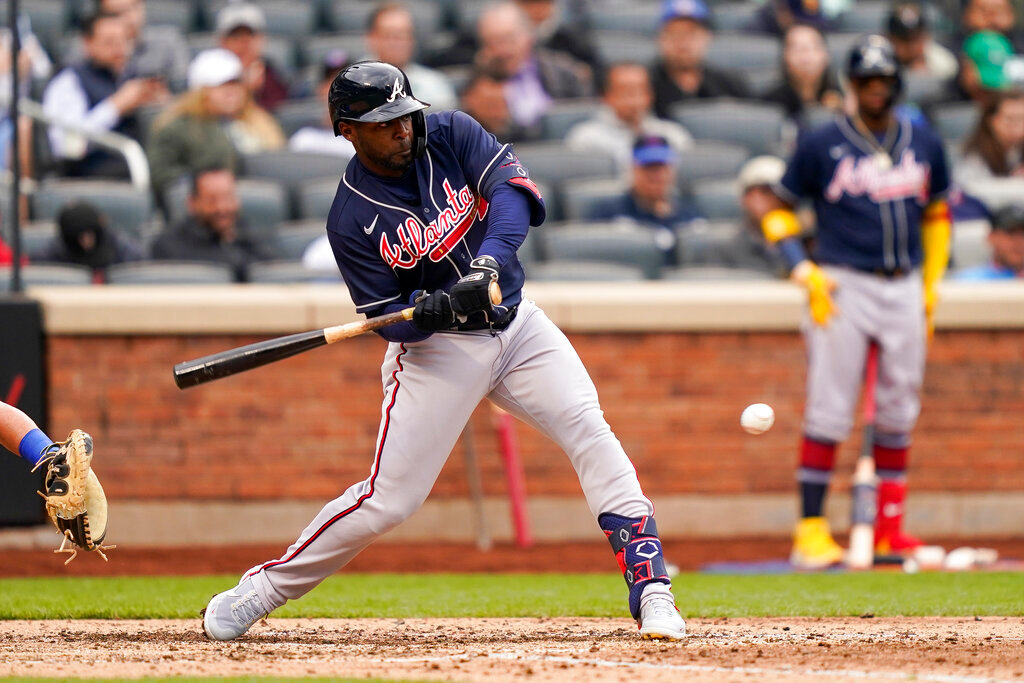 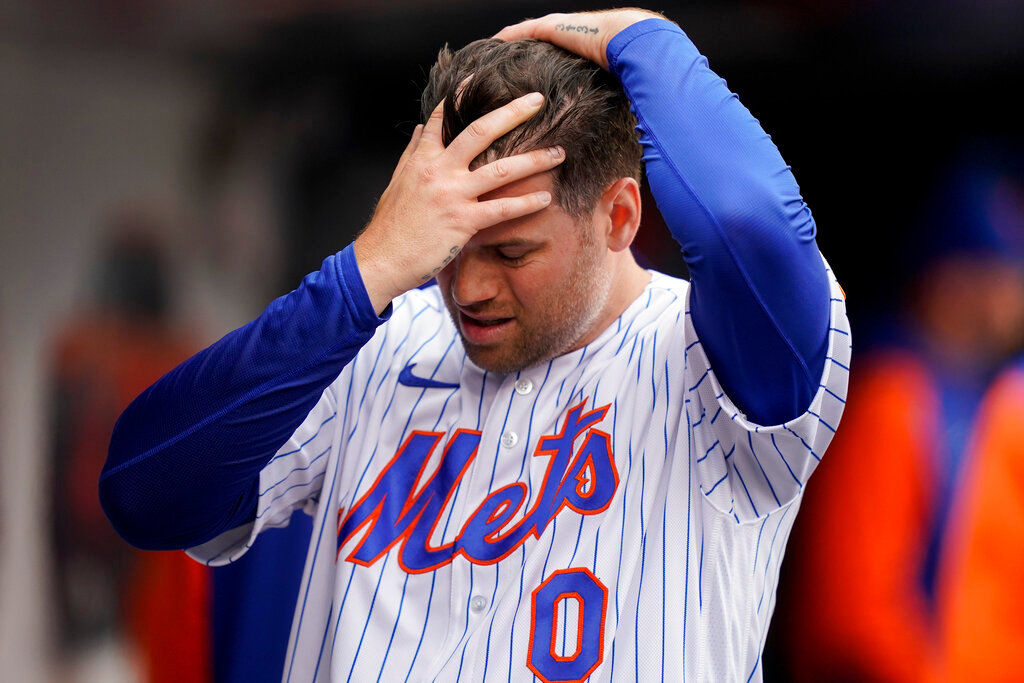 New York Mets relief pitcher Adam Ottavino (0) reacts in the dugout after being relieved in the sixth inning inning against the Atlanta Braves, Wednesday, May 4, 2022, in New York. Ottavino gave up five runs to the Braves. (AP Photo/John Minchillo)
Previous Next
Posted Thursday, May 5, 2022 10:26 am
By JERRY BEACH, Associated Press

Dansby Swanson and Ronald Acuña Jr. added RBI singles in Atlanta’s biggest inning of the season. Travis d’Arnaud walked with the bases loaded, and Matt Olson capped the outburst with a run-scoring groundout.

“That was nice to put together — keep the line moving a little bit,” Braves manager Brian Snitker said. “The one big inning — I don’t know that we’ve done that this year. That was good to see that we are capable of that.”

The Braves scored seven or more runs just three times in their first 26 games. The World Series champions began the day with a .212 batting average with runners in scoring position after they managed just four runs in a doubleheader sweep by the Mets on Tuesday.

“Hitting is contagious, it really is,” Duvall said.

Luis Guillorme homered in the ninth for New York, which had won three of four. Eduardo Escobar doubled home Pete Alonso in the sixth.

Mets right-hander Tylor Megill (4-1) was charged with three runs and four hits in 5 1/3 innings in his first start since he combined with four relievers on a no-hitter Friday night against Philadelphia.

Megill didn’t allow a hit against the Braves until Duvall singled in the fifth. Then everything fell apart for the Mets in the sixth.

“Their guy did a great job, he seems to be off to a great start this year,” winning pitcher Ian Anderson said of Megill. “For us to keep chipping away, draw a couple walks, get a couple base hits — usually we’re a team that hits a lot of homers and to score those runs with single, walk (and) moving guys over was good to see.”

Eight straight batters reached with one out. The rally began with an infield single by Austin Riley, who was initially called out on a grounder to third before the Braves challenged.

After Duvall’s double against Adam Ottavino made it 3-0, d’Arnaud raced home on a wild pitch. Guillermo Heredia scored when Acuña used some nifty baserunning to escape a rundown on Olson’s potential double-play grounder.

“Not much margin for error there,” Mets manager Buck Showalter said. “We could get out of that (down) one or two, we might have a shot, But we weren’t able to do it. A tough thing (is) it makes, statistically, Tylor’s outing look a lot different than it actually was.”

Heredia tacked on a two-run homer in the eighth on a drive to center against Trevor Williams.

Anderson improved to 3-2 with a 2.76 ERA in five career starts at the New York ballparks.

The nine consecutive no-hit innings for Megill is tied for the fifth-longest such streak in franchise history.

“Cool stat but just trying to pitch,” Megill said. “Don’t really kind of tend to think of those things when you’re out there pitching, just on what’s going on in front of you.”

With the four-game split, the Mets’ streak of series wins to start the season ended at seven — a team record and two shy of the 2018 Arizona Diamondbacks for the most consecutive series wins to open a season by an NL team in the last 45 years.