Alabama-Clemson matchup about more than championship

GLENDALE, AZ (BP) — For many, it could be difficult to imagine a College Football Playoff National Championship between two more quintessential Bible Belt teams than tonight's (Jan. 11) Alabama and Clemson matchup.

Exhibit 1 and Exhibit 1A for fan bases that love God and football, with that order sometimes up for debate.

Talk to those in the know, however, and one thing isn't debatable – both teams have a strong core of players and coaches who are faithful Christians and who have a higher priority in their lives than just winning a football game.

"Many of our coaches are very, very strong in their faith," said Ryan Goodroe, pastor of Utica Baptist Church in Seneca, SC, just a few miles from the Clemson campus. "They run their program in a way that makes that very obvious."

Goodroe isn't a Clemson insider, but he is an avid fan. He's met some of the Clemson coaches, including head coach Dabo Swinney. Brad Scott, who spent many years as a Clemson assistant coach before moving into athletic administration, is a member at Utica. Goodroe mentioned Jeff Scott, Brent Venables, Thad Turnipseed, and Tony Elliott as other coaches who are Christians.

Goodroe said that the word Clemson recruits use repeatedly in describing the Tigers' program is "family," and they are drawn to that family atmosphere that's different than a lot of other programs.

"I think the reason for that is that so many of our coaches are very Christlike and deeply committed to their relationship with Christ," Goodroe said. "They see their jobs as far more than just X's and O's, trying to win games."

At Alabama, meanwhile, Gary Cramer is the director of Fellowship of Christian Athletes on campus and has been closely involved with the football program for 11 years. He attends team practices, travels with the team, and is on the sidelines during games.

"Mostly where I spend my time is in one-on-one and small group Bible studies, both with coaches and with players" Cramer said. "I seek to equip some of the guys on the team to lead the studies."

About 15-20 players and coaches typically attend larger weekly Bible studies. One of the players Cramer has seen blossom in recent months is Michael Nysewander, a walk-on tight end who earned a scholarship this year.

"He's everything you would ever want to find in the perfect football player in his grit, his toughness, his commitment to practice, his humility." 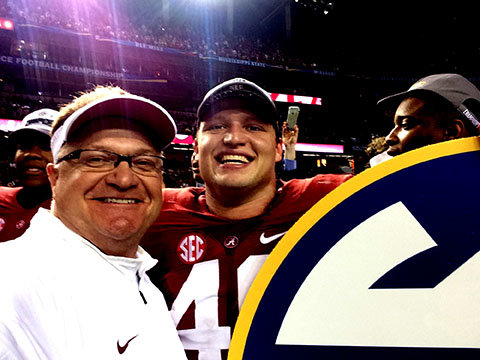 Gary Cramer, Fellowship of Christian Athletes director at the University of Alabama, stands next to Michael Nysewander, who he described as one of the Crimson Tide's spiritual leaders. Photo courtesy of Gary Cramer

But Cramer has witnessed more than just Nysewander's development on the field.

"Michael is one of those guys who has just grown tremendously in his faith, from being a young man who was very self-centered, very self-focused, to a young man who now seeks to live his life with God at the center," Cramer said. "Last week in Bible study, he shared how grateful he is for God's grace, that he is not the man he used to be, that God has transformed his thinking and who he is in Christ."

Linebackers Reggie Ragland and Denzel Devall are a couple of other Crimson Tide players who are spiritual leaders and who are "bold in their faith," Cramer said.

At Clemson, the spiritual leadership begins at the top, with Swinney. An outspoken Christian who attends NewSpring Church in Anderson, SC, Swinney has drawn the ire of groups such as the Freedom From Religion Foundation because of his overt references to his faith and his encouragement of team devotions and church attendance – even though Swinney does not mandate such behavior from his players.

"What you can't do is come into that program and act however you want to act just because you're good enough," Goodroe said. "He's sent plenty of players packing because they couldn't get the fact that it wasn't going to be about stars and production with him. If you didn't make the right choices, you're outta here. It doesn't matter who you are and what your play is like."

That's just another example that Goodroe sees of Swinney's true priorities. Yes, the coaching staff wants to win, and the coaches are obviously doing a fine job of teaching their players the game of football.

"But I think they get just as much pleasure and reward in seeing a young man develop into a man as they do in seeing him score a touchdown," Goodroe said. "They demonstrate that the way they run the program and the way they invest in these men's lives and the way they discipline them when it's necessary, even when it comes at great cost to the team. They're very consistent across the board in that regard."

For several years, the national champion took home the American Football Coaches Association National Championship Trophy – a football made of Waterford crystal. Though the trophy changed in 2014, Cramer still uses that imagery in his interactions with the Alabama players. The Christian players on the team have a saying: "The crystal trophy's not big enough."

"It's one of those things we strive after," Cramer said, "but the true prize is us maximizing our platform for the glory of God."