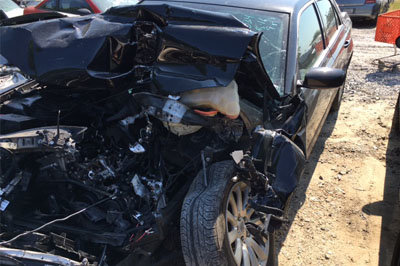 I almost bought the farm.

My route from home to the Georgia Baptist Mission and Ministry Center where I work takes me from Smyrna around the northern perimeter of I-285 to I-85 and northeast to Sugarloaf Parkway in Duluth. It is a 30-mile journey and more often than not I see a vehicle accident going to work in the morning and returning home in the afternoon. Occasionally, I see multiple accidents.

Sirens, emergency vehicles, police cars, fire trucks, first responders, gurneys, and HEROs are all commonplace in my commute to and from my workplace. 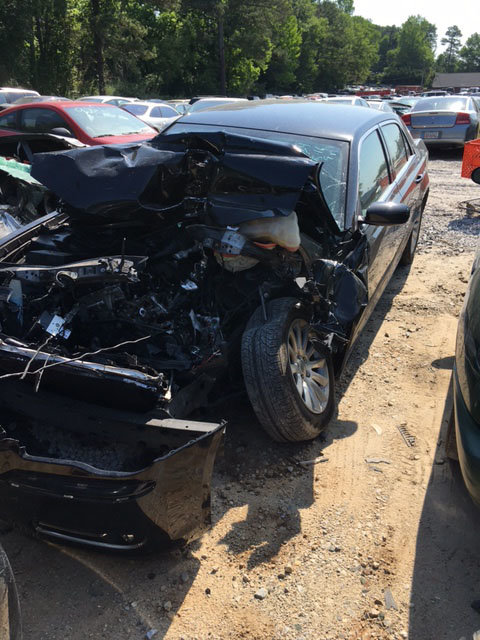 Index editor J. Gerald Harris survived the above accident last week when his car slammed into the back of a large delivery truck.

In the afternoon there is a digital sign over I-85 that often gives the numerical report of the number of highway deaths to date. According to projections by the Governor’s Office of Highway Safety there will be approximately 1,200 fatalities on the state’s highways this year. In a typical year the number of injuries on Georgia’s highways exceeds 110,000.

I was driving on I-85 and moving along at probably 55 miles an hour when I suddenly ran into the back of a large truck and totaled the automobile I was driving. I could try to justify the wreck, but I am sure the highway patrolman was correct when he cited me for driving too close to the vehicle in front of me.

As I remember, and it is all quite a blur at the present, I was behind a large truck when I decided to move into the far right lane and immediately realized that the truck in front of me was stopped dead still. I didn’t have time to brake and come to a complete stop. In fact, I must have been going 30 miles per hour when I hit the horizontal metal bar on the lower back of the truck. It was a frightening crash, as the photo at right indicates.

I am extremely grateful for many things. First, I am grateful for that metal bar. They are designed to keep cars from sliding underneath a truck during an accident and potentially decapitating the passengers. FOX News has reported that investigations reveal the bars are often not strong enough to keep drivers safe. The bar I hit did its job.

I am grateful for seatbelts. As a result of the accident I have bruises across my chest from my shoulder to my hip where the seatbelt held me in place and prevented me from serious injury.

I am also grateful for the airbags that were deployed. I don’t even remember when they were released, because it happened simultaneously with the crash, but I am confident that they spared me from serious injury. I have a bruised sternum and a lot of other hematomas, some of which were caused by the airbags, but no lacerations and no broken bones. I even had airbags around my feet and legs to protect my lower extremities. I had no idea there were so many airbags designed to protect the motorist at the time of an accident.

I am also grateful I had an automobile designed to absorb the shock of a serious impact. It appeared to me that upon impact the motor was designed to drop down so that it would not be forced back into the chassis. That, too, was a blessing.

I am also thankful for several motorists who were on the scene to check on me within seconds of the accident. I had the presence of mind to ask one of them if I could borrow their cell phone so I could call my wife to let her know I had been in a wreck, but that I was still in the land of the living. I had forgotten to take my phone with me that day.

I am also grateful for a loving wife who was on the scene before I was taken to the hospital. She followed the emergency vehicle to Grady Hospital and was with me until I was dismissed six hours later. I am also grateful for my daughter Miriam and son-in-law Billy as well as work colleagues Bobby Boswell, and Kevin and Ruth Smith, who came to the hospital emergency room to see me, for Dr. J. Robert White’s call and prayer, and so many others who have expressed concern and offered their prayers.

I am also grateful for the first responders, Grady Hospital, and the thorough and attentive care provided me while I was there. A six-hour visit to their trauma center reminded me that there are a lot of hurting people in this world. Hopefully, my experience will give me greater compassion for those in need.

Most of all, I am eternally grateful to our heavenly Father and His guardian angels who provided the ultimate protection and granted favor and blessings. “His eye is on the sparrow and I know He watches me.” How immeasurably good is our great God!

Those of us who are Georgia Baptist state missionaries travel a lot of miles. I suppose I have traveled nearly a half million miles since becoming the editor of The Christian Index. We all need to be careful on the highways of our state and nation.

Hopefully, writing down my experience will encourage you to take every precaution when you are driving your vehicle. One moment’s distraction could endanger your life or the life of someone else. Concentrate on the road and your surroundings. Texting, talking on the phone, or adjusting your radio dial, climate control system, rearview mirror, or seat could take your focus away from the task at hand.

Avoid driving when you are tired. Don’t drive when you are taking medications that make you drowsy. Use caution when changing lanes. Changing lanes too fast or not using your turn signals may cause accidents or upset other drivers. Be extra careful during deer season.

When on the road safety should be your major concern.