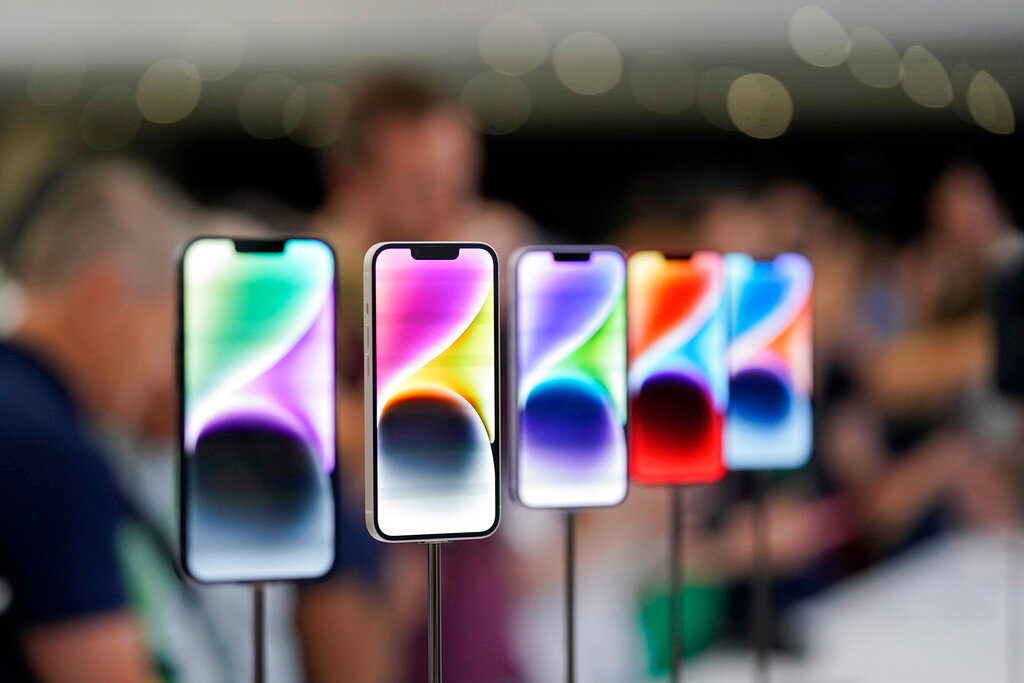 NEW DELHI (AP) — Apple Inc. will make its iPhone 14 in India, the company said on Monday, as manufacturers shift production from China amid geopolitical tensions and pandemic restrictions that have disrupted supply chains for many industries.

Apple unveiled its latest line-up of iPhones earlier this month. They will have improved cameras, faster processors and longer-lasting batteries at the same prices as last year’s models.

India is the world’s second-largest smartphone market after China but Apple iPhone sales have struggled to capture a large share of the market against cheaper smartphones from competitors.

The announcement from the Cupertino, California-based company dovetails with Prime Minister Narendra Modi’s push for local manufacturing, which has been a key goal for his government ever since he took office in 2014.

The tech company has bet big on India, where it first began manufacturing its iPhone SE in 2017 and has since continued to assemble a number of iPhone models there. Apple opened its online store for India two years ago, but the pandemic has delayed plans for a flagship store in India, according to local media reports.

The latest model will be shipped out by Foxconn, a major iPhone assembler, whose facilities are on the outskirts of Chennai, a city in southern India.

Apple is likely to shift about 5% of its iPhone 14 production to India from later this year, raising it to 25% by 2025, according to a JP Morgan report quoted by the Press Trust of India news agency.

The analysts expect nearly a quarter of all Apple products to be manufactured outside China by 2025, compared to about 5% now. Supply chain risks like the stringent COVID-19 lockdowns seen in China are likely the trigger for such relocation efforts that will continue over the next two or three years, the report said.

“Apple has been trying to diversify its supply chain for a while, but these efforts have grown in the last two years over trade sanctions between the U.S. and China,” said Sanyam Chaurasia, an analyst at Canalys.

Last year, the tech giant manufactured around 7 million iPhones in India. This news is likely to significantly increase India-made Apple smartphones, he added.

He said the plan to make more iPhones in India may also lead Apple to drop its prices for the Indian market, making it more competitive. “You can adopt a more aggressive pricing strategy if you manufacture locally,” Chaurasia said.

Most of Apple Inc.’s smartphones and tablets are assembled by contractors with factories in China, but the company started asking them in 2020 to look at the possibility of moving some production to Southeast Asia or other places after repeated shutdowns to fight COVID-19 disrupted its global flow of products.

Apple hasn’t released details, but news reports say the company planned to set up assembly of tablet computers and wireless earphones in Vietnam.

Other companies are keeping or expanding manufacturing in China to serve the domestic market while shifting export-oriented work to other countries due to rising wages and other costs, as well as the difficulty for foreign executives to visit China due to anti-COVID-19 travel restrictions.