Posted Wednesday, February 10, 2016 12:28 pm
Scott Barkley
The man walked into the church carrying a gun. Where the story goes from there is anyone's guess. The man could be part of a prayer meeting before murdering the very ones who took him in. The man could turn his gun over to the pastor before turning his life over to Jesus. With each instance the peace normally associated with sitting in church, singing, and listening to the preacher is fractured. Something that can help heal that is becoming common among churches of all sizes and locations – forming a security plan. 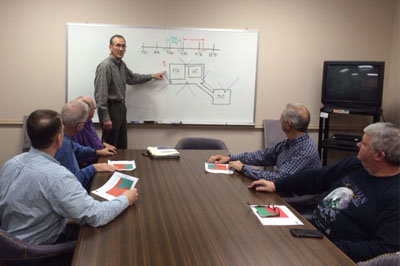 Robert Perdue leads a planning session for the security team recently formed at Tabernacle Baptist Church in Carrollton. Major points of focus for the team are observing the flow of foot traffic as well as monitoring access points to the building. TABERNACLE CARROLLTON/Special

Last September Steven Holmes, incoming deacon chairman at Tabernacle Baptist Church in Carrollton, was at an event with Carroll County Sheriff Terry Langley. The topic turned to church security and Langley asking if Tabernacle had a plan.

"When he heard we didn't have one he strongly encouraged us to do so," says Robert Perdue, a deacon who was ultimately put in charge of forming a security team. Perdue admits he had no experience for such a position. What he did have was a concern for the church's vulnerability.

In June 2013 the Department of Homeland Security released the Guide for Developing High-Quality Emergency Operations Plans for Houses of Worship. The document isn't meant to be regulative, but provide suggestions and a base from which churches can build an emergency operations plan (EOP). In addition to steps for forming a team, other areas covered include identifying all likely threats, including natural. Likelihood changes with a church's location, as a fire or tornado would be deemed more of a threat than an earthquake. An active shooter situation changes things, obviously, "Though the objective – protect congregants – remains the same, the threat of an active shooter is different," says the government guide before adding:

The better first responders and those working and visiting a house of worship are able to discern these threats and react swiftly, the more lives can be saved. This is particularly true in an active shooter situation, where law enforcement responds to a 911 call of shots fired. Many innocent lives are at risk in a concentrated area. Working with emergency management officials and community partners, houses of worship can develop a plan to better prepare their staff and congregants in prevention, reaction, and response to an active shooter incident.

Major John Latty of the Hall County Sheriff's Office has been helping churches develop security plans for years, beginning with his home church of Calvary Baptist Church in Gainesville. "When I talk to churches I use Scripture and remind them they're the guardians on the wall. To me, it's foolish to not have a security team in place today." Latty speaks from experience, as Calvary is situated near a homeless camp as well as a few miles from a correctional facility and public works camp for men about to be released from prison. The proximity has led to several encounters and opportunities to minister, but also situations where the safety of congregants had to take precedence.

Steps for forming a security team are offered in a 2013 guidelines document from the Department of Homeland Security.
"We're constantly having people walk by asking for money and a job," explains Latty, adding that members – including himself– have given food and money over the years. "One morning before service started a young man approached. Disheveled, in his 30s, wearing a heavy coat and carrying a backpack. He asked if he could go into the church and pray at the alter; he wanted to turn his life around." What happened next may seem heavy-handed and an example of lack of faith to some. Latty sees it as common sense and taking his responsibility as a protector seriously. "We said he could do that but had to leave the backpack and his coat outside. We also needed to pat him down for weapons. He was fine with that. So we did it and he went inside to pray at the alter. When he was finished he prayed, gathered his possessions, and went on his way." Before leaving, church members talked with the man and offered him a place to stay and even a car ride to where he needed to go, but he declined.

"There's been a tremendous increase in churches wanting to form security teams," says Latty, speaking of his position with the Sheriff's Office. A couple of years ago a few churches in his area experienced people coming in and being disruptive, using the sanctuary in the middle of the sermon to espouse their views, loudly, on the sermon itself or in another case address church members on why they shouldn't be sending their children to "government schools." Soon enough, their opinions became a rant that morphed into being profane. In all cases they were escorted from the church by the men. "The pastor of one of those churches contacted us and asked for training in such situations," Latty explains. "We set it up on a Sunday night for his church and other pastors in the area. We gave them ideas as simple as using ushers to greet people and get a feel for them as they talk to them to having armed men patrol the grounds during worship services." It's nothing new for men at Calvary to be carrying a firearm, Latty says. "People have done that for years, though it's not something we've advertised or talked about. Guns are concealed and are approved by the pastor and church elders. "We've never had to brandish a firearm," he adds. "People are instructed to never show one unless you absolutely have to use it. We've had to remove people due to being intoxicated or having mental illness; people in the congregation express their appreciation. "Hopefully, we'll never have to show a firearm. We'd rather just speak to somebody firmly and escort them, but I'd much rather be prepared."

In Carrolton, Langley visited Tabernacle Baptist the month after speaking with Holmes and met with the team, offering his initial assessment along with some immediate steps to make the grounds safer. "He said we needed to secure our perimeter first. Find where we were most vulnerable in a facility at our point of highest occupancy, then be able to observe and react to a threat before it becomes an intrusion," shares Perdue. A two-month-long check of foot traffic around the building revealed weak points where anyone could enter carrying who-knows-what without being seen. "We learned a lot from having cameras and personal observation," Perdue admits. The team discovered two doors, for instance, were not covered by cameras but allowed unobserved and unrestricted access to the building. "We fixed that the day after discovering it," he points out. Since then the number of doors accessible during worship time have been reduced to better keep an eye on things. The biggest obstacle to protecting the members have, at times, been the members themselves. "Overall, there's been no pushback," he says. "There was some talk of these new rules scaring away visitors, but they use the main entry doors." Any questions typically came from members who were used to having certain doors as shortcuts from one area of the church to another or because they were closer to a preferred parking spot. Perdue states the simple changes are steps any church could do. "What we've done isn't rocket science, just common sense."