The second team of Georgia Baptists are currently in PyeongChang and are scheduled to return this Saturday, Feb. 24. MARTY YOUNGBLOOD/Special

PYEONGCHANG, South Korea — With only a handful of days remaining for the 2018 Winter Olympic Games here, Georgia Baptists remain onsite with a second team sharing the gospel. 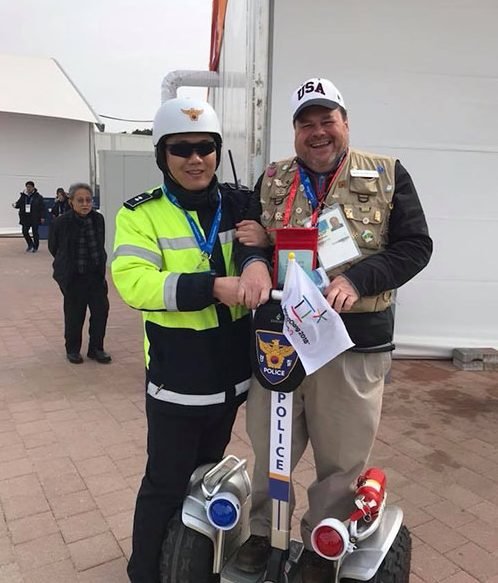 Mark Jones, pastor of First Greensboro, right, was able to leverage his police chaplain's credentials to strike up a witnessing encounter with a member of the Olympics security team ... and get his photo on a Segway. MARTY YOUNGBLOOD/Special

State missionary Marty Youngblood, who led the first team with Sid Hopkins from Gwinnett County, returned home on Feb. 16 after nearly two weeks of ministry. He and Hopkins, known as the “Pin Man” for his many repeat trips to the Games, trained local pastors and believers from a variety of faiths. They also worked with three retired International Mission Board missionaries who had served in the nation and with a team of collegians from the South Korean Baptist Student Union.

While in years past Youngblood and Hopkins would have worked with volunteers from Georgia Baptist churches, this year they went as resource personnel to train locals on how to minister in such a massive event.

The second team arrived on Feb. 16 and will return this Saturday, the 24th. The closing ceremonies will be held the following day when the torch is passed off to the next location, which will be Tokyo in 2020. The Games are in a rotation among Asian nations, showcasing themselves as growing powerhouses on the global stage. After Tokyo the Games will return to Beijing in 2022, then on to Paris in 2024 and Los Angeles in 2028.

Much has changed in a dozen years of Olympics ministry

Youngblood says a lot has changed in the dozen Olympics he has attended since his first Games. That takes him back 34 years as a California Baptist Student Union summer missionary in Los Angeles in 1984. 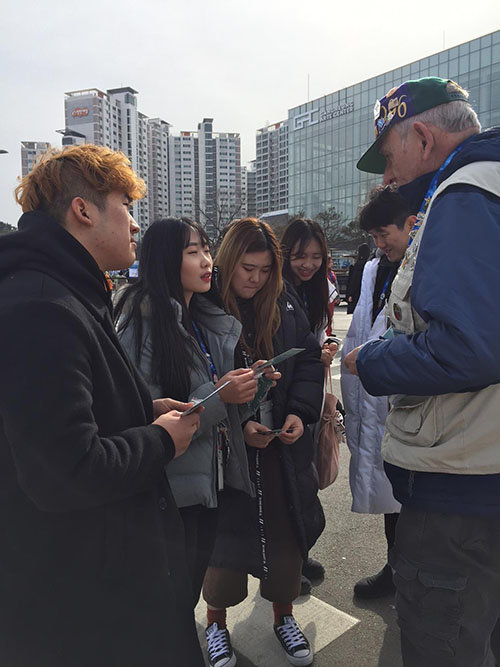 Director of Missions Tom Hocutt shares the witnessing pamphlet produced by the Georgia Baptist Mission Board in the Olympic Park. MARTY YOUNGBLOOD/Special

Up until 9/11 all of the Olympic Park venues – the massive hi-tech corporate exhibits, the Olympic Super Store, and the growing interactive experiences – were free and open to the public. But security concerns soon put an end to that openness and they now require admission for crowd control.

There are now two admission prices; one to the sports venues which includes the Olympic Park, and a second more affordable admission to just the Park which is popular with families.

The problem is that admission to the cheaper Park experience sells out early in the day, shortly after lunch. But that also provides a ministry opportunity, Youngblood explains.

“Because those tickets are so affordable, about $2 or so, we have learned that we can purchase 30 or 40 tickets each day and wait until they are no longer available. Then walk around and identify families who have traveled great distances only to find they cannot get inside the event.

“We ask them if we can give them a gift of admission and they are very excited. Some have ridden a train or bus for hours and are so excited to be able to see the exhibits with their children.”

Youngblood explains the joy on their faces when families are given free tickets. “That’s when we tell them that the tickets are just like Christ’s gift of eternal life for them, it is something they cannot purchase. If they are open we continue to share our faith, but if not we thank them for their time and wish them a wonderful experience,” he explains. 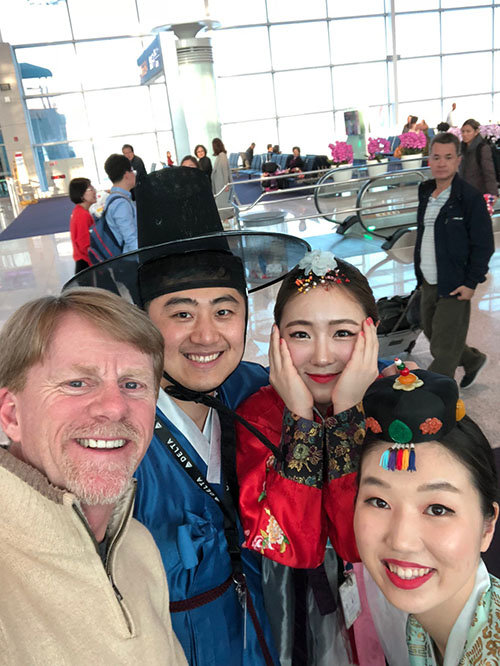 For Marty Youngblood, his faith sharing began shortly after stepping off the 14-hour Delta flight from Atlanta and his arrival in Seoul. MARTY YOUNGBLOOD/Special

Youngblood has come to appreciate the difference that comes with the new security guidelines.

Outside the Park the atmosphere is a real free-for-all with street preachers and folks from every faith and sects vying for attention. It can become rather unnerving to be repeatedly accosted by strangers when you do not know their intentions, he notes.

But once inside the Park people are more polite and have their guards down. They feel safe and secure and don’t mind engaging in conversation because of the  upbeat atmosphere. The same atmosphere can be found with those with more expensive tickets to the games; any political tension that may hang in the air melts away in short order.

“Even though there was tension between the two Koreas at these games, as soon as someone tossed that hockey puck on the ice it became ‘game time’ and all cares evaporated.”

As a result, Youngblood says those inside the secure areas are far more responsive to the gospel.

To make those presentations as effective as possible, the Georgia Baptist Mission Board provided 2,000 custom-made pins to be traded to initiate a witness opportunity as well as about 4,000 gospel presentation cards in English and Korean.

“We shared the gospel thousands of times and had many professions of faith. Those professions were recorded on cards and are now being used by the local believers for follow-up.

“The Olympics are such an unusual witnessing opportunity with so many people converging on one location for two weeks. We are praying that our work will make a difference for eternity,” he added.