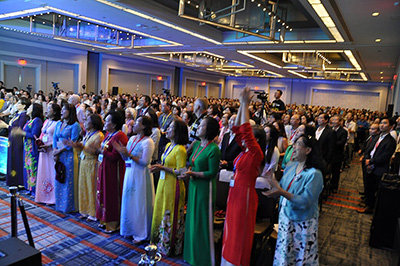 Mandrell ready for LifeWay to 'make an impact'

"I believe wholeheartedly in what we do and I will give you all of my heart," new LifeWay Christian Resources President and CEO Ben Mandrell told employees during his first LifeWay chapel July 17. Mandrell was unanimously elected as the organization's 10th president by LifeWay trustees June 28.AMANDA MAE STEELE/LifeWay

To help employees live out this goal in their personal lives, Mandrell provided each employee an "impact card" and instructed them to list three unchurched people they can attempt to influence for Christ over the next year.

Mandrell shared a personal experience that led to his family's call to become church planters and three lessons church planning taught him that he believes will carry over to LifeWay: living on mission is central to Christians' lives, ministry is supposed to be hard, and God can do great things when His people take great risks.

"Ministry is a team sport, and Lynley and I are jumping all in [at LifeWay]," he said. He ended his first chapel by praying with employees for God's wisdom as LifeWay enters a new and exciting season of ministry.

ATLANTA (BP) – The Vietnamese Baptist Union of North America celebrated their largest-ever annual meeting – 1,500 attendees – when they gathered for four days in Atlanta.

The union's president, Chien Thang Uc, said the new name reflects a desire to be more than just a yearly meeting focused on fellowship.

The meeting's theme, "Serve Like Jesus," was drawn from Mark 10:45. Johnny Hunt, the North American Mission Board's senior vice president of evangelism and leadership development, was among the featured speakers during the July 4-7 gathering at the Hilton Atlanta Airport Hotel.

During the meeting's business sessions, the union also voted to update the language in its constitution and elect officers.

More than 160 churches are affiliated with the Vietnamese Baptist Union throughout North America. Uc said Texas (particularly in the Dallas area), Georgia and North Carolina have the most churches in the union.

Next year's Vietnamese Baptist Union of North America meeting will be in Washington D.C., July 2-5. Registration will open at the beginning of 2020 at daihoibaptit.org.

JONESBORO, Ga. (BP) – As Cambodian Southern Baptists gathered to fellowship, worship together, and learn from one another, they focused on the theme of reconciliation during their June 26-29 meeting at Poston Road Baptist Church in Jonesboro, Georgia.

A renewed spirit of unity emerged in the Cambodian Southern Baptist Fellowship during its meeting in Georgia. BAPTIST PRESS

Caleb Soch, who serves as the director of the next generation for the fellowship, said the message of reconciliation at the fellowship's meeting was important for first- and second-generation participants.

As part of the fellowship, attendees participated in a variety of workshops to strengthen churches and help participants grow. For example, Yiv taught a workshop on memorizing the Bible.

The Cambodian Southern Baptist Fellowship, now encompassing 35 to 40 churches, began in 1985. Many of the first Cambodian churches in Southern Baptist life started in the 1980s as Cambodians moved to North America after the Khmer Rouge regime was overthrown in 1979 after having killed more than 2 million people since 1975.

Read more about their meeting here.

Henard, who will begin serving the Tennessee church Aug. 1, wrote he had missed "transformational preaching and pastoral ministry. I missed the fellowship of the local church. While I enjoyed and saw fruit from my work at the WVCSB, the Holy Spirit was tugging me in a different direction..."

Before serving as WVCSB executive director, Henard was senior pastor of Porter Memorial Baptist Church in Lexington, Kentucky, and a professor of evangelism and church growth at Southern Baptist Theological Seminary.

He has served as a first vice president of the Southern Baptist Convention; a trustee with Lifeway Christian Resources, including two years as chairman; and president of the Kentucky Baptist Convention. He is the author of several books, including his most recent, "ReClaimed Church: How Churches Grow, Decline, and Experience Revitalization" with B&H Publishing Group.

The administrative committee of the Executive Board will appoint an interim executive as well as a 15-person search committee with every association represented. The convention will provide more information about the position and nationwide search in the coming weeks.

BOLIVAR, Mo. (BP) – Southwest Baptist University's (SBU) Statement of Faith has not been implemented effectively across the fabric of the university, according to an external peer assessment committee that completed its work there in June.

The committee, which was commissioned by SBU late last year, was led by David Dockery, chancellor of Trinity International University. In particular, the committee evaluated the key elements of Baptist distinctiveness that inform SBU's identity as a Missouri Baptist institution. See related Baptist Press report.

According to an SBU press release, the committee also reported that, due to the lack of a clearly implemented Statement of Faith, the doctrinal position of SBU has been perceived as ambiguous.

The committee completed its review and "responded appropriately to the SBU administration" in late June, Dockery told The Pathway in a June 26th email.

The Executive Committee of the Board of Trustees will publicly release an executive summary of the review after it has been shared internally. With many employees not on campus during the summer, it will take a few weeks to accomplish internal communication.

SBU President Eric Turner also praised the work of the committee and is committed to lead the efforts needed to ensure the spiritual vitality of SBU.