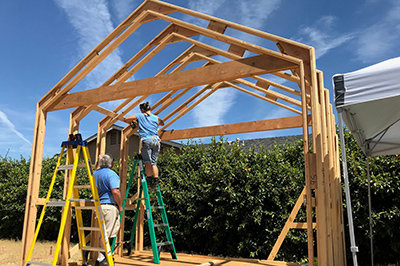 NASHVILLE (BP) — Contributions to Southern Baptist national and international missions and ministries received by the SBC Executive Committee in July were 1.45% above the projected budget through 10 months of the current fiscal year and 0.54% below the amount received during the same period last year, according to a news release from SBC Executive Committee President and CEO Ronnie Floyd.

Year-to-date designated giving of $181,079,285.84 was 1.61%, or $2,969,511.14, below gifts of $184,048,796.98 received in the first 10 months of last year's fiscal year. Designated contributions include the Lottie Moon Christmas Offering for International Missions, the Annie Armstrong Easter Offering for North American Missions, Southern Baptist Global Hunger Relief, Disaster Relief, and other special gifts. This total includes only those gifts received and distributed by the Executive Committee and does not reflect designated gifts contributed directly to SBC entities.

CP allocation budget gifts received by the Executive Committee are reported monthly to the executives of the entities of the convention, to the state convention offices, to the state Baptist papers and are posted online at http://www.sbc.net/cp/budgetreports.asp.

OKLAHOMA CITY (BP) — Broadus and Margaret Hale, emeritus International Mission Board missionaries in Canada, Brazil, and Zimbabwe over the course of 29 years, died May 31 and July 4, respectively, in Oklahoma City. He was 91; she was 84.

They met at Highland Baptist Church in Albuquerque and were married there nearly 63 years ago.

A memorial service for the Hales was held July 19 at Eastern Hills Baptist Church in Albuquerque.

The Hales are survived by two daughters, Sally and Beth, and five grandchildren.

Memorial donations may be made to the Lottie Moon Offering, IMB, 3806 Monument Ave., Richmond, VA 23230, or online at www.imb.org/give.

Todd Gray, Kentucky Baptist Convention's new executive director-treasurer, presents his vision for reaching Kentucky and the world for Christ at a special-called meeting of the KBC Mission Board on July 25 in Louisville. ROBIN CORNETET/KENTUCKY TODAY

Gray, a Kentucky native, was confirmed by the Mission Board of the Kentucky Baptist Convention to the position in a special called meeting on July 25 in Louisville.

A 14-member search team had been working to fill the post since November 2018. Gray becomes the 29th person to lead the 2,400 Kentucky Baptist churches.

Gray, 54, served churches in Kentucky and Indiana for 20 years before joining the KBC staff in 2012 as a regional consultant for western Kentucky. Since 2016 he's served as the team leader for the Evangelism, Church Planting and Campus Ministry team.

He highlighted a desire for the KBC to be the top service provider for Kentucky Baptist churches, for the convention to continue growing as a diverse, big tent convention, to increase partnership together through cooperation, and to reach Kentucky and the world for Christ.

On a vacant lot at Slade's senior pastorate Meridian Baptist Church in El Cajon, Calif., a tiny cabin is being built as an emergency, secure shelter for homeless women and children.

"All that we were doing before was growing tumbleweeds," Slade told BP Aug. 7, regarding the land. "Where now, if we're able to build this little village of emergency sleeping cabins, we're able to minister to people. We're able to come alongside of them and really ... meet them at their point of need and share Christ with them, and love on them, bring them back into safety and ... give them dignity."

The church that draws just under 100 to Sunday morning worship is not funding the project, but has partnered with Amikas, a nonprofit advocacy group for homeless women with children, with a focus on veterans.

Amikas raised the $4,000 needed to construct the cabin, a wooden, mobile unit which has no electricity or running water, but offers 96 square feet of living space behind a locked door.

Currently, Slade only has permission from city government to erect on the lot one cabin as an unoccupied showcase, but eventually hopes to secure permission to use it as an emergency shelter for the homeless and perhaps house additional units. As designed, those sheltered there would have access to church utilities.

MacDonald currently serves as strategic communication catalyst for the Florida Baptist Convention in Jacksonville, Florida, and executive director of the Center for Church Communication, based in Los Angeles, California. He has led BeKnownForSomething.com, a national consulting agency that helps churches and people become relevant in their community so they can share the Gospel effectively, and he is the author of "Be Known For Something." His work will shift to the IMB role based in the Richmond, Virginia, home office in late September.

A Canadian citizen, he is qualified for United States citizenship in 2020. He and Tammy, his wife of nearly 30 years, are members of Chets Creek Church in Jacksonville, Florida. They have two grown sons who live in Calgary and Chicago.