Bases housing US troops in Iraq, Syria come under attack 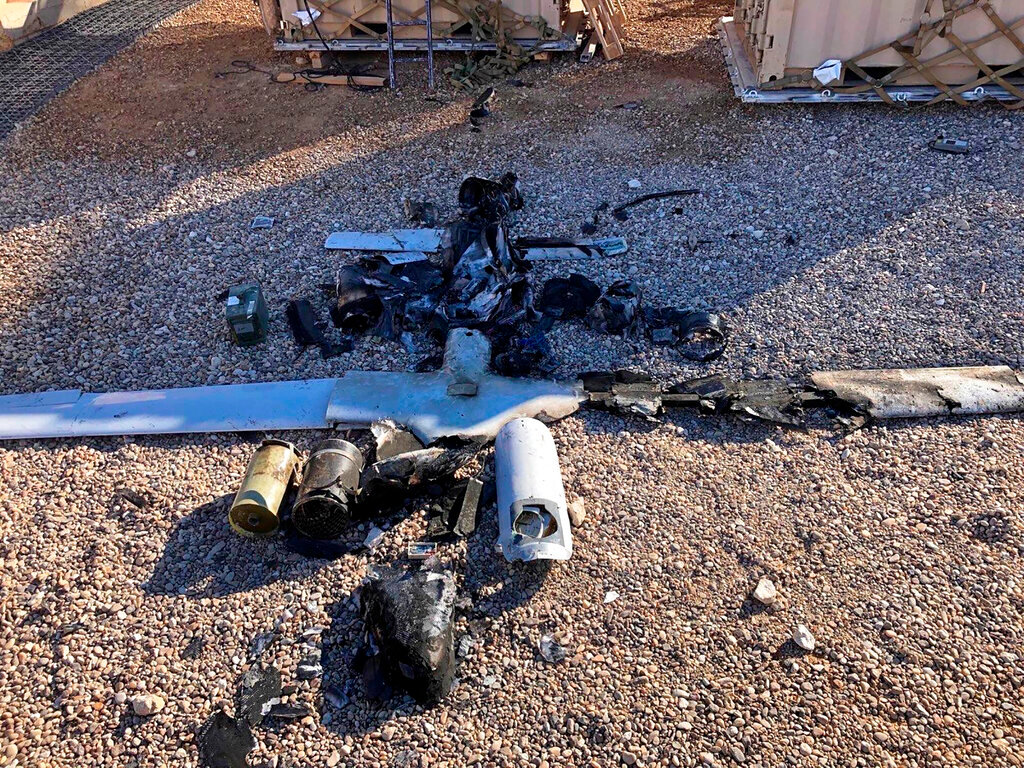 Parts of the wreckage of a drone lie on the ground near the Ain al-Asad airbase in the western Anbar province, Iraq, Tuesday, Jan. 4, 2022. Two explosives-laden drones targeting the base housing U.S. troops were engaged and destroyed by defensive capabilities at the base on Tuesday, a coalition official said. (International Coalition via AP)
Posted Wednesday, January 5, 2022 12:36 pm
By QASSIM ABDUL-ZAHRA, Associated Press

BAGHDAD (AP) — Iraqi military bases hosting U.S. troops in Iraq's western Anbar province and the capital of Baghdad were hit by Katyusha rockets Wednesday while in Syria, eight rounds of indirect fire landed inside a base with members of the U.S.-led coalition, the Iraqi and U.S. militaries said.

No casualties were reported in the three attacks, part of a series that began on Monday, the anniversary of a U.S. airstrike that killed top Iranian general Qassim Soleimani in Baghdad two years ago.

According to an Iraqi officer, an Iraqi base housing U.S. troops in the western Anbar province was hit with five Katyusha rockets on Wednesday evening; three other rockets fell outside the base's parameter. The officer, who spoke on condition of anonymity in line with regulations, said U.S.-led coalition forces at the base were forced into shelters by the barrage.

There was no immediate comment from the coalition, which is in Iraq to help fight the Islamic State group. No one claimed responsibility for the attacks, but they were believed to be launched by Iran-backed militias.

Earlier Wednesday, the Iraqi military said a rocket launcher with one rocket was located in a residential district in western Baghdad, an area used in the past by Iran-backed militias to fire at the airport.

In eastern Syria, meanwhile, the rounds hit a base run by the U.S.-backed Syrian Democratic Forces with a small coalition advisory presence. The coalition said in a statement there was minor damage.

Coalition forces, acting on intelligence, responded by firing six rounds of artillery towards the point of origin of the attack just outside the eastern town of Mayadeen, a stronghold of Iran-backed fighters, the statement said.

The statement said “Iran-supported malign actors fired ... from within civilian infrastructure with no regard for civilian safety.” It said that hours earlier, U.S.-led coalition forces had observed several launch sites near the base known as Green Village. Coalition forces conducted several strikes to eliminate the threats, it added.

“The Coalition reserves the right to defend itself and partner forces against any threat, and will continue to do everything within its power to protect those forces,” said Maj. Gen. John W. Brennan, Jr., commander of the joint task force.

On Monday, two armed drones were shot down as they headed toward a facility housing U.S. advisors at Baghdad airport. Two explosives-laden drones targeting an Iraqi military base housing U.S. troops in western Anbar province were destroyed on Tuesday.

The 2020 U.S. drone strike at Baghdad’s airport killed Soleimani, who was the head of Iran’s elite Quds Force, and Abu Mahdi al-Muhandis, deputy commander of Iran-backed militias in Iraq known as the Popular Mobilization Forces.

Pro-Iran Shiite factions in Iraq have vowed revenge for the killing and have conditioned the end of attacks against the U.S. presence in Iraq on the full exit of American troops from the country.

The top U.S. commander for the Middle East Marine Gen. Frank McKenzie warned in an interview with The Associated Press last month that he expects increasing attacks on U.S. and Iraqi personnel by Iranian-backed militias determined to get American forces out.

77 years after Auschwitz, Jews honor those who rescued them

Analysis: Crisis in Ukraine a showdown of two world views