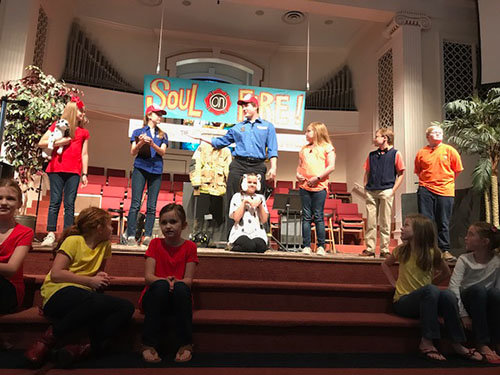 ATHENS — America’s firefighters are to be admired and appreciated. They place themselves in harm’s way repeatedly to serve and save lives.

Here are some statements/mottoes that have been seen in fire stations around the country:

“No mission too difficult, no sacrifice too great – duty first.”

“This is where ego ends – and service begins.”

“Failure is not an option.”

“What you do today is important, because you are exchanging a day of your life for it.”

“These things we do that others may live.”

In order to express appreciation to the firefighters in Athens, Matt Bartlett, children and family Pastor at Beech Haven Baptist Church, and his children’s choir hosted the firefighters from Stations 2 and 4, the two stations nearest the church, for a meal and a musical on the church campus on Wednesday, May 9.

Bartlett explained, “The firefighters came for our supper before our (WOW) worship on Wednesdays. They were treated to a complimentary meal and dessert. At the supper they were recognized and shown appreciation for their service to the city. During the worship service that followed, they were recognized again and the congregation gave them a thunderous applause to show our appreciation. 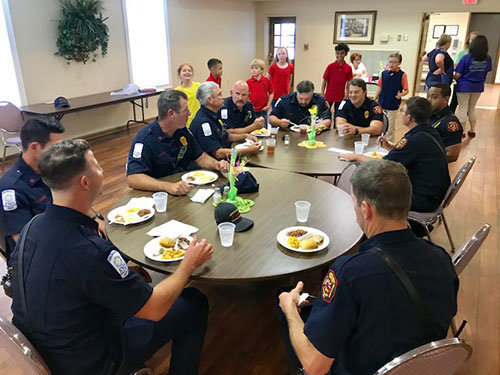 “They were on call and the congregation was informed that they might have to make a speedy exit, but thankfully, it was a quiet evening and they were able to stay until the program had ended.”

“Twelve on-duty firefighters, including Chief Mike Ash, were on hand to benefit from the food and the program provided by the church. After the meal, the K-1 children’s choir sang three songs followed by the 2nd and 5th grade choir presenting the musical ‘Soul on Fire, Sharing Good News with the World.’"

Bartlett stated, “The stage was set up like a fire station where the chief and lieutenant trained the new recruits (the children’s choir), but this was a very different kind of fire station.

“The theme of the musical was not about fighting fires that can be seen with the eyes, but all about calling upon Jesus to ignite holy fires in the souls of individuals and sharing the Good News. The theme was Romans 12:11: ‘Not slothful in business; fervent in spirit; serving the Lord.’

“The musical was all about firefighting themes like the gear they wear (spiritual armor), combustion (heat, oxygen, and air = Father, Son and Holy Spirit), and igniting fires. It was neat to see how the physical related to the spiritual. 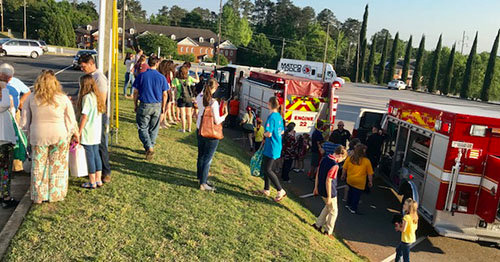 Beech Haven members look at the fire trucks after the service. BEECH HAVEN/Special

“After the musical, Lead Pastor David Mills clearly shared the Gospel with the congregation and guests and gave them a chance to respond.

After the program the firefighters invited the children and families to see the fire trucks and interact with the first responders who were present. There were two fire trucks and about five other service vehicles like EMS, etc. Bartlett exclaimed, “It was a great way to end the evening.

“The theme of the musical and play lent well to the attendance of the firefighters, but the everlasting impression it made on the children was significant. They are more likely to respect these real-life heroes and pray for them in the days to come.”