Being a man of multiple talents: the pastor’s job right now 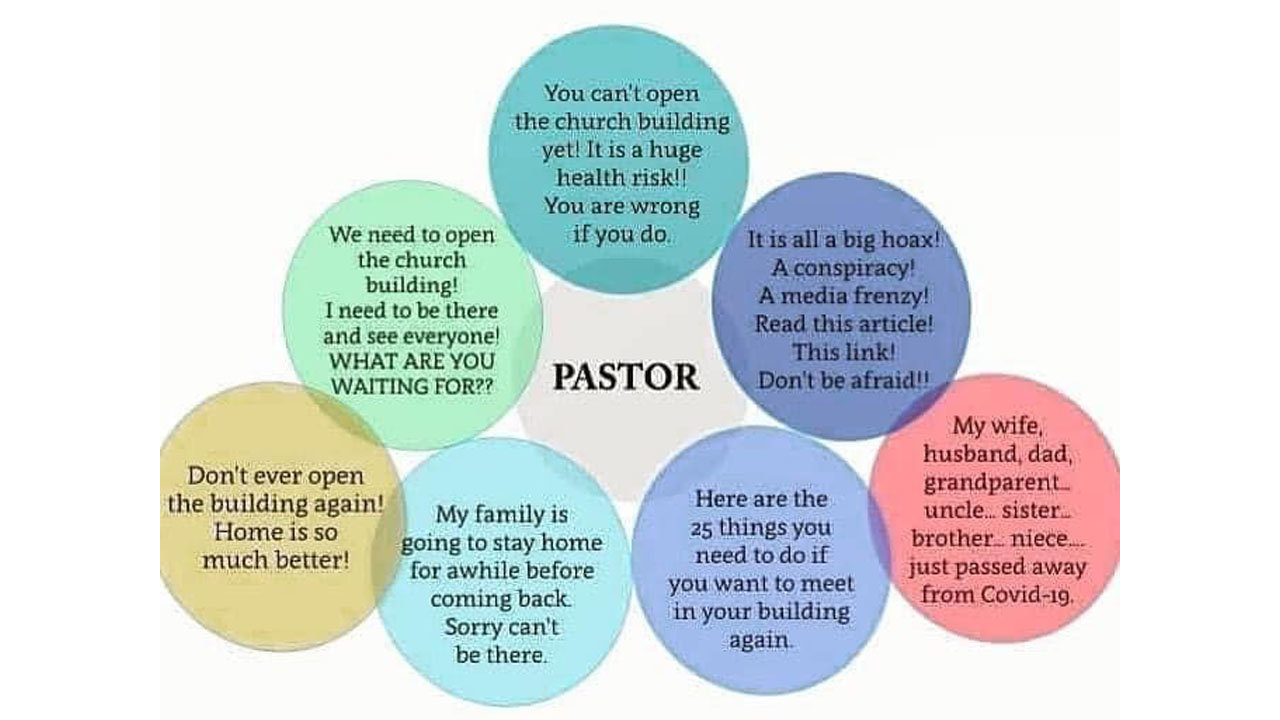 Over the weekend the above chart made its way across social media, shared by many pastors. If I knew the source of it, I’d gladly mention it here. But I don’t. That’s a shame, because I’d love to credit whoever made something that resonated so strongly.

Even prior to the coronavirus pandemic, a lot was expected of pastors. They needed to be preachers, of course, but also counselors, teachers, best friend to around 40 different people, and involved heavily in the community while putting God and their family first. Since mid-March add to that list technology and social media wizard, scientist, medical expert, and identifier of what is and isn’t fake news.

As churches begin meeting again in person, those requests made to do so safely have intensified. And from what I’ve seen, by and large those churches and pastors have answered the challenge. What’s most important, they’ve done so within the context of their own communities. This is key, because from what I’ve seen many of the suggested answers to dealing with COVID-19 have come by the broadest of brushes.

I talked to a few pastors recently specifically about the reopening process. They’re doing it differently according to their location. One is already meeting again. Another will do so June 7, yet another is waiting until June 14. They are in different counties and working within the guidelines by the CDC as well as local health officials. That includes social distancing and encouraging the wearing of masks without mandating that it be done so.

They’ve seen the criticisms of returning to in-person gatherings. But to a man they pointed out a part of church that is just as important to not neglect – community. No, preaching to a camera or screen isn’t a pastor’s first choice. But, it’s not about that.

They hear and share concerns over the spread of the coronavirus, sure, but they also hear stories of how loneliness wracks individuals. They see the impact of those carrying stress from joblessness alone when it’s normally shared through a Sunday School class.

As for the pastors themselves, leading their church has been like holding a boat together on a raging sea. They can see other boats out there in the distance fighting the same storm, but a sense of isolation remains. To do their ministry, they also need to be around each other. No one understands your path like someone else walking it.

And when it comes to opening churches back up, one criticism I’ve seen relates to money. Namely, the accusation is that churches need people back in the pews to bring their tithe. Several pastors have told me that’s not the case. In fact, the drop-off in giving hasn’t been as bad as initially feared and depends largely on whether a church had online giving in place prior to the coronavirus shutdown. One told me his church could keep meeting online for longer and be healthy financially, but the impact that would have on the community, socially speaking, is too big to ignore.

I ask you to look at that graphic again. Read each statement on the outside bubbles. Now look at the title in the middle. That’s the reality of what pastors are dealing with these days. They deserve patience and grace as they lead their churches to serve their communities.

Pray for them as they work with local health and medical personnel on how to safely bring people back into the church building. Lift them up in identifying reliable news sources for their decision-making process. Ask God to guide them in establishing those new ministry practices that use technology for building connections, but also work toward re-establishing the type of community we see modeled in Scripture.

Because if there’s one thing worse than churches opening up too soon, it’s if they open up too late.