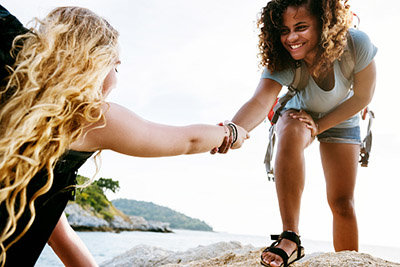 Social media has changed the concept of encouragement. For the most part, we are looking for ways to encourage ourselves. Cutting out ‘toxic’ people, finding the right ‘hang in there’ cat poster, or a daily Bible meme helps us to give ourselves a social media pep talk. We spend quite a lot of time encouraging ourselves and building up our public image.

When it comes to encouraging others, we take one of two paths. Most of the time, we are guilty of taking the broad path. Acting like Job’s friends we tell people to pick themselves up and stop being sad. Our encouragement comes with a mixture of individualism and self-assured wisdom. Deborah teaches us another way of leading others to obey.

Deborah the wife and mother

Deborah’s intro bio tells us that she is a prophetess and a wife. Whereas God’s military Judges like Ehud, Gideon, and Samson are leading Israel from the frontlines, Deborah is busy working from her home, applying God’s wisdom and judgement to those who come to her (“she used to sit under the palm of Deborah”). As a result, Barak (a military Judge) travels 75 miles to meet with her.

Some think of Deborah as a headstrong female who barks orders at men and they obey her, but this is not the right picture of her. Deborah’s uses rhetorical questions to remind Barak of the greatness of God. “Has not the Lord, the God of Israel, commanded you?” she asks. When Barak is hesitant again she asks him, “Does not the Lord go out before you?” Deborah encourages Barak by reminding him that his leadership is reliant upon God. Barak’s obedience on the frontlines is founded upon God’s call not man’s courage.

Despite her encouragement, Barak refuses to obey God directly. “I will go” he says, “but if you will not go with me, I will not go.” Conditional obedience is not obedience. As a result of Barak’s cowardice, the Lord takes away Barak’s victory and gives it to Jael, a Bedouin housewife. Barak was brought to shame before the Lord.

Deborah’s view of encouraging others

Barak’s shame provided a perfect opportunity for Deborah to self-promote. She could take the glory for herself, fly the flag of Deborah Megaministries, and remind everyone that men failed where women prevailed. She does no such thing. Instead Deborah exults the Lord, his work, and even Barak.

“Arise, Barak, lead away your captives,” she sings. Deborah mentions herself in the song, but not as a prophetess of renown, not as an amazing leader. Deborah describes herself as a mother of Israel whose “heart goes out to the commander of Israel.” She sees herself as someone singing the praises of others. “Awake, awake, Deborah! Awake, awake, break out in a song!”

We aren’t to think of Deborah’s ministry of encouragement as a blue-face-painted Mel Gibson-William Wallace type, giving impassioned speeches to the frontline before she charges into battle screaming, “Freedom!” To think of Deborah as a mighty military leader, a warrior of God, or an elite champion, would do a great disservice to her own understanding of encouragement. Deborah pictured herself as a wife and mother admonishing others to obey the Lord.

Living Out a Ministry of Encouragement

Deborah’s example provides us with the second path of encouragement. Deborah did not exalt herself. She did not berate Barak for his failures. Through gentle rhetorical questions, she reminded Barak that his fear could be overcome by the Lord’s strength. The subject of Deborah’s life was the Lord. She blessed others by recalling that God is the subject over everyone’s life.

As Christians in a society of self-promotion, self-exultation, and self-focus, we tend to think we need to cut ‘toxic’ people out of our lives so that we can be happy. We aren’t willing to put up with the weakness in others, especially if that weakness brings us down. We might try to sprinkle a little Christianity onto a struggling person and encourage them by reminding them not to keep failing, but we hardly take Deborah’s approach.

Encouraging others costs us our ego. We can’t be both humble encouragers and flashy heroes. Deborah reminds us that encouraging others is not a one-and-done ministry. The same people need the same encouragement week after week. When they fail, they need to be lifted up and not humiliated. A ministry of encouragement isn’t sold in a two-pack of ‘I-believe-you-can-do-it’ and ‘I-can’t-believe-you-failed-again.’ Encouragement finds the weakness in others and, with the heart of a mother for her child, bandages the wound (again and again) with the strength of the Lord.