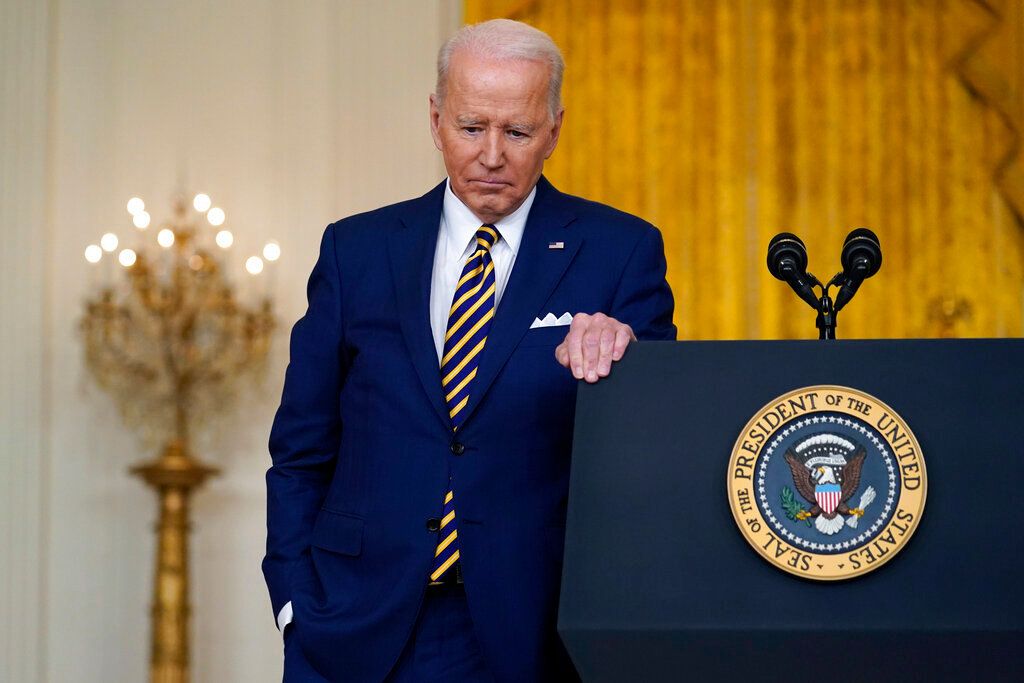 President Joe Biden listens to a question during a news conference in the East Room of the White House in Washington, Wednesday, Jan. 19, 2022. (AP Photo/Susan Walsh)
Susan Walsh
Posted Thursday, January 20, 2022 8:26 am
By AAMER MADHANI and HANNAH FINGERHUT

WASHINGTON (AP) — President Joe Biden ends his first year in the White House with a clear majority of Americans for the first time disapproving of his handling of the presidency in the face of an unrelenting pandemic and roaring inflation, according to a new poll from The Associated Press-NORC Center for Public Affairs Research.

More Americans disapprove than approve of how Biden is handling his job as president, 56% to 43%. As of now, just 28% of Americans say they want Biden to run for re-election in 2024, including only 48% of Democrats.

Asked on Wednesday at a wide-ranging news conference about his flagging popularity, Biden responded, “I don't believe the polls.”

It’s a stark reversal from early in Biden's presidency.

In July, 59% of Americans said they approved of Biden’s job performance in an AP-NORC poll. His approval rating dipped to 50% by late September in the aftermath of the chaotic and bloody U.S. military withdrawal from Afghanistan and amid surging coronavirus infections and the administration’s fitful efforts to push economic, infrastructure and tax policies through Congress.

The latest poll shows that Americans' confidence in Biden's handling of the pandemic — seen as a strength early in his administration — has further eroded as the omicron variant strains the health care system and further exhausts an American electorate that had hoped life would be back to a semblance of normalcy by now.

Americans are even more downbeat about his handling of the economy, with just 37% approving. Growing angst about his economic policies comes as inflation rose at its fastest pace in nearly 40 years last month, a 7% spike from a year earlier that is increasing household expenses and eating into wage gains.

The poll shows only about a quarter of Americans think the phrase “strong leader” describes Biden very well, while about that many say it’s a somewhat good description. Roughly half say he is not a strong leader. Views of Biden’s understanding of “the needs and problems of people like you” are similar.

The AP-NORC poll of 1,161 adults was conducted Jan. 13-18 using a sample drawn from NORC’s probability-based AmeriSpeak Panel, which is designed to be representative of the U.S. population. The margin of sampling error for all respondents is plus or minus 3.8 percentage points.

US births rose last year but still less than before pandemic