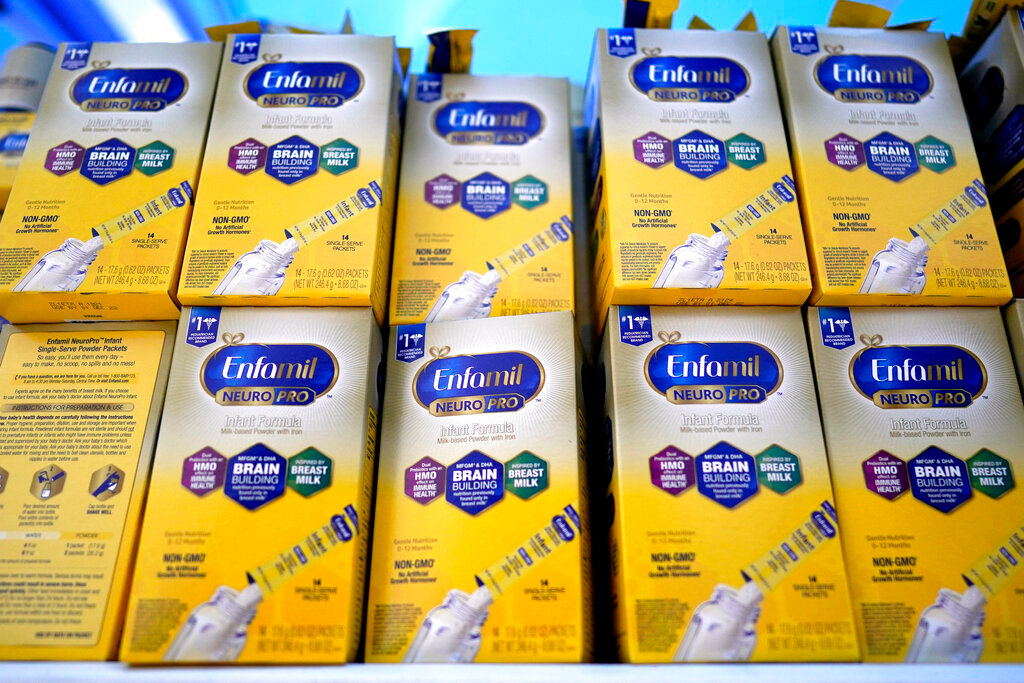 Infant formula is stacked on a table during a baby formula drive to help with the shortage May 14, 2022, in Houston. (AP Photo/David J. Phillip, File) 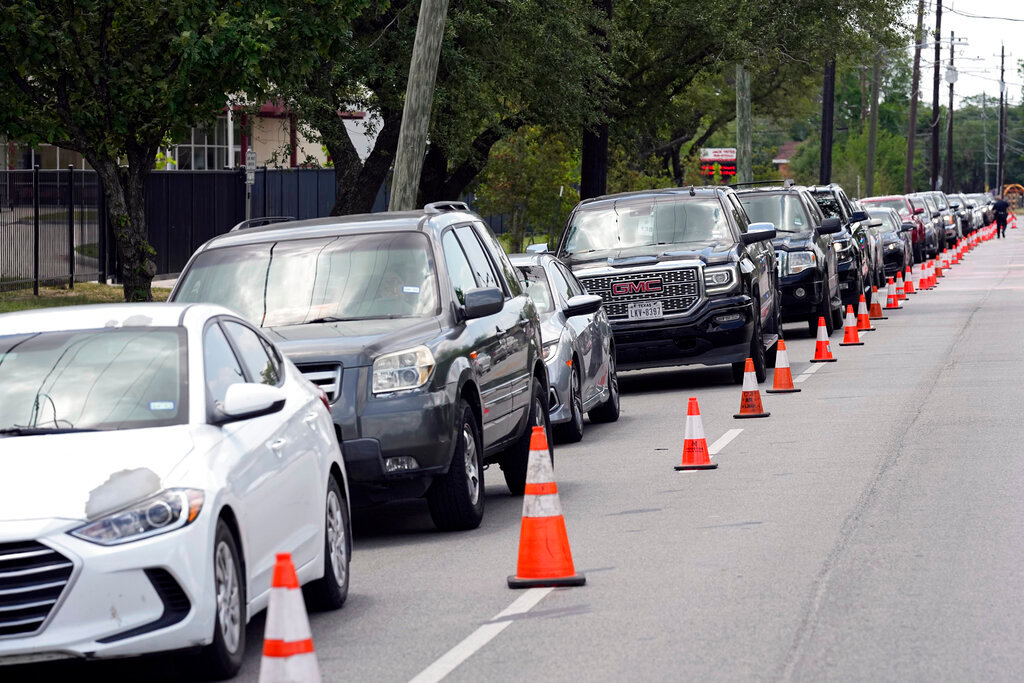 People wait in line during a baby formula drive to help with the baby formula shortage Saturday, May 14, 2022, in Houston. Parents seeking baby formula are running into bare supermarket and pharmacy shelves in part because of ongoing supply disruptions and a recent safety recall. (AP Photo/David J. Phillip) 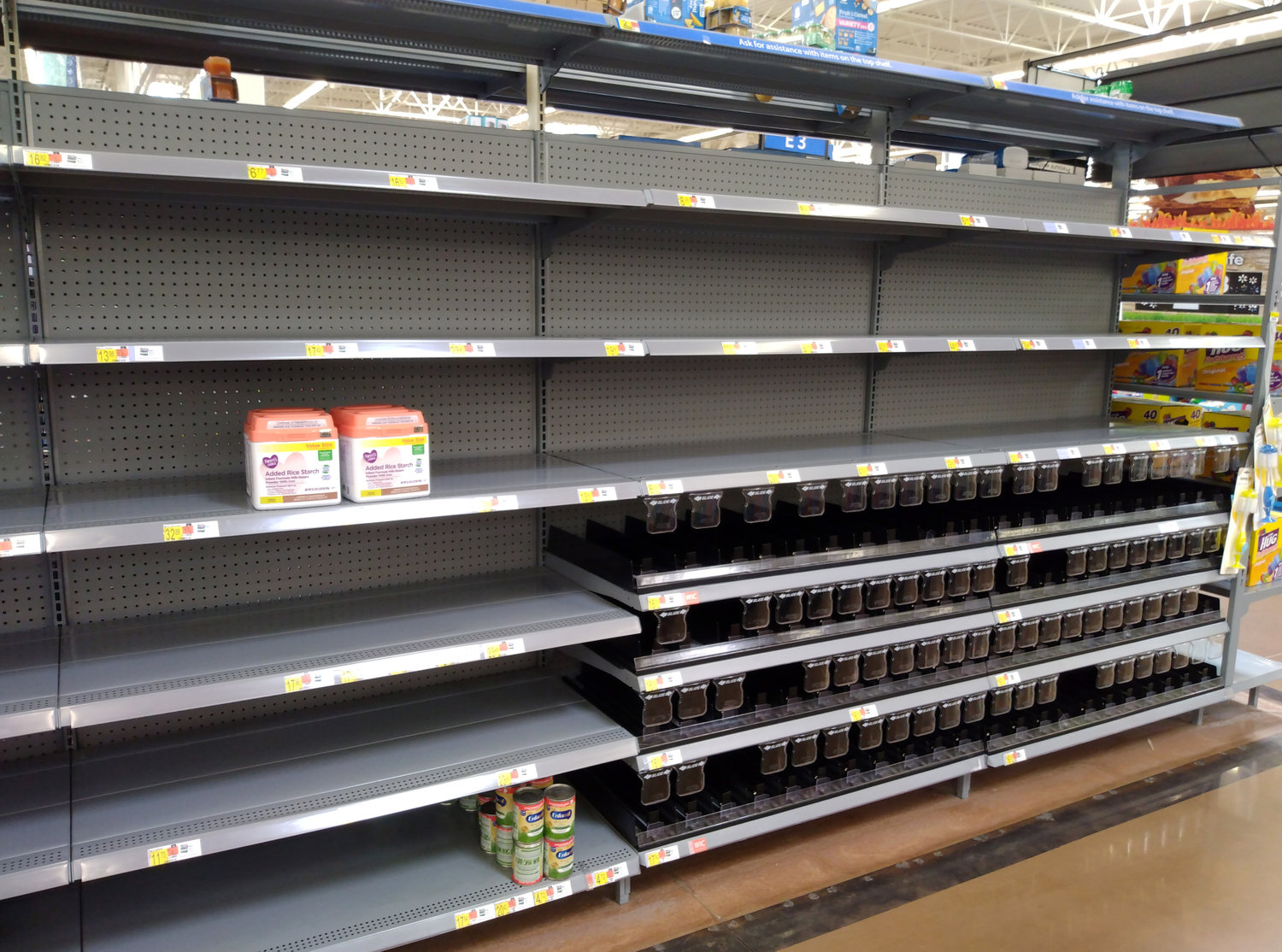 Shelves for baby formula site almost completely empty May 14, 2022, at a Walmart store in Dallas, Ga. Parents seeking baby formula are running into bare supermarket and pharmacy shelves in part because of ongoing supply disruptions and a recent safety recall. (Index/Henry Durand)
Previous Next
Posted Wednesday, May 18, 2022 10:18 pm
By ZEKE MILLER and KEVIN FREKING, Associated Press

WASHINGTON (AP) — President Joe Biden on Wednesday invoked the Defense Production Act to speed production of infant formula and authorized flights to import supply from overseas, as he faces mounting political pressure over a domestic shortage caused by the safety-related closure of the country's largest formula manufacturing plant.

The Defense Production Act order requires suppliers of formula manufacturers to fulfill orders from those companies before other customers, in an effort to eliminate production bottlenecks. Biden is also authorizing the Defense Department to use commercial aircraft to fly formula supplies that meet federal standards from overseas to the U.S., in what the White House is calling “Operation Fly Formula.”

Supplies of baby formula across the country have been severely curtailed in recent weeks after a February recall by Abbott Nutrition exacerbated ongoing supply chain disruptions among formula makers, leaving fewer options on store shelves and increasingly anxious parents struggling to find nutrition for their children.

The announcement comes two days after the Food and Drug Administration said it was streamlining its review process to make it easier for foreign manufacturers to begin shipping more formula into the U.S.

In a letter Wednesday to the Department of Health and Human Services and the Department of Agriculture, Biden directed the agencies to work with the Pentagon to identify overseas supply of formula that meets U.S. standards over the next week, so that chartered Defense Department flights can swiftly fly it to the U.S.

“Imports of baby formula will serve as a bridge to this ramped-up production,” Biden wrote.

Regulators said Monday that they’d reached a deal to allow Abbott Nutrition to restart its Sturgis, Michigan, plant, the nation's largest formula plant, which has been closed since February due to contamination issues. The company must overhaul its safety protocols and procedures before resuming production.

After getting the FDA’s OK, Abbott said it will take eight to ten weeks before new products begin arriving in stores. The company didn’t set a timeline to restart manufacturing.

The White House actions come as the Democratic-led House approved two bills Wednesday addressing the baby formula shortage as lawmakers look to show progress on what has become a frightening development for many families.

One bill with wide bipartisan support passed by a vote of 414-9. It would give the secretary of the Agriculture Department the ability to issue a narrow set of waivers in the event of a supply disruption. The goal is to give participants in an assistance program commonly known as WIC the ability to use vouchers to purchase formula from any producer rather than be limited to one brand that may be unavailable. The WIC program accounts for about half of infant formula sales in the U.S.

“I want to say to the mom struggling that we hear you in Congress and you do not need to handle this on your own. We are working to find you a solution," said the bill's sponsor, Rep. Jahana Hayes, D-Conn.

The other measure, a $28 million emergency spending bill to boost resources at the Food and Drug Administration, passed by a mostly party-line vote of 231-192, and it’s unclear whether the Senate will go along.

“This bill just continues the Democrats' strategy of throwing money at the same bureaucrats who caused the crisis and who have not made its solution a priority," said Rep. Andy Harris, R-Md.

Abbott’s voluntary recall was triggered by four illnesses reported in babies who had consumed powdered formula from its plant. All four infants were hospitalized with a rare type of bacterial infection and two died.

After a six-week inspection, FDA investigators published a list of problems in March, including lax safety and sanitary standards and a history of bacterial contamination in several parts of the plant. Under Monday’s agreement, Abbott must regularly consult with an outside safety expert to restart and maintain production.

Chicago-based Abbott has emphasized that its products have not been directly linked to the bacterial infections in children. Samples of the bacteria found at its plant did not match the strains collected from two babies by federal investigators.

But FDA officials pushed back on that reasoning Monday on a call with reporters — their first time publicly addressing the company’s argument. FDA staffers noted they were unable to collect bacterial strains from two of the four patients, limiting their chances of finding a match.

“Right from the get-go we were limited in our ability to determine with a causal link whether the product was linked to these four cases because we only had sequences on two,” FDA’s food director Susan Mayne said.

Fixing the violations uncovered at Abbott’s plant will take time, according to former FDA officials. Companies need to exhaustively clean the facility and equipment, retrain staff, repeatedly test and document there is no contamination.

As part of the FDA’s new import policy, regulators said companies would need to provide documentation of their factory’s inspections.