People paying their respects line the streets of Black Mountain, NC as the motorcade transporting the earthly body of Billy Graham makes its way to Charlotte. KATHY KMONICEK/AP

CHARLOTTE — Franklin Graham, Billy Graham’s son and current president of the Billy Graham Evangelistic Association and of Samaritan’s Purse, made a promise to his dad several years ago that when he died he would make sure that he was buried in his hometown of Charlotte.

On Saturday, Billy Graham’s body was transported in a motorcade from The Cove, his ministry’s training center in Asheville, to the Evangelist’s Library in Charlotte, NC. 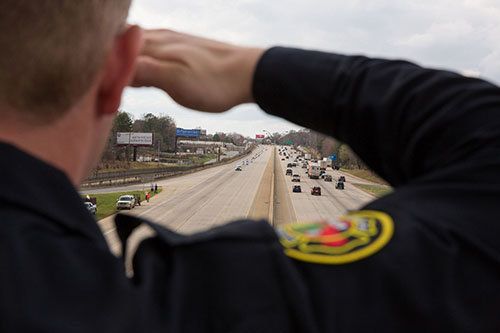 During the transportation of Billy Graham's casket from Asheville to Charlotte, Franklin Graham notes, “The outpouring of love we are seeing … is overwhelming …. We are so incredibly touched. My father would be humbled and honored. He would want all the glory to go to God. Thank you from the bottom of our hearts.” KATHY KMONICEK/AP[/caption]

All along the 125-mile route, the 10-car motorcade was met by thousands of admirers alongside the highway who waved Bibles, flags, and banners. Most took pictures of the procession as it motored down Highway 321 to Interstate 85 into the Queen City of Charlotte.

Charlotte was home for the famous preacher. In his autobiography Graham noted, “When I was a boy growing up, Park Road outside Charlotte, NC, was little more than a rutted dirt lane cutting across acres of farmland. Our white frame house with green trim sat back from the road and overlooked sprawling pastures dotted with our family’s dairy herd, set against the tranquil backdrop of trees and low hills.”

That is where the famed evangelist was born – Nov. 7, 1918 – four days before the armistice that ended World War I and one year to the day after the Bolshevik Revolution in Russia. 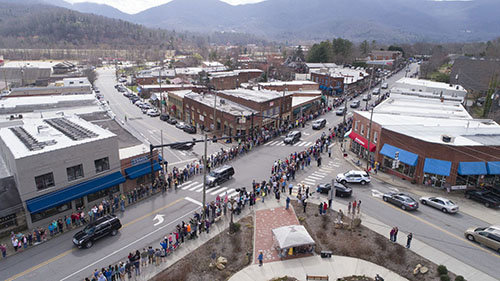 The transportation of Billy Graham's casket from Asheville to Charlotte went through the town of Black Mountain, near Ridgecrest Baptist Conference Center as well as Montreat, location of the Graham homestead. KATHY KMONICEK/AP

That was the beginning. All through his life Billy Graham lived circumspectly in this world, preached the Gospel with a supernatural, divine anointing, and virtually touched the world with God’s love.

Dr. Graham concluded his autobiography by adding, “I know that soon my life will be over. I thank God for it, and for all He has given me in this life. But I look forward to heaven.

“I look forward to the reunion with friends and loved ones who have gone on before. I look forward to Heaven’s freedom from sorrow and pain. I also look forward to serving God in ways we can’t begin to imagine, for the Bible makes it clear that Heaven is not a place of idleness.

“And most of all, I look forward to seeing Christ and bowing before Him in praise and gratitude for all He has done for us, and for using me on this earth by His grace – just as I am.”

Billy Graham will be buried next to his wife, Ruth, at the foot of a cross-shaped walkway in the prayer garden of the Graham Library at 4330 Westmont Drive in Charlotte. 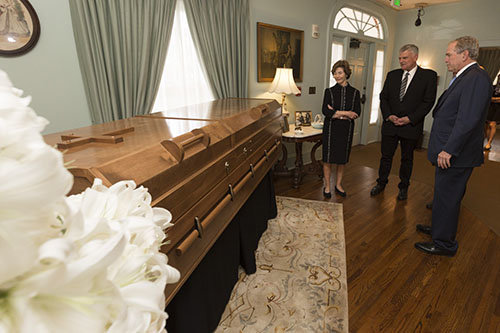 President George Bush and his wife, Laura, stand with Franklin Graham and pay their respect to Reverend Billy Graham as they view the casket made by the inmates of Angola Prison. KATHY KMONICEK/AP

End of an era?

Franklin Graham preached at the Louisiana prison in the early 2000s and saw the caskets made by and for the inmates and selected two of them for his parents because he knew they would want something simple and plain.

The three prisoners who worked on the Graham caskets were Richard “Grasshopper” Liggett, David Bacon, and Clarence Wilkerson. Liggett, who began serving a life sentence at Angola for second-degree murder in New Orleans, was the one who played the key role in getting the coffins built. Liggett, who died of cancer in March 2007, was the leader of a small group of inmates who built the caskets in the prison’s wood shop. Their names are burned into the wood of the coffins they made.

Burl Cain was warden of Angola when Franklin Graham visited the prison in the early 2000s. He was the man who turned the bloodiest prison in America into a place of hope. He opened the prison to Christian ministries in a determined effort to save souls, reduce violence, and provide hope to the inmates. He noted that inmates who died in prison were buried in cheap, cardboard-like boxes. When he considered the fact that there were excellent woodworkers in the prison and evaluated the resources in the wood shop he decided that prisoners could build their own coffins. 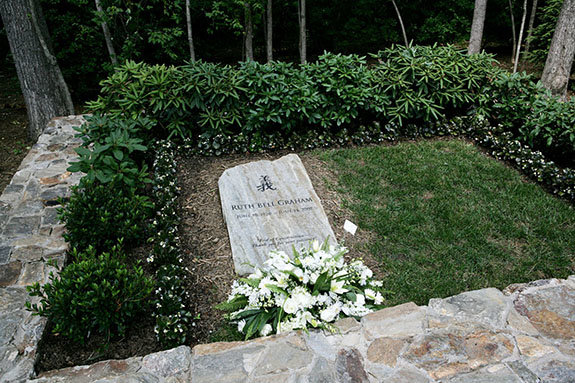 Grasshopper not only led his team to build the coffins for the Grahams, but he constructed his own.

There is no substantial difference between the coffins of the Grahams and the ones made for the prisoners.

Due to several illnesses in recent years, Billy Graham no longer could function as the powerful preacher he had been for most of his life. He was a prisoner of sorts in a body that was frail and week, but one day he will arise out of a decaying body and a coffin made by prisoners with a body that is incorruptible and immortal.

Unfortunately, the death of Billy Graham may also be the death of an era of evangelism in America that we may never see again. We can only pray that God will raise up a new generation of evangelists.