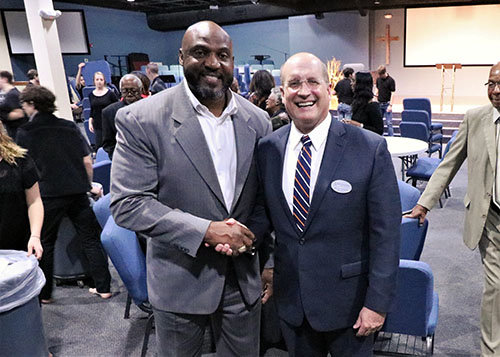 Fred Stokes, former NFL player and a Vidalia native, poses with Steve Echols, president of Brewton-Parker College, at the Warren C. Crawley Sr. Celebration of Heritage Banquet on Feb. 3. Stokes's humor and storytelling engaged the audience as he delivered a powerful speech on actions that are done in secret. LAUREN MOYE/BPC

VIDALIA — A crowd of more than 275 people from a variety of backgrounds joined at First Baptist Church here Feb. 3 to celebrate the contributions from more than a century ago of a former slave, landowner, and philanthropist.

"The legacy of Warren C. Crawley is love," remarked Brewton-Parker College President Steve Echols to the group. "A man who had been a slave, who had every right to be bitter ... was able to have the kind of love that comes through Jesus Christ."

Crawley's story begins around 1842 when, as a child, he was stolen from his family in Richmond, VA. Soon he arrived in Montgomery County in south Georgia as a slave. Despite that beginning, he grew to become a prosperous merchant in the area and landowner at a time when either was remarkable for a black man to accomplish.

In the early 1900s Crawley's generosity led to the construction of two Montgomery County landmarks. Warren Chapel, built in 1903, sat on land donated by Crawley in downtown Mount Vernon. Eventually it merged with Nepsey Methodist Church to form Nepsey-Warren UMC in nearby Ailey.

Crawley had been a landowner for 25 years by the time John Brewton, pastor of McRae Baptist Church, and businessman Charles Parker resolved to build a school in the area. However, the two needed five more acres for the 15-acre project.

Crawley, knowing his children and grandchildren wouldn't be allowed to attend the institution due to their race, donated the land anyway.

With the donation Union Baptist Institute came into being in 1904. Soon, it changed its name to Brewton-Parker College in honor of its founders. But lately, steps have taken place to honor the third leg of the school's beginning.

What to do with an opportunity

The Warren C. Crawley Celebration of Heritage Banquet served to not only acknowledge its namesake, but other local African Americans as a part of Black History Month. 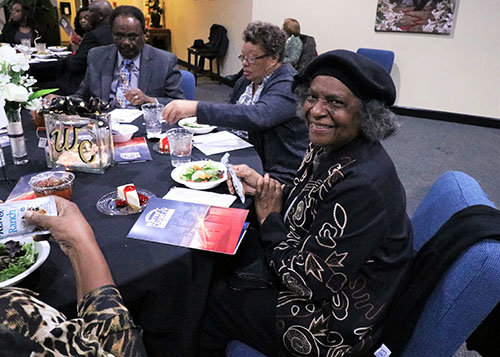 Over 275 people gathered for the Warren C. Crawley Sr. Celebration of Heritage Banquet on February 3, 2018. The desire to celebrate Crawley's legacy united people from different races, ages, and even geographical locations. LAUREN MOYE/BPC

Speaker Fred Stokes, a Vidalia High School alumnus and ten-year NFL veteran whose Washington Redskins won Super Bowl XXVI, joined eight other dignitaries from around Southeast Georgia. His message focused on how actions done in secret will be rewarded in the open.

"When you see an opportunity, what are you going to do about it?" he asked. "And yes, this is a great moment to honor a great man. But what opportunities are standing in front of you that you are going to embrace?"

The banquet served as a fundraiser for renaming a section of BPC dorms after Crawley. The goal of $350,000 will not only go towards completing the fourth male dormitory in the Baron Ridge Area. It will also help in the paving and landscaping for the renamed Warren C. Crawley Commons area.

The banquet, organized by Crawley's descendants and Brewton-Parker College administration, was sponsored by Ameris Bank.