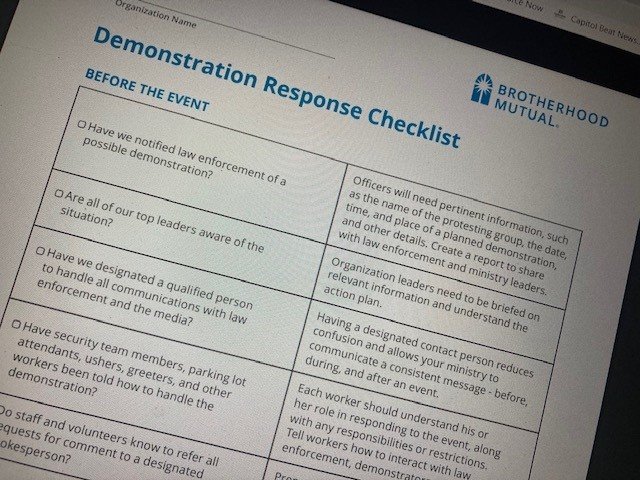 Brotherhood Mutual offers resources like this checklist for churches to prepare for potential protests.
Posted Friday, June 24, 2022 12:00 am

Editor's note: With tensions high following the Supreme Court decision overturning Roe v. Wade, here are recommendations from Brotherhood Mutual, a major insurer of churches, on how to handle demonstrations on church grounds.
___

Protests occur at worship centers across the country for a number of reasons. Hate groups, social activist organizations, and others spread their message by staging events that provoke confrontation and attract media attention. If demonstrators were to appear on your doorstep next Sunday, would you know what to do?

Make it a non-event

Your ultimate goal should be to give as little attention to demonstrators as possible.

Avoid counter protests. Like a bellows, attention to demonstrators can fan hot coals into a full-blown fire.

Don't respond to protesters. Reduce the chances of a protest or demonstration growing into something more destructive.

Protect your people. It’s important not to ignore a demonstration, either. Concern for the safety and security of those attending church requires you to deal with demonstrators appropriately>

Three steps to finding a balance

You may find the following three action steps help your ministry strike the proper balance of minimizing the protest’s effectiveness while monitoring a potential threat.

Step 1: Call police. This is the single most effective step your ministry can take to avert problems.

Step 2: Craft your message. After giving local law enforcement any information you have about a pending demonstration, the next step is to craft the message that your church wants to communicate before, during, and after this event. Often, media will cover a church protest.

Step 3: Coach the Congregation. To prepare your church to be united in the face of protests, you’ll need to instruct members how to respond appropriately.

When picketers line the street across from your church, it can be difficult to understand how the same set of laws that give you freedom to worship also protect those who oppose your beliefs.

But they do, and courts have consistently protected the right of American citizens to express their opinions publicly, even if the messages are unpopular or offensive.

By understanding the pitfalls of confronting protesters, your ministry can be better equipped to respond when people with picket signs show up at your door. By refusing to give the demonstration air time, you can smother a potential fire and help turn a planned demonstration into a non-event.