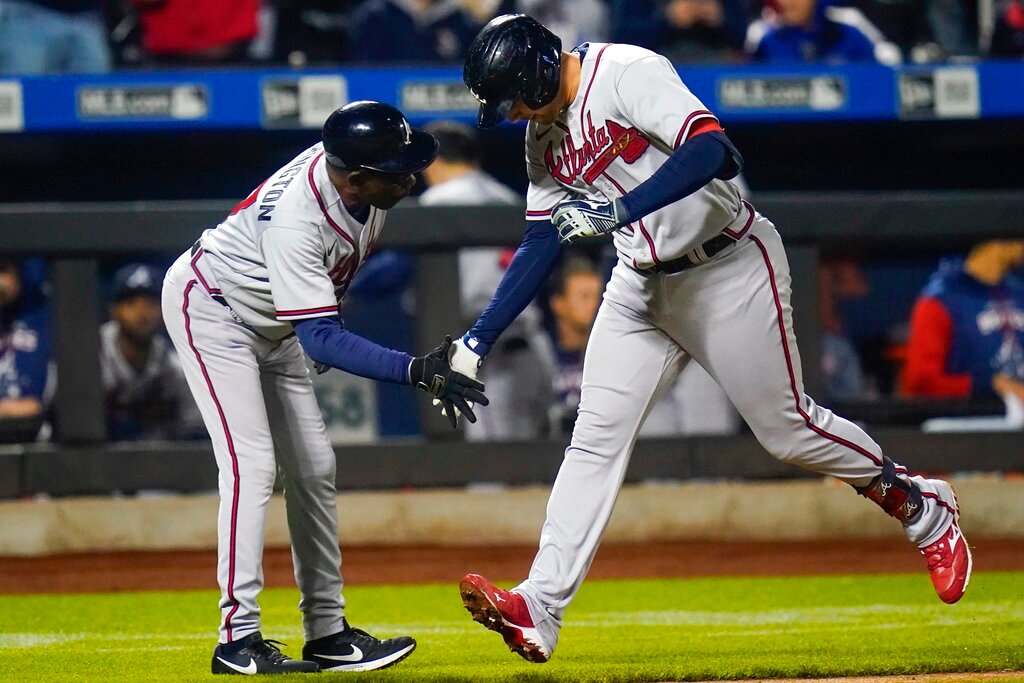 Atlanta Braves' Austin Riley, right, celebrates with third base coach Ron Washington as he runs the bases after hitting a home run during the fourth inning of a baseball game against the New York Mets, Monday, May 2, 2022, in New York. (AP Photo/Frank Franklin II) 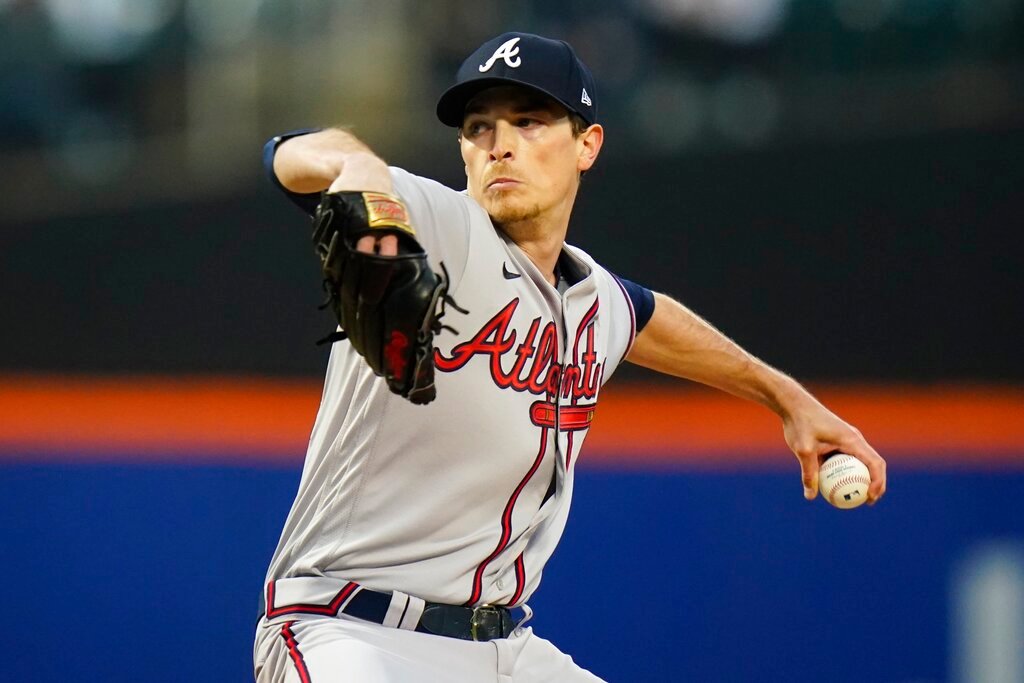 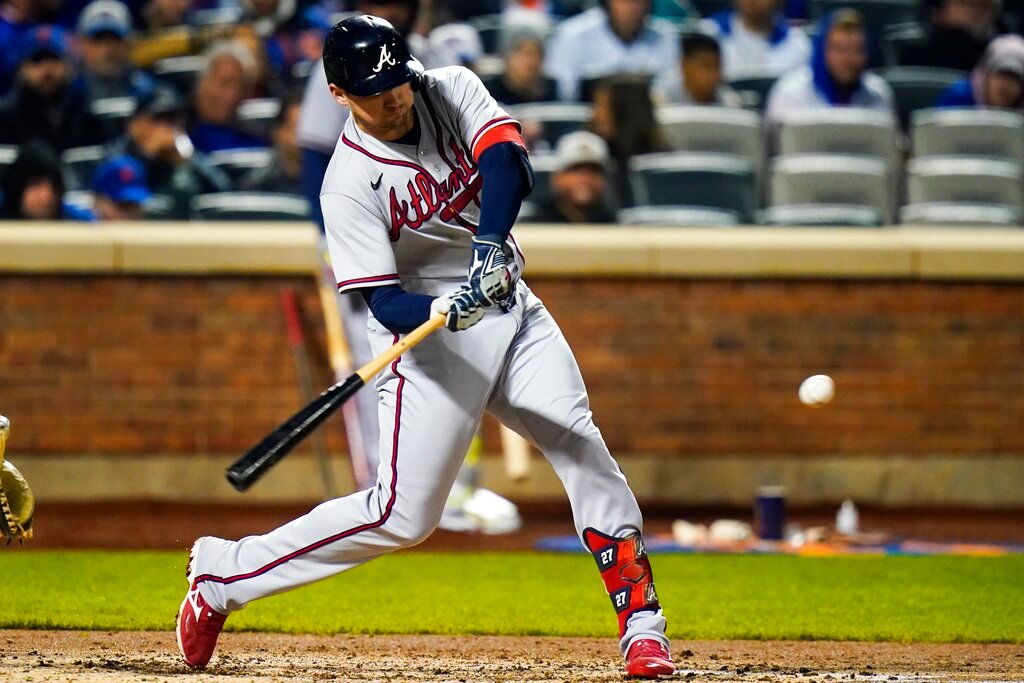 Atlanta Braves' Austin Riley hits a home run during the fourth inning of a baseball game against the New York Mets Monday, May 2, 2022, in New York. (AP Photo/Frank Franklin II)
Previous Next
Posted Tuesday, May 3, 2022 8:42 am
By MIKE FITZPATRICK, Associated Press

NEW YORK (AP) — While the Atlanta Braves have stumbled out of the gate, the New York Mets are off to a fast start and look like a legitimate threat to the reigning champions.

But the Braves didn't win those rings by accident.

Austin Riley homered, Max Fried won his third straight outing and Atlanta cooled off the Mets with a 5-2 victory Monday night in the first of 19 meetings between the National League East rivals this season.

“We've been having a rough time here lately and we put something together, so it was good for us to get this win,” manager Brian Snitker said.

Travis d'Arnaud had three hits and three more RBIs against his former team. Fried (3-2) settled in after a rocky start, outpitching Chris Bassitt in Atlanta's second comeback win of the season to open the four-game series.

Mark Canha hit his first home run for the division-leading Mets (16-8), who played without manager Buck Showalter. He was suspended for one game about 20 minutes before the first pitch after Major League Baseball determined New York reliever Yoan López intentionally threw at Philadelphia slugger Kyle Schwarber the previous night.

“We were surprised, I can tell you that,” Sherlock said. “It was close to game time, but like I said, that’s baseball and that’s really not our decision. Just have to deal with it.”

On a misty, 53-degree night, Riley got the Braves started in the sixth inning with a leadoff single. One out later, Ozzie Albies grounded a single through the open left side of an overshifted infield and d'Arnaud flared an 0-2 slider from Bassitt into shallow right field for a tying double.

“It's better to be lucky than good sometimes," d'Arnaud said. “We believe in ourselves and we know we're a good team and today we had everything going except my (pitch) blocking.”

Adam Duvall's sacrifice fly gave Atlanta a 3-2 lead, and d'Arnaud added a two-run double off struggling reliever Trevor May in the eighth.

The catcher is 9 for 16 (.563) with five extra-base hits and eight RBIs in four games at Citi Field since leaving the Mets.

Collin McHugh entered with the bases loaded in the seventh and struck out Canha to end the inning.

“Kind of the game on the line at that point in time,” McHugh said. “It's what you live for.”

A.J. Minter worked a 1-2-3 eighth and Kenley Jansen got three outs to remain perfect in seven save chances with his new team.

“We haven't played our best baseball, but tonight was a good one,” McHugh said.

Fried went six innings, allowing two runs and four hits. The left-hander struck out six and walked none, leaving him with 27 Ks against one walk this year.

“I think I'm in a really good spot with my delivery,” Fried said.

Bassitt (3-2) permitted three runs and six hits in a season-high seven innings. He struck out eight and walked one.

Starling Marte doubled in the second and scored on a wild pitch by Fried. Canha connected in the third to make it 2-0.

After that, Fried retired 11 of his final 12 batters — striking out five. The only one to reach safely was Jeff McNeil on a bunt single.

“It was a really sharp outing for him,” Snitker said. “His last inning might have been his best. It’s good to see that.”

Riley launched his seventh home run of the season leading off the fourth.

In the seventh, Braves star Ronald Acuña Jr. made a bid for his first extra-base hit since returning last week from knee surgery last summer for a torn knee ligament, but center fielder Brandon Nimmo made a leaping grab at the 408-foot sign to end the inning.

Braves: Snitker said he wasn't worried about Acuña playing right field on the potentially slick surface after it rained much of the day in New York. Acuña will likely play one game during Tuesday's doubleheader, Snitker said.

Mets: May said he's not 100% healthy and will have an MRI on Tuesday. “It’s hard to compete when you’re just worried about whether or not something’s going to hurt to throw or not,” he said. “By the end of tonight, I was just hoping that the ball was hit at somebody and that’s no way to throw in a major league game. I don’t deserve it, but my teammates definitely don’t deserve it. ... It’s to the point now where I hope we either find something or find nothing.”

WHEN YOU GET BACK

López, optioned to Triple-A Syracuse following Sunday’s victory, received a three-game suspension that starts whenever he returns to the active big league roster — unless he appeals.

The teams play a single-admission doubleheader Tuesday. RHP Charlie Morton (1-2, 7.00 ERA) will start the opener for Atlanta, with RHP Kyle Wright (3-0, 1.13) going in the nightcap. RHP Carlos Carrasco (1-1, 4.09) and LHP David Peterson will pitch for the Mets, although Showalter would not reveal the order before Monday's game.