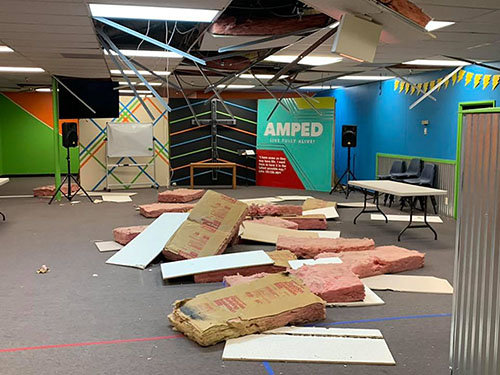 After enduring two earthquakes – one July 4 followed by a second July 5 – Immanuel Baptist Church in Ridgecrest, California needed to cancel Sunday services. Parts of the ceiling came down throughout the church building. IMMANUEL BAPTIST/Special

RIDGECREST, Calif. (BP) — A group of local church volunteers had finished a day of cleaning up and repairing damage to Immanuel Baptist Church, Ridgecrest, California following a 6.4 earthquake on July 4. The next night, the 7.1 earthquake undid their hard work and then some.

"I was at home with my wife for the 7.1," said Bill Logan, pastor of Immanuel Baptist. "There was a 5.0 that happened first. When it hit, we wanted to be out of the house. Then, about three minutes later, the seven hit, and all our neighbors were screaming."

Logan has lived in Southern California for more than 30 years and experienced several earthquakes over his lifetime, "but nothing like what occurred Thursday and Friday," he said.

The ceiling came down across several areas around the church, littering floors with ceiling tiles, insulation, and exposing parts of the air conditioning system. The damage forced the church to cancel Sunday services, but Logan said his was the only Southern Baptist church in the area that had to do so.

Southern Baptist Disaster Relief (SBDR) volunteers have visited Ridgecrest to assess the needs, and a team plans to arrive to provide chaplaincy and counseling services to those affected. The tremors created a sense of dread for some residents.

"After the first quake hit, experts were saying there as an 8 percent chance of one bigger than that striking," said Mike Bivins, SBDR director for California Baptists. "Well, the bigger quake did come, and experts again said there was a 5 percent chance that an even bigger quake could occur. So, people are worried."

A California Baptist SBDR team arrived Tuesday, July 9 to help with repairs to the church as well as assist any others in the church's neighborhood.

"We have made contact with our Southern Baptist churches," Bivins reported, "and we're going to be supporting and resourcing them as disaster relief."

Ridgecrest police have not reported any fatalities. Damage has reportedly been relatively minor for an earthquake of such magnitude. But the Federal Emergency Management Agency (FEMA) and other seismologists estimated that a total of more than 3,000 earthquakes followed the Independence Day quake.

While on the phone Monday morning, July 8 discussing disaster relief assistance, Logan felt an earthquake. He guessed it was likely a 4.0 on the Richter scale.

The earthquakes emanated roughly 10 miles northeast of the small town and rattled much of Southern California, Nevada, and Arizona. California Gov. Gavin Newsom declared a state of emergency the following day in Ridgecrest and San Bernardino County.

Newsom called the quakes a "wake-up call for the rest of state and other parts of the nation" when speaking with the press, advising individuals to take precautions and be prepared.

Some residents of Trona, California in San Bernardino County were being transported to Ridgecrest as the town of about 2,500 people reportedly experienced more extensive damage.

Bivins stated that California Baptist SBDR teams are ready to assist further should they be needed.

In other disaster relief news, after a flood struck the Texas Rio Grande Valley nearly two weeks ago, Southern Baptists with the Southern Baptists of Texas Convention (SBTC) and Texas Baptist Men (TBM) have been active in the area, providing food for survivors and clearing out mud from flooded homes.

SBTC and TBM units also continue their efforts to assist with the immigration influx by providing feeding and shower units to churches near the Texas border.