NASHVILLE (BP) –  Church pews may be full of teenagers, but a study released Tuesday (Jan. 15) suggests college students might be a much rarer sight on Sunday mornings.

Two-thirds (66 percent) of American young adults who attended a Protestant church regularly for at least a year as a teenager say they also dropped out for at least a year between the ages of 18 and 22, according to a study from LifeWay Research. Thirty-four percent say they continued to attend twice a month or more. 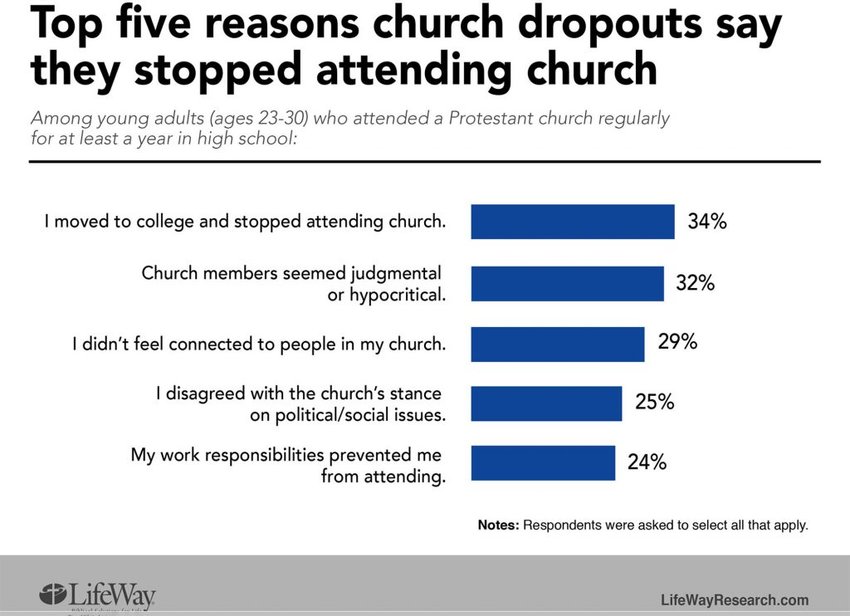 While the 66 percent may be troubling for many church leaders, the numbers may appear more hopeful when compared to a 2007 study from LifeWay Research. A decade earlier, 70 percent of 18- to 22-year-olds left church for at least one year.

"The good news for Christian leaders is that churches don't seem to be losing more students than they were 10 years ago. However, the difference in the dropout rate now and then is not large enough statistically to say it has actually improved," said Scott McConnell, executive director of LifeWay Research.

"The reality is that Protestant churches continue to see the new generation walk away as young adults. Regardless of any external factors, the Protestant church is slowly shrinking from within."

When they drop out

The dropout rate for young adults accelerates with age, according to the latest survey conducted Sept. 15–Oct. 13, 2017. 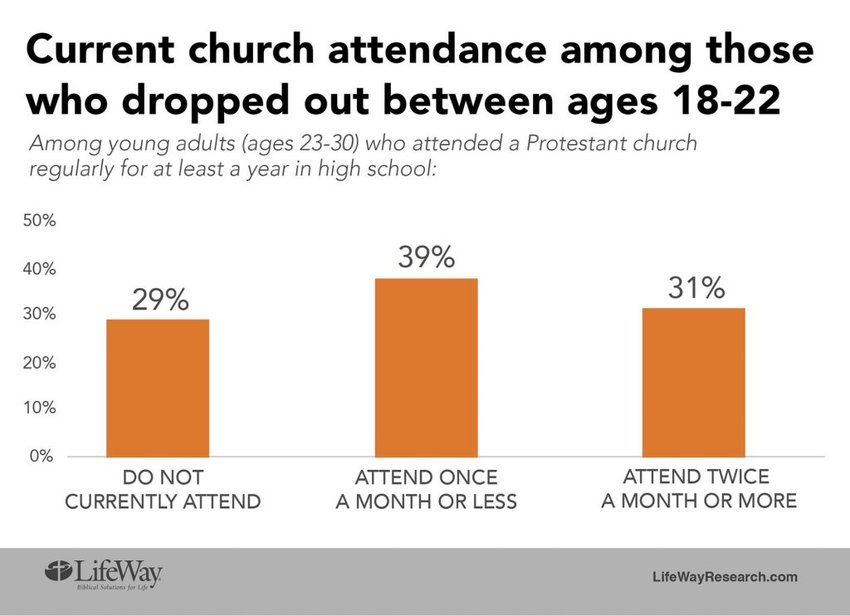 "As those teenagers reach their late teen years, even those with a history of regular church attendance are pulled away as they get increased independence, a driver's license, or a job. The question becomes: will they become like older adults who have all those things and still attend or will students choose to stay away longer than a year."

Ben Trueblood, director of student ministry at LifeWay, said those numbers speak to the issue at hand. "We are seeing teenagers drop out of the church as they make the transition out of high school and student ministry," he said. "This moment of transition is often too late to act for churches."

Why they drop out

Virtually all of those who dropped out (96 percent) listed a change in their life situation as a reason for their dropping out. Fewer say it was related to the church or pastor (73 percent); religious, ethical, or political beliefs (70 percent); or the student ministry (63 percent). 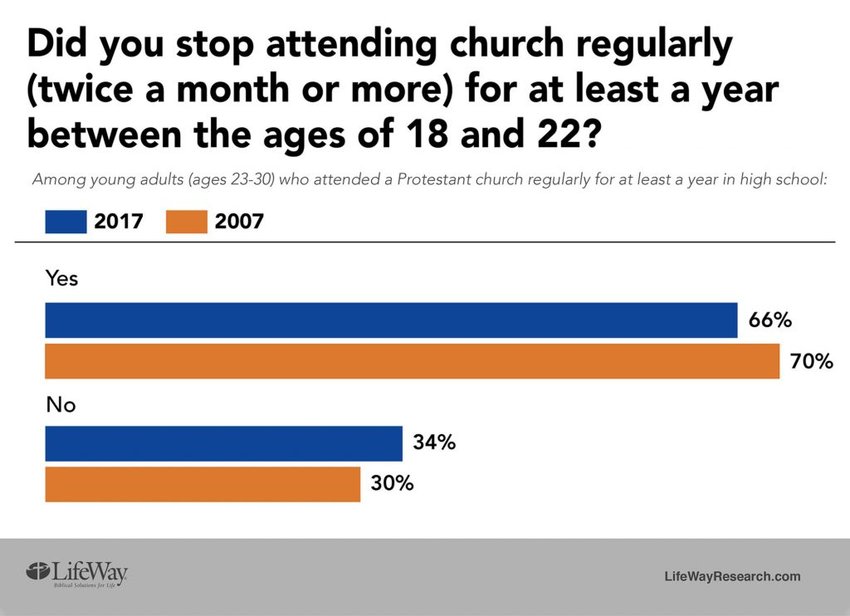 The five most frequently chosen specific reasons for dropping out were: moving to college and no longer attending (34 percent); church members seeming judgmental or hypocritical (32 percent); no longer feeling connected to people in their church (29 percent); disagreeing with the church's stance on political or social issues (25 percent); and work responsibilities (24 percent).

Nearly half (47 percent) of those who dropped out and attended college say moving to college played a role in their no longer attending church for at least a year.

"Most of the reasons young adults leave the church reflect shifting personal priorities and changes in their own habits," McConnell said. "Even when churches have faithfully communicated their beliefs through words and actions, not every teenager who attends embraces or prioritizes those beliefs."

Among all those who dropped out, 29 percent say they planned on taking a break from church once they graduated high school. Seven in 10 (71 percent) say their leaving wasn't an intentional decision.

"For the most part, people aren't leaving the church out of bitterness, the influence of college atheists or a renunciation of their faith," Trueblood said.

"What the research tells us may be even more concerning for Protestant churches: there was nothing about the church experience or faith foundation of those teenagers that caused them to seek out a connection to a local church once they entered a new phase of life. The time they spent with activity in church was simply replaced by something else."

Where are they now?

Not all teenagers leave church as a young adult. A third (34 percent) say they consistently attended twice a month or more through the age of 22.

Those who stayed saw the church as an important part of their entire life. When asked why they stayed in church, more than half say the church was a vital part of their relationship with God (56 percent) and that they wanted the church to help guide their decisions in everyday life (54 percent).

Around 4 in 10 (43 percent) say they wanted to follow the example of a parent or other family member.

Similar numbers say they continued to attend because church activities were a big part of their life (39 percent), they felt church was helping them become a better person (39 percent), or they were committed to the purpose and work of the church (37 percent).

Among all young adults who attended church regularly at least one year as a teenager, nearly half (45 percent) currently attend at least twice a month, including more than a quarter (27 percent) who attend once a week or more.

Among those who dropped out for at least a year, 31 percent are currently attending twice or month or more.

"On some level, we can be encouraged that some return," said Trueblood, "while at the same time, we should recognize that when someone drops out in these years there is a 69 percent chance they will stay gone."

He advised churches to begin by working to lower the number who leave in the first place. "There are steps we can begin taking with those currently in student ministry that will keep them connected from the beginning of these years."

Trueblood also asserted churches should have a strategic focus on individuals during those traditional college years.

"In many places this is a forgotten, under-resourced ministry area," he said. "Focus is placed on children, students, and then not again until someone enters the 'young family' stage. This needs to change."

Among those who attended a Protestant church as teenager, 7 in 10 say they're Protestant now. Another 10 percent identify as Catholic. Few say they are agnostic (4 percent) or atheist (3 percent).

"While some young adults who leave church are rejecting their childhood faith, most are choosing to keep many of the beliefs they had, but with a smaller dose of church," McConnell said.

A demographically balanced online panel was used for interviewing American adults between the ages of 23 and 30 years old. The study was sponsored by LifeWay Students.

The survey was conducted Sept. 15–Oct. 13, 2017. Slight weights were used to balance gender, ethnicity, education, and region. The sample was screened to only include those who attended a Protestant church regularly (twice a month or more) for at least a year in high school. The completed sample is 2,002 surveys.

The sample provides 95 percent confidence that the sampling error from the online panel does not exceed plus or minus 2.4 percent. This margin of error accounts for the effect of weighting. Margins of error are higher in sub-groups.

LifeWay Research is a Nashville-based evangelical research firm that specializes in surveys about faith in culture and matters that affect churches.

Aaron Earls is a writer for LifeWay Christian Resources.