Church sees over 100 professions of faith through online evangelism groups 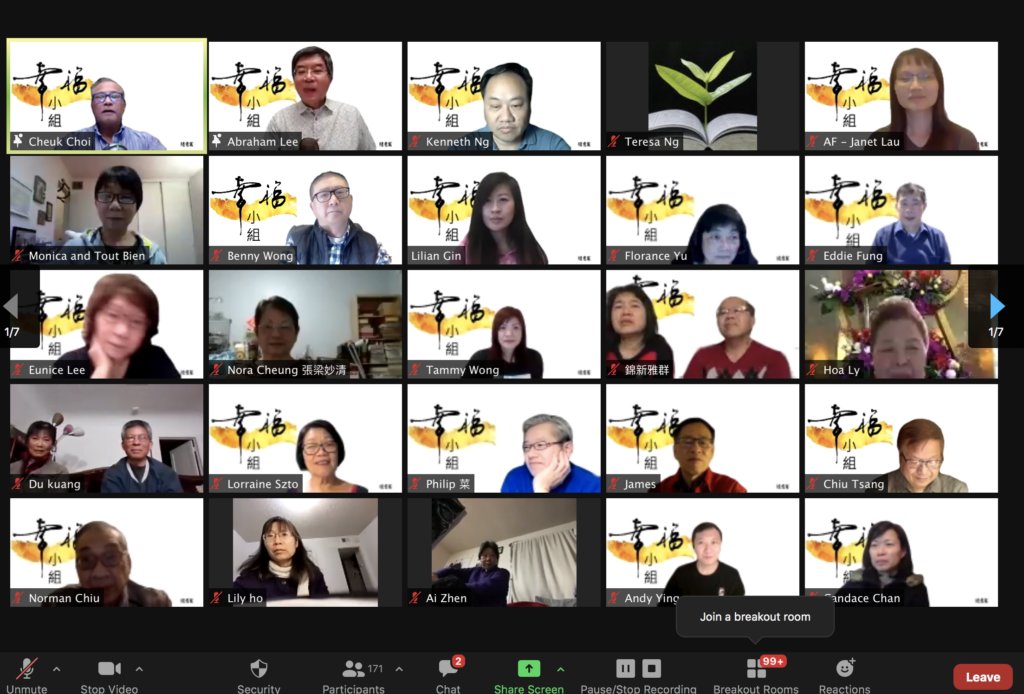 Online Bible study groups turn out to be fertile fields for soul winning. One California churches has seen more than 100 professions of faith.

LOS ANGELES (BP) — Despite not meeting in person for over 15 months due to the COVID-19 pandemic, First Chinese Baptist Church Los Angeles, CA., has seen more than 100 professions of faith through a new group evangelism strategy.

The small groups are made up of at least five or six church members and take place on Saturdays for eight consecutive weeks. Each of the meetings contain elements such as ice-breakers, singing, a biblical message and a personal testimony from one of believing members of the group.

Every believer in the Happiness Groups is required to bring a non-believing friend or family member to the group who can attend all eight sessions. A personal invitation to accept Christ is extended to every non-believer at the end of every group meeting.

Wong said although the specific group evangelism strategy is new to First Chinese Baptist (which is the only Chinese Southern Baptist Church in Chinatown), the methods entailed in the groups are “nothing new under the sun.”

“One of the most important things our congregation is learning is evangelism is not just one of the ministries, evangelism is every disciple’s responsibility,” Wong said. “Although there is a place for personal evangelism, I’m learning that group evangelism can be a lot more effective.”

The idea for the Happiness Groups did not originate with Wong or First Chinese Baptist Los Angeles.

Wong originally heard about the idea for Happiness Groups through several Christian conferences he attended in 2019 both in America and Taiwan.

He said he was amazed at the intentional evangelism the groups advocated for and began training a few members of First Baptist to pilot Happiness Groups in early 2020.

Shortly after the training began, everything had to be shut down due to the pandemic.

Like many churches in California, First Baptist was forced to host online only events for the rest of the year and into 2021.

Wong eventually reached out in late 2020 and asked the Taiwanese pastor who created the Happiness Groups strategy if he would create a training for how the groups could be done online.

The Taiwanese pastor partnered with the church to teach how they could hold these evangelism groups online, and hundreds of church members attended the trainings.

Then in February, 31 online Happiness Groups launched through First Chinese Baptist, and there have been 106 decisions for Christ to date. Wong said a majority of these decisions came from adults previously not involved with the church.

Wong was initially skeptical about the willingness of non-believers to attend these types of online groups, but said all 31 of the groups had at least one non-believer attend all eight of the sessions.

An interesting example was one church member who moved to the Los Angeles area in early 2021 not knowing a single person. He joined a Happiness Group, and ended up inviting a contractor who came to fix the air conditioning unit at his house to his Happiness Group. That worker is now heavily involved in the group and shows a great interest in learning about Christianity.

Beyond merely inviting non-believers to attend the groups, Wong said the church found other ways to serve non-believers in the community including cooking and personally delivering 250 fresh meals to non-believing members of the Happiness Groups every Saturday.

Wong said a main theme within the groups is to “touch people’s hearts as opposed to people’s minds.”

Anyone who is saved as a part of the groups is immediately placed in a 16-week discipleship training led by the church pastors. The goal of the training is to “encourage them to become missional disciples,” according to Wong.

First Chinese Baptist was hit hard by the pandemic and the restrictions in the state of California, but just began their process of re-opening by holding in May their first in-person services since the pandemic began. The church offers services in English, Mandarin and Cantonese.

Wong celebrated the fact that new people are getting saved through the groups, and that existing church members are growing spiritually through the groups. He hopes the Happiness Groups become the norm for the church, and that the renewed emphasis on evangelism continues in the future.

“A genuine disciple must get involved with evangelism, otherwise we’re not really following Christ,” Wong said. “It’s not about whether or not you have the gift of evangelism, we are all called to do the work of the evangelist. When you put people on the front lines of evangelistic work, they will grow spiritually.”