Clarkson's railroad tracks dividing the town may be representative of the national debate on immigration dividing the nation, but the town remains firmly united about helping the new Americans in their midst. Clarkson International Bible Church is shown at the right. JOE WESTBURY?Index
Posted Wednesday, February 15, 2017 6:11 am
Joe Westbury

Clarkston's railroad tracks dividing the town may be representative of the national debate on immigration dividing the nation, but the town remains firmly united about helping the new Americans in their midst. Clarkston International Bible Church is shown at the right. JOE WESTBURY/Index
CLARKSTON — Like the railroad track than runs through the heart of this enclave of refugees and immigrants, the national debate to ban those individuals divides Americans largely along partisan lines. One side of the tracks sees the individuals as threats to the American way of life, as potential terrorists who seek to undermine the nation’s values. The other side sees them as families fleeing war and famine and only wanting to become one more thread in the American fabric of life. But congregations like Clarkston International Bible Church remain a safe haven in the storm, assuring those still struggling to get their feet on the ground – much less learn a new language – that they are not lost in that heated discussion. Pastor Trent DeLoach avoids politics and focuses on the mission field that has come to his corner of America. And that’s why Clarkston Mayor Ted Terry is grateful for cool heads that prevail in his town of 7,500 residents. “Clarkston International is doing a great job under Trent and before him, longtime former pastor Phil Kitchin. The congregation has opened its heart to these individuals and showing them how kind and loving the people of Clarkston are. “I attended a Christmas program there a couple of years ago and remember Phil mentioning that the international, multicultural people sitting next to each other is what heaven will look like. That was a wonderful opportunity to experience in this lifetime,” he said. Clarkston International is doing such an exceptional job that the North American Mission Board recently announced it will partner with the church – based on a 60-day exploratory period – to expand its ministry as one of three national Send Relief ministry hubs.

In effect, NAMB will take away the church’s microphone and give it a megaphone to train others in mercy/compassion ministries. The City of Clarkston appreciates that recognition by the Southern Baptist Convention. In some ways it is tracking right alongside the church with its unwavering acceptance of refugees and immigrants. 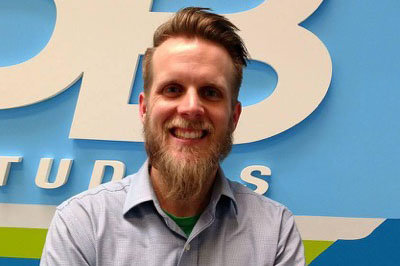 Clarkston Mayor Ted Terry affirms Clarkston International Bible Church's historic outreach to the refugee community and for standing by the group during the national debate. CITY OF CLARKSTON/Special
On February 7 – the same day NAMB trustees tentatively approved the partnership – the Clarkston City Council passed a proclamation reaffirming the town as a welcoming place of refuge to its ever-growing refugee and immigrant population. Read the document here. “We want to say, once again, that Clarkston loves refugees and we very much remain a compassionate and welcoming city. We are proud to be a part of such a blessed community of neighbors,” Terry told The Index. The document was passed in the wake of a recent national ban on immigration signed as an Executive Order by President Donald Trump. The 90-day ban caused chaos at airports internationally, resulted in protests around the world, and was suspended by the nation’s judicial syst due to a lack of detail on how the order was to be enforced. Terry acknowledged that his city has its share of crime, but sometimes immigrants are disproportionally blamed for running afoul of the law. “The crime we see in Clarkston is more of criminal activity against refugees and immigrants rather than by refugees and immigrants. There is always the crime by juvenile delinquents from any cultural group but ours is not out of the ordinary. By and large these people are fleeing from violence and terror and are not looking to recreate that environment here.” Terry said he feels that the expectation many of them have is if they want to be accepted in their new homeland that they become a productive member of society, pay their taxes, and follow the law.

“The safest people you can have in your city limits.”

“I think I would be safe in saying that among refugees, crime is among the lowest of any category of immigrant or native-born Americans. They are the safest people you can have in your city limits.” 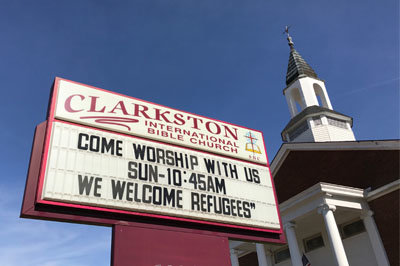 Clarkston International decided to remain and develop a ministry of compassion to its growing immigrant population when the town transitioned from largely Anglo to multicultural in the 1980s. Clarkston is known as the Ellis Island of the South. JOE WESTBURY/Index
Terry notes that half of Clarkston is foreign-born. His experience is that those individuals are grateful to be away from the violence they fled and grateful for America extending its welcome to them. “They love America and want to be a part of its success for themselves and their children,” he explains. The town’s motto, posted on signs at the city limits, sums up how it feels about their role in the national discussion … “Small Town ... Big Heart.” “Within one square mile of our city limits you can walk from churches of various Christian denominations to an Islamic mosque, a Hindu temple, and a Buddhist temple. You have all of the world’s four major religions existing very well side by side and they are very considerate and respectful of others and their property. “That is an example of the founding principles on which America was based and on what made her great among nations,” Terry adds. He is under no illusion about the anxiety felt in some parts of the nation. “I think some people are very afraid, and I acknowledge this fear. We can improve the refugee resettlement process before, during, and after they become new Americans, and I will work with the Trump administration in any way I can help. But it is important to understand that refugees in America are the safest and most peaceful people that we could have in our communities.” Terry notes that there has been a crime rate of only .4 percent among the 750,000 individuals who have been resettled in the United States since 9/11. That means only 1,100 have been deported due to committing a violent crime. “I think it’s important to note that there has been no act of domestic terrorism by refugees or immigrants since 9/11. All of the acts were committed by individuals who were self-radicalized through the Internet. We have not seen the types of terrorism that is common in Europe with people freely crossing borders to commit acts of terrorism.”

The city's motto of "Small Town ... Big Heart" on its welcome sign reflects its support of the refugee and immigrant community. JOE WESTBURY/Index
He believes the nation’s refugee and immigrant vetting system is not as weak as it has been portrayed, and can always be updated and strengthened. And he believes that fear has been exaggerated out of proportion to the problem.

“You cannot take a raft from Syria to Savannah”

“You can’t take a raft from Syria to Savannah (as some individuals arrive in Greece or other nations, washing up on shore with no documentation of who they are or from where they have come.). Arriving in Atlanta at Hartsfield-Jackson Atlanta International Airport requires years of vetting and layers upon layers of security screenings,” he notes. Some see refugees and immigrants as being a burden on the nation’s safety net of government assistance. He says that is largely a misconception because assistance has its limitations … it is not unlimited. “The government only provides six months of public housing and two-to-eight-months of food assistance. The expectation of these people, many of whom become tax-paying naturalized citizens, is to assimilate into society just like everyone else. We have a 91 percent self-sufficiency rate in Georgia, meaning that the head of the home has a full-time job and can pay their rent and other bills. That is a credit to their hard work and determination to have a better life for themselves and their children and to grow old in a very safe environment. “I think the mindset among these people is that ‘I have to work and take care of my family.’ That’s also the mindset of Americans at large and is why people come here. “We are grateful to our many nonprofits, 13 of whom are housed at Clarkston International Bible Church, and to the church and other congregations who work selflessly to teach these people our language and our culture and help them get on their feet. “Trent and the ministry of his congregation, and their ongoing commitment to stand with the refugees and immigrants in these difficult days, is a testimony to their Christian love for their fellow men and women.”

Clarkston International Baptist Church will be offering training sessions and internships through its partnership with the North American Mission Board, if approved by both entities. The Index will provide additional information on how to be more involved at that level as it becomes available. The Georgia Baptist Mission Board is actively involved in ministry to refugees and immigrants through its Intercultural Church Planting and Missions office. For more information contact call (770) 455-0404 or toll free (800) 746-4422. For information on how to be involved in teaching English as a Second Language contact State Missionary Paulette DeHart at (770) 979-0588, pdehart@gabaptist.org, or www.GaBaptist.org/LiteracyMissions.