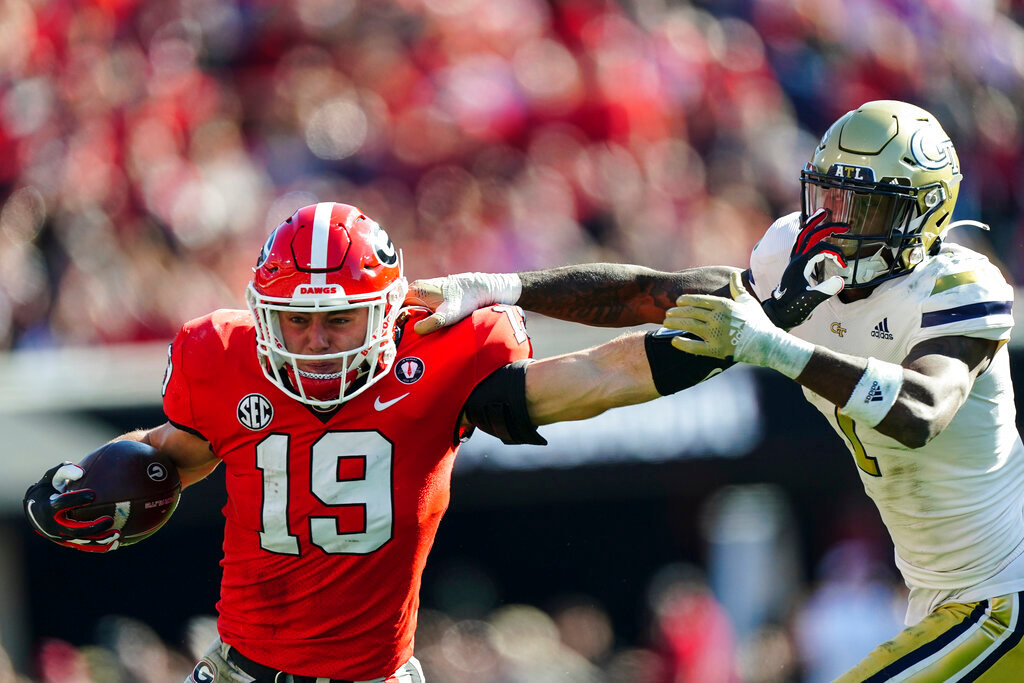 Rarely does a college football season enter the weekend of conference championship games with its playoff picture this clearly in focus.

No. 1 Georgia (No. 1 College Football Playoff ) and No. 2 Michigan (No. 2 CFP) figure to have playoff bids locked up no matter how they fare this weekend. Georgia is a big favorite over No. 11 LSU (No. 14 CFP) in the Southeastern Conference championship game and Michigan is favored over Purdue as they face off for the Big Ten title.

TCU’s situation is a little more tenuous, though the third-ranked Horned Frogs (No. 3 CFP) also would have a pretty strong argument they belong in the four-team field even if they lose to No. 13 Kansas State (No. 10 CFP) in the Big 12 championship game.

The What to Watch rundown in college football presented by Regions Bank:

The Pac-12 championship game gives USC an opportunity to avenge its only loss of the season and offers Utah a chance to defend its conference title.

USC fell 43-42 at Utah on Oct. 15 as Cameron Rising scored on a 1-yard keeper and also ran in a two-point conversion with 48 seconds left. USC is virtually assured of its first College Football Playoff berth if it gets revenge Friday.

USC QB Caleb Williams is the favorite to win the Heisman Trophy after leading the Trojans past No. 17 UCLA (No. 17 CFP ) and No. 19 Notre Dame (No. 21 CFP) the last two weeks. Williams has 34 touchdown passes with only three interceptions and also has rushed for 10 scores.

It’s hard to imagine anyone else winning the award at this point. But if Williams throws a bunch of interceptions in a loss to Utah that knocks USC out of playoff contention, perhaps it opens the door for TCU QB Max Duggan, who has 29 touchdown passes with three interceptions, or Ohio State QB C.J. Stroud.

LSU (9-3, 6-2) is attempting to become the first team to win an SEC championship game after losing at least three regular-season games since LSU’s 2001 team followed up a 9-3 regular season by beating Tennessee for the conference title. … An Atlantic Coast Conference championship game victory over No. 24 North Carolina (9-3, 6-2, No. 23 CFP) would make No. 10 Clemson (10-2, 8-0, No. 9 CFP) the first team in an active Power Five conference to win seven outright league titles in an eight-year span since Alabama won eight SEC championships in a nine-year span from 1971-79. … TCU is the first Big 12 team to go 12-0 since Texas did it in 2009. The Horned Frogs are the first Big 12 team to go unbeaten in conference play since Oklahoma in 2016. … Michigan is seeking to win consecutive Big Ten titles for the first time since 2003-04. The Wolverines have 14 straight conference victories, their longest since an 18-game league run from 1996-98. … No. 23 UTSA (10-2, 8-0 Conference USA) and Troy (10-2, 7-1 Sun Belt) enter their respective conference championship games with nine-game winning streaks. Troy hosts Coastal Carolina (9-2, 6-2) and UTSA faces North Texas (7-5, 6-2).

Coaches on the hot seat generally aren’t working this week because they haven’t gotten their teams to the conference championship games. But this week’s schedule does feature a prominent name on the coaching carousel.

Deion Sanders is coaching Jackson State (11-0, 8-0) against Southern (7-4, 5-3) in the Southwestern Athletic Conference championship game while pondering an offer from Colorado.

Ohio (9-3, 7-1 Mid-American Conference) will try to win its first MAC title since 1968 when the Bobcats face Toledo (7-5, 5-3) in the conference championship game at Detroit.

The Bobcats already have made major strides after going 3-9 last year in Tim Albin’s debut season.

Both teams are dealing with quarterback injuries.

Ohio lost Kurtis Rourke to a season-ending knee injury in a 32-18 win at Ball State on Nov. 15. CJ Harris stepped in and went10 for 21 with 196 yards and one touchdown in a 38-14 victory over Bowling Green last week.

Toledo’s Dequan Finn injured his ankle in a 20-14 loss at Western Michigan last week, with Tucker Gleason playing the rest of the game.