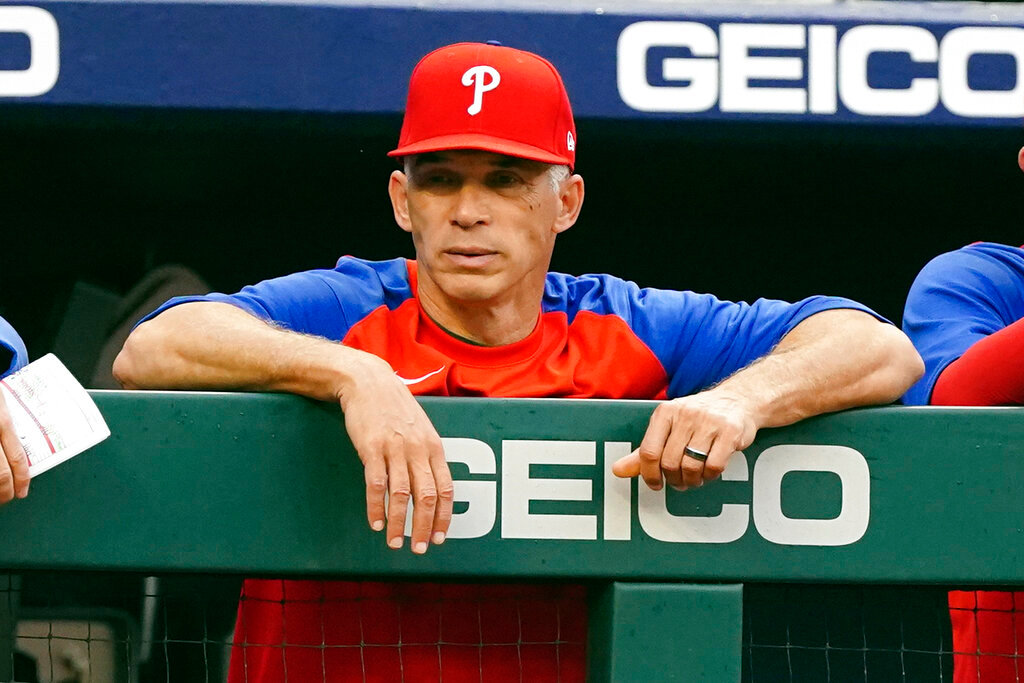 Philadelphia Phillies manager Joe Girardi watches from the dugout during the first inning against the Atlanta Braves on Wednesday, May 25, 2022, in Atlanta. (AP Photo/John Bazemore) 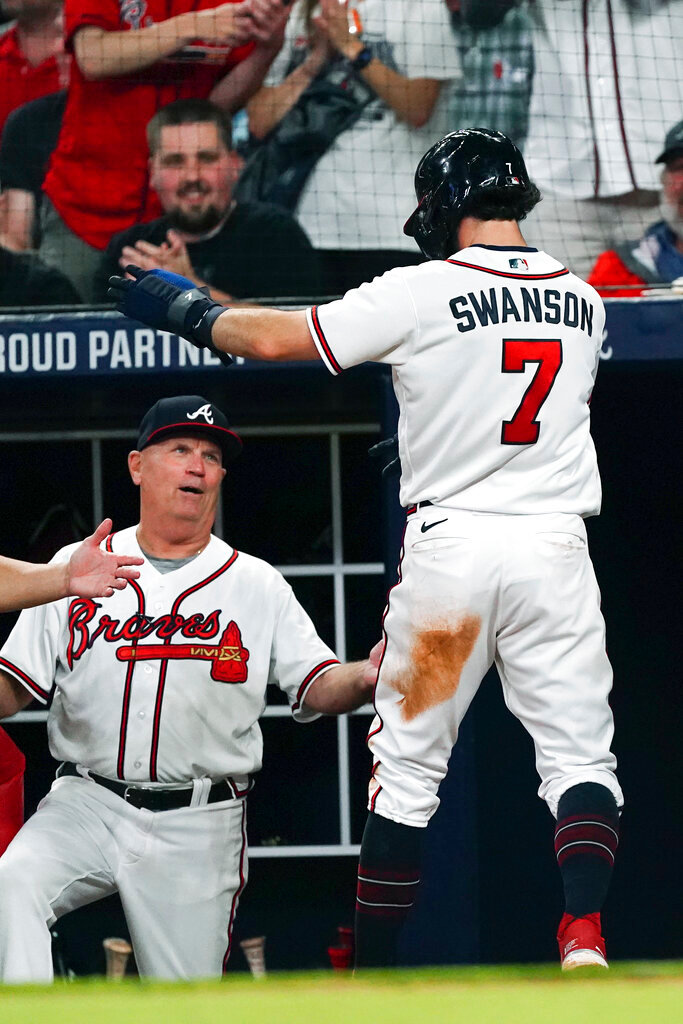 Atlanta Braves’ Dansby Swanson (7) is greeted by manager Brian Snitker after scoring on a wild pitch and a fielding error in the fifth inning against the Philadelphia Phillies Wednesday, May 25, 2022, in Atlanta. (AP Photo/John Bazemore)
Previous Next
Posted Wednesday, May 25, 2022 11:09 pm
By GEORGE HENRY, Associated Press

ATLANTA (AP) — Dansby Swanson scored the tiebreaking run in the fifth inning on an excruciating defensive sequence by the Phillies, and the Atlanta Braves beat Philadelphia 8-4 on Wednesday night.

Swanson singled and came around to score for a 5-4 lead on a play that started with a wild pitch by reliever José Alvarado (0-2) and a high throw from catcher J.T. Realmuto in an attempt to keep Swanson from reaching second.

The miscues got worse from there.

The ball sailed past the outstretched gloves of Jean Segura at second and Bryson Stott at shortstop, then went under the glove of center fielder Odúbel Herrera for a two-base error.

It appeared both Segura and Stott could’ve caught the ball — neither was charged with an error — and kept it from getting away. Herrera charged and overran the ball, then looked even more hapless as he retreated to pick it up near the warning track.

Austin Riley followed with his ninth homer to make it 6-4. Swanson, who went 4 for 5, connected with his sixth homer, an opposite-field shot to right, for a 7-4 lead in the sixth. He also added an RBI single in the four-run second.

Charlie Morton, a 38-year-old making his 300th career start, stranded runners at third in the first and fourth, yet he couldn’t escape trouble in the fifth as the Phillies scored twice to tie it at 4. He was chased on Segura’s RBI single.

Morton went 3-2 with a 2.19 ERA in five starts against Philadelphia last year, but he wasn’t as fortunate this time, getting charged with nine hits and four runs in 4 1/3 innings.

Ranger Suárez had a 2.49 ERA since becoming a full-time Phillies starter Aug. 2 and had a 1.91 ERA in seven road starts since joining the rotation. He didn’t fare as well against Atlanta, giving up five runs and six hits in 4 1/3 innings.

Spencer Strider (1-1) got the win in relief.

Atlanta took a 4-1 lead in the second. After William Contreras’ seventh homer narrowly cleared the wall in left, Ozzie Albies had a two-run single. Swanson followed with a single that scored Albies from second.

Morton trailed 1-0 in the second when Herrera hit his third homer, a 431-foot shot that hit off the Chop House façade in right field. Herrera added an RBI single in the fourth that trimmed the lead to 4-2.

The Braves have won seven of eight against Philadelphia at home and are 28-15 versus the Phillies since Truist Park opened in 2017.

Phillies slugger Bryce Harper, a two-time NL MVP, is 7 for his last 8, which includes three doubles and a homer.

Philadelphia's poor defense came one night after a wild pitch allowed Swanson, who had doubled, to advance to third in the ninth inning. Center fielder Roman Quinn followed by calling for a fly ball that bounced off his glove and fell between him and right fielder Nick Castellanos. Swanson scored and Ronald Acuña Jr., who hit the ball, scored from second when Contreras singled him in for the walkoff win.

2-time Wimbledon champ Murray loses to Isner in 2nd round