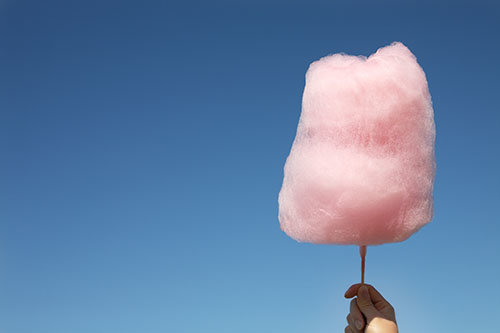 Sweet to taste yet mostly sugar and air, cotton candy satisfies for a moment but leaves one empty, much like many sermons today, writes Gerald Harris. GETTY/Special

I have heard some young pastors in recent days who have preached the Word of God with clarity, boldness, and fervor. I was incredibly blessed as I listened to their hermeneutically correct, homiletically powerfully sermons. It is immeasurably good to know that we have a new generation of preachers who know how to “shuck the corn."

However, I fear that such Biblically-based, spirit-anointed, Christ-exalting preaching may be the exception rather than the norm today.

The Baptist Pillar stated, “A great deal of preaching today is weak and pointless. It is so weak, if it was poison it wouldn’t kill anybody and if it was medicine, it would cure anybody.

A.W. Tozer, prolific author and powerful preacher, said he noticed as a young Christian many preachers “spoke so gingerly, so apologetically that one got the impression that they would rather remain silent forever than offend anyone.”

Leonard Ravenhill, the evangelist, revivalist, and author, once stated, “I would sooner expect a frog to sit down and play Beethoven’s Moonlight Sonata than expect to see some of the slick preachers of this hour preach with an anointing that would cause godly fear among the people.”

It can be said without fear of contradiction that the apostate church is marked by appeasement in the pulpit and anemia in the pew. So, we have a twofold problem. First, we have people in the congregation who have become intolerant of gospel preaching and an incessant, unsatisfied craving for some titillating homily or novel speculation. Secondly, we have preachers who pander to the whims and fancies of their hearers because they want to be accepted and believe this favor fosters growth.

Isaiah shouted, “Cry out loudly, don’t hold back! Raise your voice like a trumpet.  Tell My people their transgression, and the house of Jacob their sins” (Is. 58:1). Leo Greene, once professor of Old Testament at Southeastern Seminary in Wake Forest, NC, used to say, “We have too many piccolo preachers today and not enough heralds of the truth who will lift up their voices with the sound of a trumpet.”

If there were too many piccolo preachers in the 1950s and 1960s when Green was addressing his students the problem has worsened in this postmodern society. Church members are looking for something that will soothe their consciences and boost their self-esteem; and preachers are doling out sermons that accommodate the “felt needs” of their hearers.

The Apostle Paul stated, “For the time will come when they will not endure sound doctrine; but after their own lusts shall they heap to themselves teachers, having itching ears; and they shall turn away their ears from the truth and shall be turned unto fables” (II Tim. 4:3-4).

The Greek word for “itching ears” is knethomai. It is a remarkable and picturesque word. It literally means “to itch, tickle, scratch, or rub.” This figure of speech suggests the preacher is giving his listeners what “man prefers” rather than what “God prescribes." It should also be noted that according to the Apostle Paul there is a perilous proximity between “itching ears” and fabricated “fables” or absolute heresy.

I have heard sermons on television that are downy soft, even feathery – just right for tickling itching ears. These sermons can also be described as smooth, fluffy, and sweet like cotton candy – initially appealing, but without substance and quick to vanish.

When people go to the county fair, the circus, or a ball game they see vendors with cotton candy. And it looks irresistible. To the eyes of multitudes of people cotton candy is appealing, enticing, delightful, and delicious. Yet, for the most part cotton candy is nothing more than a wisp of air sweetened with colored sugar. It has no substance nor nutritional value.

Many sermons are like cotton candy. They may appear to be attractive and even draw a crowd, but totally lacking in reality and vitality.

While we profess to design our worship experiences to please an audience of one – the thrice-holy God of the universe – we are deceiving ourselves. Alas, many church worship services are planned to please and satisfy the congregation. In fact, some church plants are preceded by a survey of the unchurched in the community to determine what kind of church they would most likely attend.

Winston Churchill once said, “Nothing is more dangerous than to live in the temperamental atmosphere of a Gallup Poll – always taking one’s pulse and taking one’s temperature.” No one should determine the course of his ministry by holding up his finger to find which way the wind is blowing. Why would any church planter allow the unregenerate population of an area dictate the kind of church he should plant?

Nevertheless, many churches are consumer-oriented and design their worship experiences to attract and gratify the congregation. Consequently, music saturated with great theology doesn’t seem to fit. Calls to discipleship and surrender are passé, and strong, doctrinal preaching is as out of place as a Rhodes scholar in a remedial math class. Therefore, people are finding it increasingly difficult to find churches where solid, Biblical, expository preaching is preeminent.

Many people who attend church today want to hear sermons that require less thinking, are self-serving, and make fewer demands. There is a consumer mentality in the pew today that prefers sermons that will help the “so called” worshipper “Learn how to be successful in five easy lessons,” “Discover the four steps to ultimate happiness,” “Employ six simple steps to financial freedom,” and/or “Find out how to keep the honey in the honeymoon.”

No wonder this generation has become known as “The unseeded generation." Do a street survey in your town or community and you will discover biblical illiteracy is becoming pandemic. That which was true in Samuel’s day is also true in our day for in I Samuel 3:1 the Bible says, “In those days the word of the Lord was rare and prophetic visions were not widespread.”

In other words, there was no divinely-accredited prophet upon whom the anointing of the Lord was known to dwell and who was qualified to proclaim His truth.

Similarly, the church needs more pastors who preach pointed, passionate, and powerful sermons from the Word of God – specifically, expository sermons. There are some preachers who lift up their voices to declare the absolute truth of God’s Word with the clarion call of a trumpet, but they are becoming more atypical. But, those preachers are the ones not merely drawing a crowd, but building a church. And there is a profound difference between a attracting a crowd and building a solid, Bible-believing, Christ-exalting, soul-winning, New Testament church.

At the same time, the church also needs people who hunger and thirst for righteousness and truth – people who are expository listeners. It is amazing how many times the Bible says, “Let him that hath ears, hear.”

In 2016 a prophetic word powerfully proclaimed combined with attentive, open-hearted listeners could conceivably result in life-transforming responses and heaven-blessed ministries.