Could ruling on cross curb hostility toward religion? 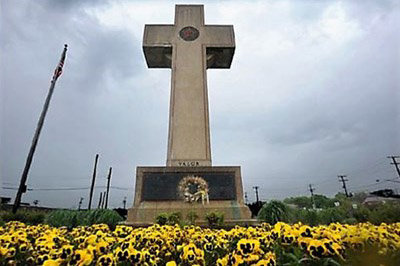 WASHINGTON (BP) — The U.S. Supreme Court's 7-2 decision June 20 in favor of a nearly century-old memorial cross in Bladensburg, Maryland appeared to some as a signal that the justices want to leave more room for religion in the public square.

The American Humanist Association sued the American Legion and local parks department to take down the 40-foot cross monument, which an American Legion post erected in 1925 to honor local men who died in World War I. A U.S. District Court judge in Maryland ruled the memorial could stay in 2015, but a three-judge panel of the 4th U.S. Circuit Court of Appeals declared the cross a violation of the Establishment Clause found in the First Amendment to the U.S. Constitution.

The case gave the justices an opportunity to clarify the court's interpretation of the Establishment Clause, which prohibits the U.S. government from establishing an official religion.

A case from the 1970s set a precedent known as the Lemon test, a multipart question used to determine whether government actions are in violation of the clause. The test, which grew out of the 1971 case Lemon v. Kurtzman, asked whether a reasonable observer would interpret a state action as an establishment of religion. The standard proved difficult to apply and led to contradictory rulings. In 2005, the Supreme Court ruled that two framed copies of the Ten Commandments on display in a couple of Kentucky courthouses violated the Establishment Clause but a 6-foot-tall granite Ten Commandments monument on the Texas Capitol grounds in Austin did not.

"The Lemon test is what has caused all this hostility to religion by the government and all these lawsuits against nativity scenes and menorahs and crosses and Ten Commandments," said Kelly Shackelford, president of First Liberty, a law firm specializing in religious liberty cases that helped defend the American Legion and its cross in Bladensburg.

In the ruling, six justices indicated the Lemon test didn't apply to a broad swath of cases, solidifying the place of religious symbolism and practice in the public square. See related story.

But their decision still leaves some issues to be worked out in future cases. While the justices agreed Lemon doesn't work, Justice Samuel Alito's main plurality opinion was only signed by three others — Chief Justice John Roberts and Justices Stephen Breyer, and Brett Kavanaugh — and the justices filed seven more opinions, signaling uncertainty about the new path forward. Justices Elena Kagan, Neil Gorsuch, and Clarence Thomas voted with the majority but filed separate opinions.

"They all had their own perspective they wanted to bring, so as a result you don't have one clean sort of guidepost for the future as to exactly how they're going to deal with the future cases," Shackelford said.

Those cases will decide what principles will govern the application of the Establishment Clause, particularly regarding new monuments and practices that incorporate religious symbolism. Shackelford said that Gorsuch and Thomas' concurring opinion indicated that courts should consider how long the symbols or practices have been in use in the country. But those standards still need to be worked out.

"The big thing is that the days of weaponizing the Establishment Clause to attack religion are over," Shackelford said.

Rachel Lynn Aldrich writes for WORLD Digital, a division of WORLD Magazine based in Asheville, NC.