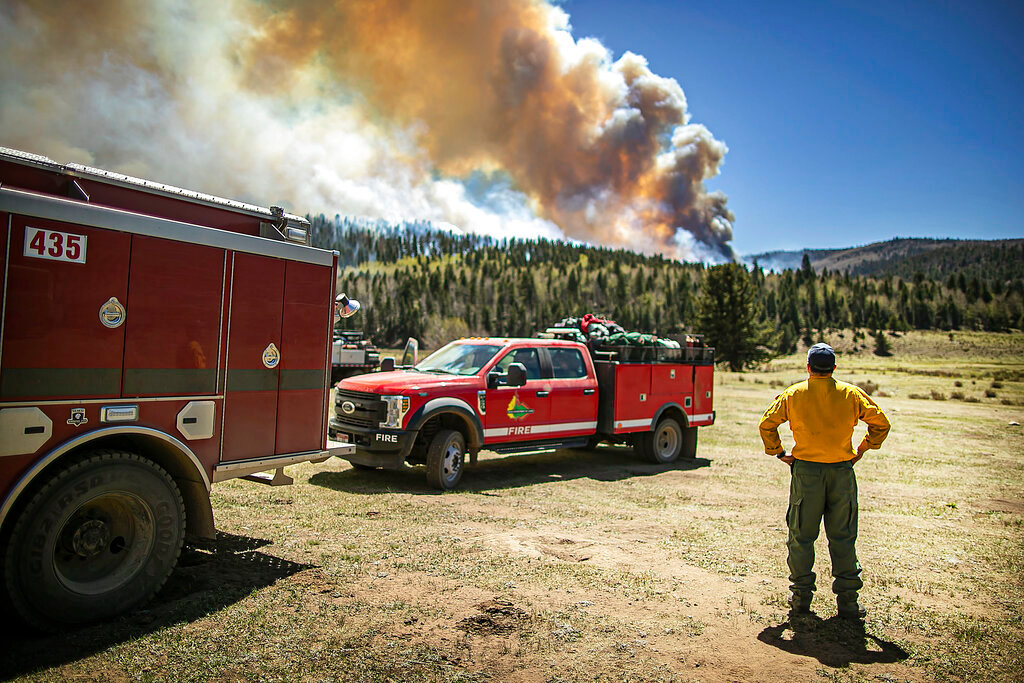 Firefighter Ryan Le Baron with the Elk Creek fire department out of Colorado watches the fire blaze across a ridgeline near the Taos County line as firefighters from all over the country converge on Northern New Mexico to battle the Hermit's Peak and Calf Canyon fire on May 13, 2022. (Jim Weber/Santa Fe New Mexican via AP) 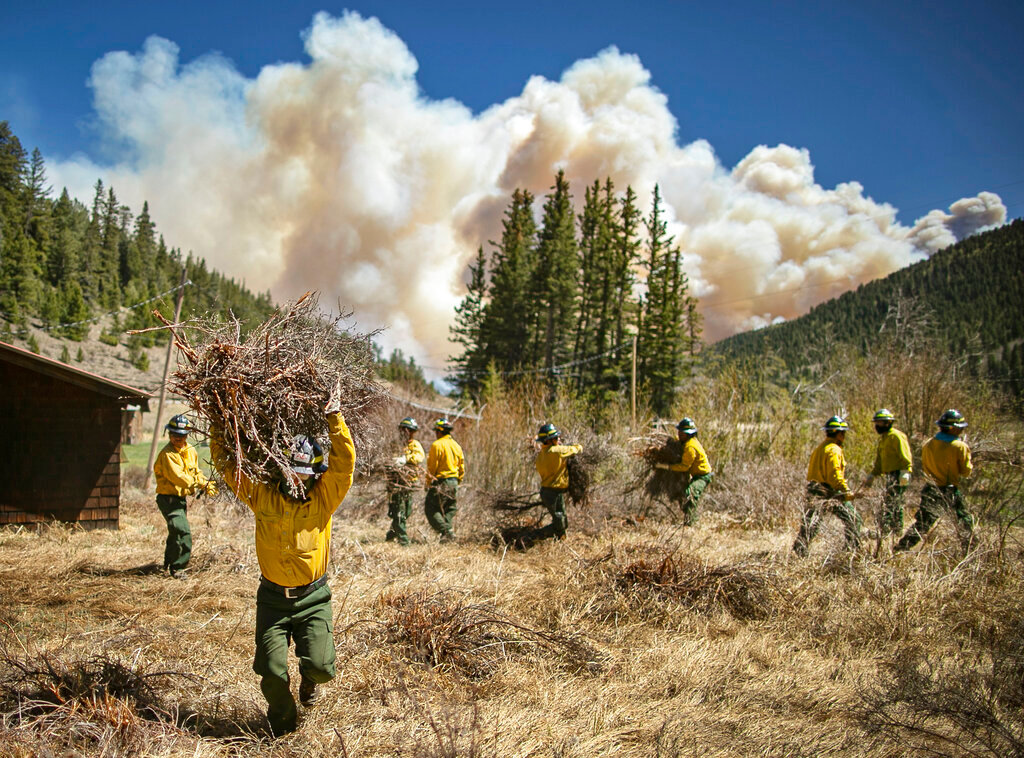 Firefighters with Structure Group 4 clear brush and debris away from cabins along Highway 518 near the Taos County line in New Mexico, May 13, 2022, while fire rages over the nearby ridge. (Jim Weber/Santa Fe New Mexican via AP) 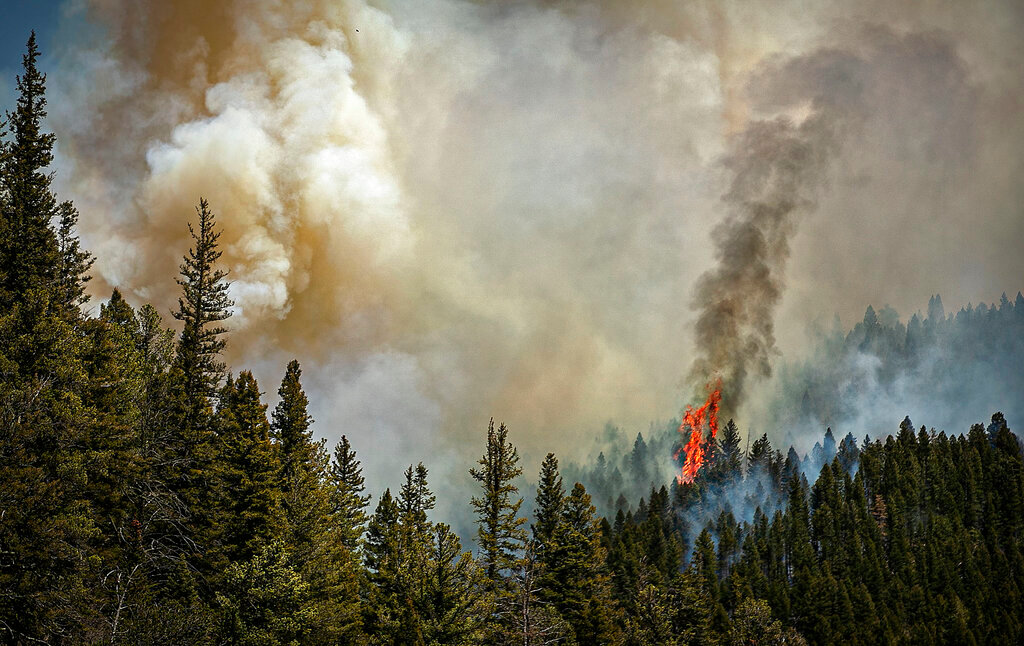 Fire rages along a ridgeline east of highway 518 near the Taos County line as firefighters from all over the country converge on Northern New Mexico to battle the Hermit's Peak and Calf Canyon fires on May 13, 2022. (Jim Weber/Santa Fe New Mexican via AP) 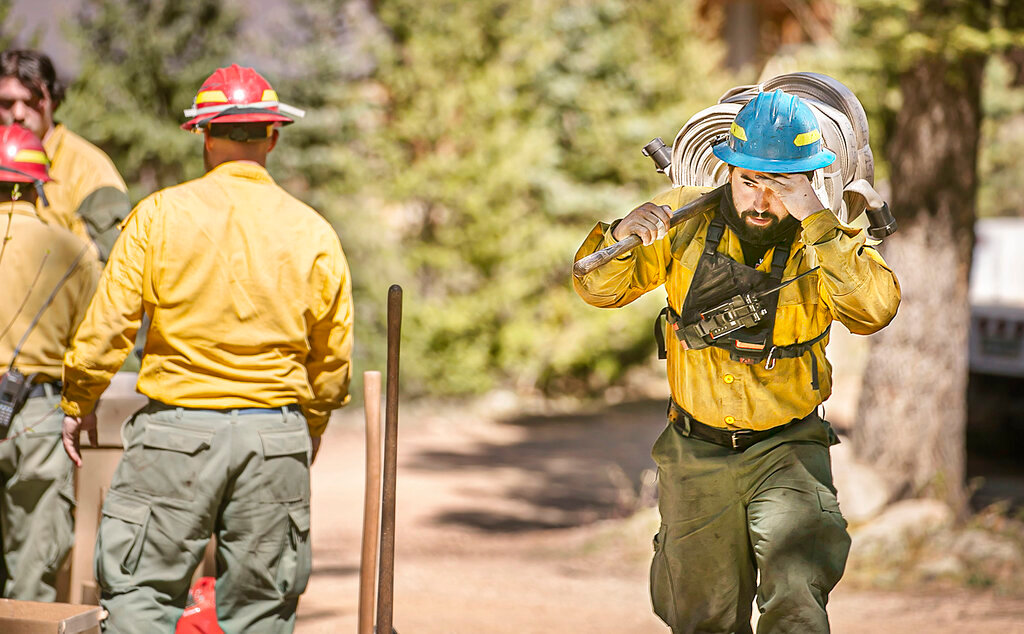 Firefighters with Structure Group 4 hook up hoses to a sprinkler system to protect homes in the Loma Linda neighborhood off highway 518 north of the Taos County line as firefighters from all over the country converge on Northern New Mexico to battle the Hermit's Peak and Calf Canyon fires on May 13, 2022. (Jim Weber/Santa Fe New Mexican via AP)
Previous Next
Posted Wednesday, May 18, 2022 10:12 pm
By SUSAN MONTOYA BRYAN, Associated Press

ALBUQUERQUE, N.M. (AP) — More than 2,000 firefighters battling the largest U.S. wildfire dug back-up fire lines and rearranged fire engines around homes in northeast New Mexico on Wednesday in anticipation of a return to windy, dangerous conditions in the days ahead.

After a break in the weather allowed for significant progress on the ground and from the air in recent days, forecasters issued warnings for high fire danger from southern Nevada through parts of Arizona, New Mexico and Colorado starting Thursday.

“The next three days are going to be the giddy-up days,” fire behavior analyst Dennis Burns said Wednesday.

“Crews are out there are working as hard as they can to get in line as quickly as possible,” he said during an afternoon briefing at the fire east of Santa Fe stretching northeast toward Taos.

New Mexico Gov. Michelle Lujan Grisham has said damage estimates for homes and structures could reach more than 1,000 by the time all the assessments are done.

On Wednesday, no new evacuations were ordered and some were relaxed. Burns said the biggest new concern was that thunderstorms packing lightning and strong down-draft winds would fuel the fire again Thursday.

Bulldozers and hand crews were building contingency lines near the town of Angel Fire east of Taos to make sure the flames don’t reach U.S. Highway 64 within about 25 milesof the Colorado line.

“If we are fortunate enough to dodge that bullet, the cloud cover will actually shade out the fuels and moderate the fire behavior a little bit, which is a good thing,” Burns said Wednesday. “But tomorrow will be the day to tell.”

While the fire encompasses an area more than 1.5 times the size of New York City, fire managers said there are pockets of green within the perimeter that could still burn.

“We’re trying to go all the way around the edge of the fire and we want to keep the fire where it is right now,” Jayson Coil, an operations chief assigned to the blaze, said Wednesday of using bulldozers to cut wide lines that can block flames.

Fire managers also said not all areas have been burned severely, and crews have been able to protect many homes and structures by clearing out vegetation and using sprinklers and hose lays to knock down the flames as they approach populated areas.

Lujan Grisham spoke with President Joe Biden on Tuesday and underscored the impacts of the fires on communities and the need for ongoing partnership with the federal government as the drought-stricken state recovers and rebuilds from some of the most devastating wildfires on record in New Mexico.

Biden reaffirmed the support of the federal government and said every effort will be made to provide immediate help to people in the impacted communities. He also expressed his gratitude to the first responders, firefighters and other personnel who are battling the blazes and have come to the aid of residents.

Evacuation orders remain in place for residents near a handful of large blazes in New Mexico, Colorado and Texas, where three large fires were reported Tuesday, according to the National Interagency Fire Center.

Lujan Grisham has warned that many New Mexico residents, depending on where they live, should be ready for potential evacuations all summer given the likelihood for higher fire danger due to strong winds, warmer temperatures brought on by climate change and forecasts for little to no precipitation.

Another fire burning in the Gila National Forest in southern New Mexico had grown more than 57 square miles overnight Tuesday into Wednesday, causing concern among state officials. Forest roads and trails in the area were closed, but officials said late Wednesday crews made good progress during the day that kept the perimeter from growing.