NASHVILLE, TN — Ted Cruz is the favorite presidential candidate of Protestant pastors who lean Republican. Hillary Clinton leads among Democratic pastors. And Donald Trump is near the back of the pack.

But “Undecided” is by far the most popular choice of America’s pastors according to a recent telephone survey of 1,000 Protestant senior pastors from Nashville-based LifeWay Research. The survey found nearly half of those planning to vote (48 percent) don’t know whom they would vote for if the presidential election were held today.

“One of the most surprising findings of our survey was the poor showing of Donald Trump,” says Ed Stetzer, executive director of LifeWay Research. “When it comes to Mr. Trump, there seems to be a huge gap between the pulpit and the pew.”

Previous surveys have found pastors in general are wary about being publicly identified with political candidates. A 2012 LifeWay Research study found almost nine out of 10 (87 percent) Protestant pastors disapprove of endorsements from the pulpit.

The IRS also bars pastors and leaders of other nonprofit groups from taking active roles in campaigns, at least in their official capacity. And pastors often have congregation members who disagree about whom to vote for. 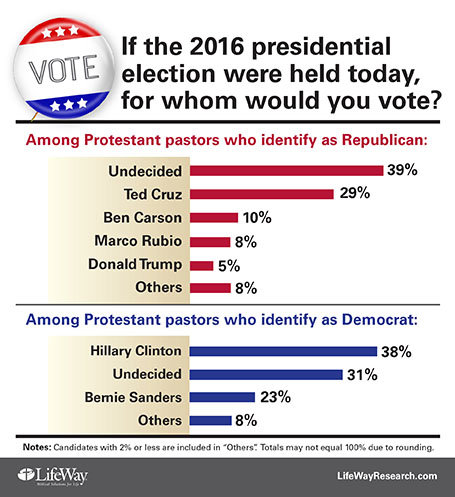 This new poll shows pastors have a distinct view of the current election cycle—one that’s different from people in the pews, says Stetzer.

“One of the few religious groups that national polls track are evangelical Christians, and it is hard not to notice a surprising gap between them and their pastors,” says Stetzer.

“Based on most other polls, rank-and-file evangelicals and church attendees are most likely supporting Trump. Yet pastors are undecided or more likely to support Cruz. The absence of support for Trump is similar to unscientific surveys of evangelical leaders from the National Association of Evangelicals and WORLD Magazine that have consistently pointed to Rubio.