AILEY — The partnership between Georgia Baptists and the Yucatan Peninsula that thrived nearly a dozen years ago continues to produce fruit with the launch of a new church. Daniell Baptist Association is on the frontlines of that new work through the first of two mission trips to the locale.

In May 2017, Associational Missionary/Associational Mission Strategist Billy Puckett took a scouting team from Daniell Baptist Association (DBA) to evaluate ministry needs in the area. The team discovered much work remained to be done and a new church plant was more than willing to receive assistance. 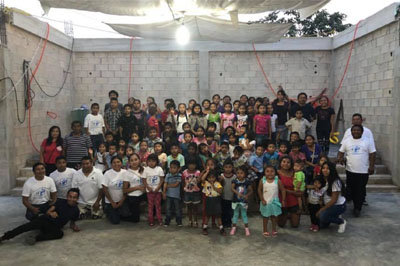 About 85 children enjoyed a week of Vacation Bible School led by members of the Association and Iglesia Bautista Vida Nueva. DBA/Special

In December the first team arrived and, on request from church leaders, taught classes in ecclesiology, hermeneutics, and evangelism/discipleship. Earlier this month on a second trip, church leadership was instructed on advanced hermeneutics as well as Old Testament and New Testament survey.

Puckett said the ongoing partnership between the Association includes students from nearby Brewton Parker College, where he serves as instructor. The experience provides students with an opportunity to see missions up close while engaging in personal witnessing and outreach such as Vacation Bible School.

DBA Hispanic Church Planter Joey Davis served as team leader for the week-long trip to Kantunikin, Mexico. A total of 16 individuals participated on the outreach.

“On this trip people were saved, brothers were prayed with, leadership in the church was encouraged, we made new contacts, and now God is opening new doors to serve in even greater ways in Kantunilkín that will reach even more with the gospel. We all walked away encouraged about what God is going to do with Iglesia Bautista Vida Nueva. 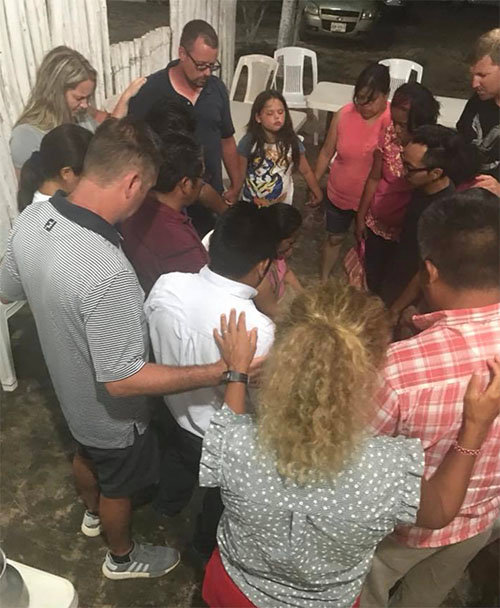 Members of Daniell Association participate in a prayer circle during the week-long outreach. DBA/Special

“Pastor Luis and his wife Veronica are doing a great job leading and we are working with them to partner in reaching Kantunilkín,” Davis, who also serves as pastor of Iglesia Bautista De Cedar Crossing, added.

Puckett said that Vida Nueva requested teachers to come invest in their church leadership to develop their ministry skills. Classes were held for six hours each day. Ricky Cummings taught hermeneutics while Vinson taught a survey of the New Testament and Puckett taught an overview of the Old Testament.

Also, each morning and afternoon – Tuesday through Friday – Davis led nine members in door-to-door evangelism as they shared the gospel and invited adults to church and children to Vacation Bible School. 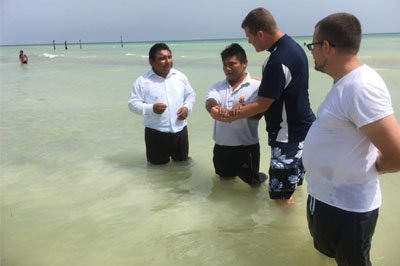 From 4 p.m.- 7 p.m. each day – Wednesday through Friday – the entire team joined the church VBS team and ministered to around 85 children each day.

On Thursday, Bellflower and his team from First Lyons arrived to assist with VBS. As that event ended each day, he and his team met with the leaders of the church and provided instruction in children’s ministry.

Puckett said that DBA pastors “had several encouraging one-on-one meetings with Luis Rodriguez, pastor of Vida Nueva. We were able to instruct him in the ordinances of the Church, and while we were there, he baptized a new believer and lead his church in the Lord’s Supper for the first time.

“On Saturday the church traveled to the beach and baptized four new converts. Pastor Ricky baptized the first person as a demonstration for Pastor Louis, who then baptized the other three as the church choir sang praises from the shore. It truly was a glorious day.” 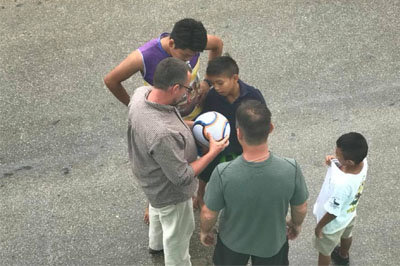 Davis shares the gospel using an "evangelistic soccer ball" similar to an Evangicube with youth in the village. DBA Acts 1:8 Missions Team Leader and First Lyons member Mitch Bellflower, with back to camera, watches the interaction. DBA/Special

Puckett said the partnership is bearing fruit “and a solid Baptist church is being established and strengthened in Kantunilkín, Mexico. Our opportunity to be a part of this kingdom work is certainly a gracious gift of our God to us.”

The Association is considering a third trip this December and a fourth trip next summer.