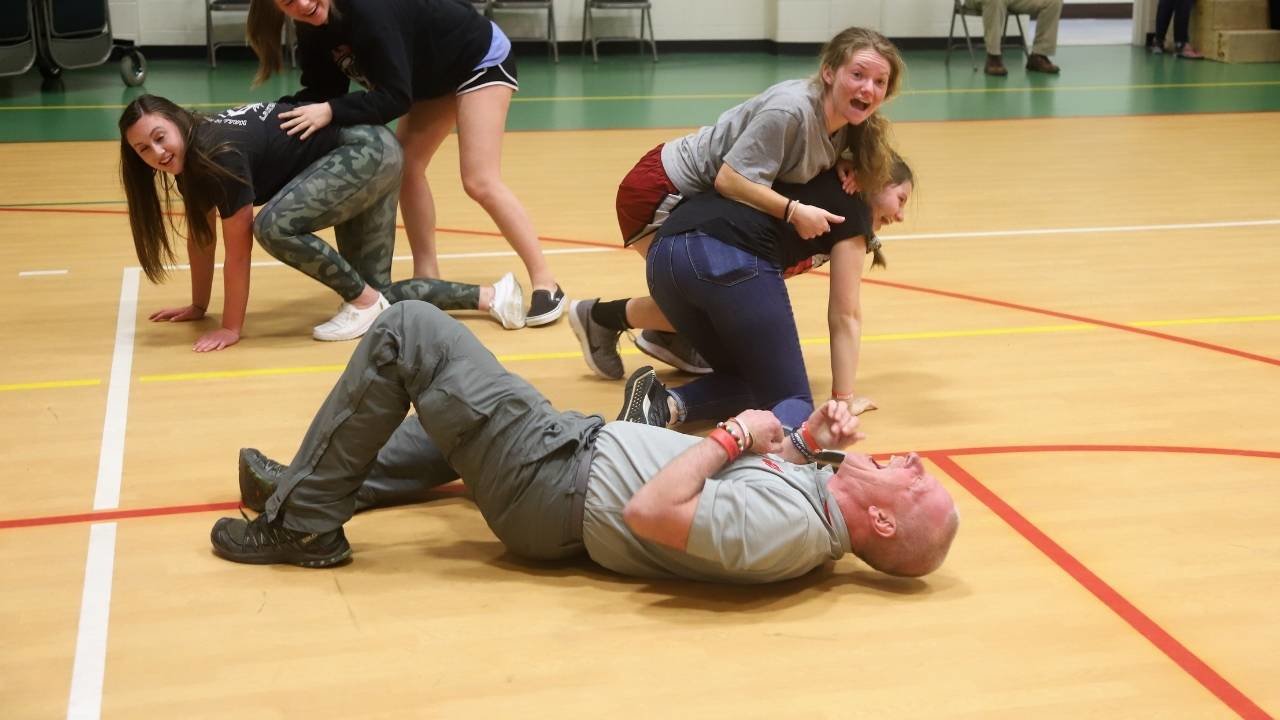 Talking about getting down on the level of  those to whom he ministers, David Rogers is rolling in laughter with Sophie Raby, Lauren Barnes, Meagan Thompson and Samantha Salter. COURTESY/David Rogers

CLAYTON – Olympic torchbearers are privileged individuals who merit recognition. Paavo Nurmi, the nine-time Olympic champion in long-and middle-distance runs carried the torch to the cauldron in Helsinki in 1952. Muhammad Ali, the world heavyweight champion was the unforgettable torchbearer in the 1996 Olympic games in Atlanta. David Rogers, the student and missions pastor of Clayton Baptist Church, carried the torch through Rabun County on the way to Atlanta for the 1996 Olympics.

Rogers, who was recognized for 35 years of service as the student pastor of Clayton Baptist Church on March 21, has been carrying the torch of the Gospel for many years and igniting students with a love and devotion to Christ that has merited the praise and admiration of multitudes of both young and old in Clayton and Rabun County.

As a youth Rogers had given serious thought to going into the military. He grew up near Ft. Bragg in North Carolina and seemed to be drawn to a career in the military, particularly the Air Force, but circumstances began to pull him in another direction. He explained, “I remembered how much joy there was among our youth leaders at my home church, Snyder Memorial Baptist Church in Fayetteville, and how much fun I had as a teenager growing up in church.

I asked the ministers there what I should do if I felt called; and they said, ‘Do everything else before you go into the ministry.’ I tried engineering, construction, but nothing seemed to fit. Ministry was the last thing I tried, and it fit.”

Rogers ability to attract youth to the church has become legendary. He reasoned, “Over the years we have used everything recreationally, including the installation of a climbing wall, to attract students to our church, but the greatest tool has been adults who care about students, and who involve them in their lives.

“How you attract students is how you keep them. Fun attracts for only so long. Relationships are what lasts. Building relationships was critical when I came to Clayton in 1986 and they are still critical today. Students and adults have built relationships by going to ballgames, packing Samaritan Purse Shoeboxes, camping out, serving special needs kids in Ukraine, you name it. The relationships become precious through those shared experiences.”

Rogers admitted that the challenges standing in the way of reaching today’s youth are formidable. He exclaimed, “Our world continues to darken and drift. So many desire to go with the flow, because it is easier. Technology is a great tool, and it is here to stay, but it is all the new Ba’al. Students and their parents need to look up from their TVs, computer screens, video games and smartphones long enough to see that there is a life to be lived and relationship that need to be developed that are wholesome and spiritually meaningful.

A student pastor must have an innumerable number of joys to remain in a church for 35 years. Rogers commented, “Just getting to do life with my “forever family” is so special because of all the highs and lows we’ve walked through together. Getting to disciple students whose parents I disciples when I first came is way cool. Being the chaplain of the Rabun County High School Wildcat Football team for 35 years has allowed me to minister to a whole different group of students, coaches, parents and families.

“It is also a blessing to look across the nation and beyond to see our youth serving the Lord – one is a NAMB Send missionary planting a church in Colorado, another is an international missionary in Taipei, Taiwan, another is engaged in a church plant in Greenville, SC, but there are also dozens, if not hundreds of coaches, teachers, businessmen and women, military personnel, business owners, and moms and dads who are living out their Christian faith and raising their families to love Jesus and disciple others as a result of me having the opportunity of investing myself and my staff of 25 volunteers over the years. That is the real measure of success.”

That is how you carry the Gospel torch and spread the Good News in many places from Clayton, Georgia.

The church had numerous video testimonies on the Sunday Rogers was recognized. Lindsey Caudell explained, “David does not sugarcoat anything. He tells it exactly like it is and I loved hearing him teach the Word.”

Kimberly Dills spoke directly to Rogers, stating, “Thank you for answering the call to come to Rabun County 35 years ago. I am so grateful for what I learned from you and carry those lessons with me every day.”

“You were such an influential part of my life,” testified Meredith Nesmith. “The number of people you have drawn into our church is amazing. It was very important that you officiated at my wedding. Thank you for the impact you have made on my life and in the life of our church.”

Austin Jowers, looked back twenty years to his time as a student in the church and commented, “Thank you for your love for Christ and for how it fuels your love for people.”

Rob Stockton, Rabun County High School football coach and one of the greatest safeties in Georgia Southern History and GSU Hall of Famer, acknowledged that Rogers has been the chaplain of the local high school football team since arriving in Clayton. The coach added, “Thanks, David for mentoring our children and us. You are a prayer warrior, a leader, a servant and a friend.”

Alden Wright, a RCHS football player expressed delight over Roger’s recognition, saying, “On Friday nights he gets more excited about the game than the team does.”

Roger’s daughters Grace and Rachel Rogers Edwards blessed their dad for living what he taught. Grace said, “I get to see how you live your lives behind the scenes and that is special to me.” Rachel added, “My dad is involved in all the school’s activities. He goes to football, basketball and soccer games. He even eats with the kids in the school cafeteria. He knows that the most important thing a youth pastor can do in meet the kids on their level.”

Pastor Joey Thompson praised Rogers for his rich and lasting legacy, declaring, “David, did you know that you have been on the staff for 17 percent of the church’s 202-year history? You have struggled, fought and won many battles, because you are a prayer warrior for the Kingdom (of Christ).” At that point the church congregation rose to their feet and gave Rogers as standing ovation to express their love and gratitude for his ministry. Several added that they hope he will continue in that role for another 35 years.