Diminishing the value of one human life diminishes all, says Griffin in HB 481 testimony 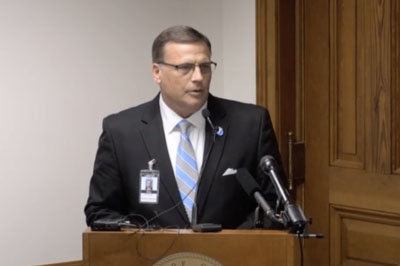 Griffin's testimony precedes a vote on the bill he is hopeful will take place as early as Monday. HB 481 would outlaw the majority of abortions once a doctor can detect a baby's heartbeat, typically at six weeks gestation.

In his testimony Griffin referred to the recent passage of an abortion law in New York and discussion for the same in Virginia. "The diminishing of the value of human life inside the womb has now moved to outside of the womb," he said.

Speaking with 11 Alive News, he added the bill expresses "an indicator to show when life begins that is also used when life is over, which is a heartbeat. Pretty simple. Very commonsense legislation."

A recap of the testimony was provided by Griffin last night on Facebook Live. The debate over abortion in Georgia has become a national discussion, as – should the bill pass – the state would have one of the most restrictive stances on abortion in the country. The Georgia Baptist representative gave credit to Governor Brian Kemp for the momentum. Speaking with a collection of pastors recently, Kemp reiterated his support for the bill.

"I really believe that the big difference this year," Griffin told National Public Radio, "is that you have a governor ... elected who made it one of his signature pieces of legislation to be a heartbeat bill."