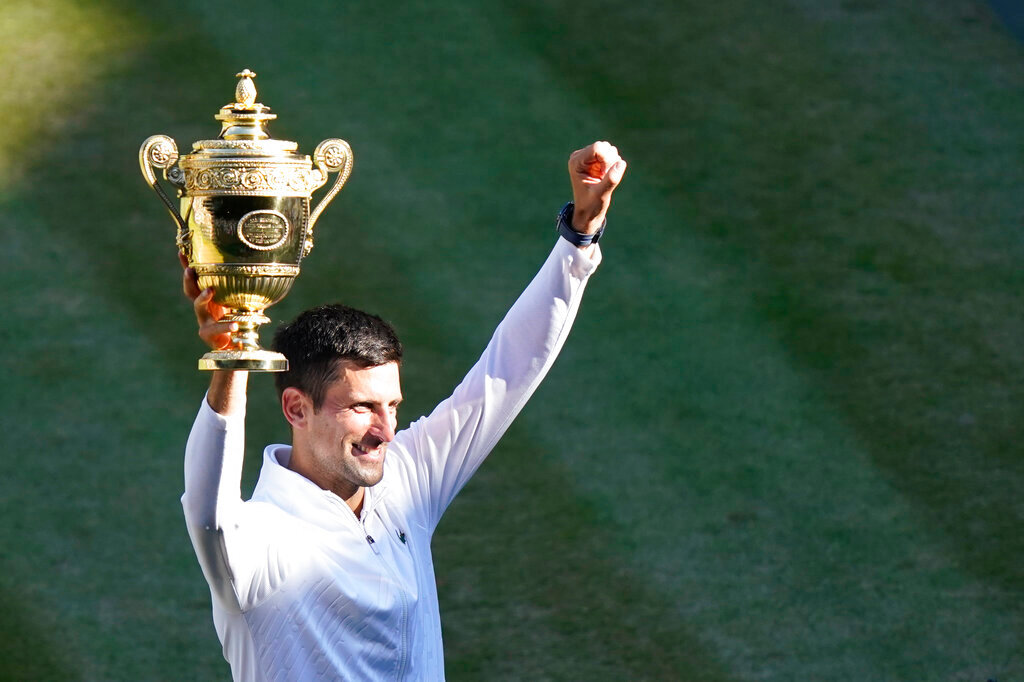 Serbia's Novak Djokovic holds the winners trophy as he celebrates after beating Australia's Nick Kyrgios to win the final of the men's singles at the Wimbledon tennis championships in London, Sunday, July 10, 2022. (AP Photo/Gerald Herbert) 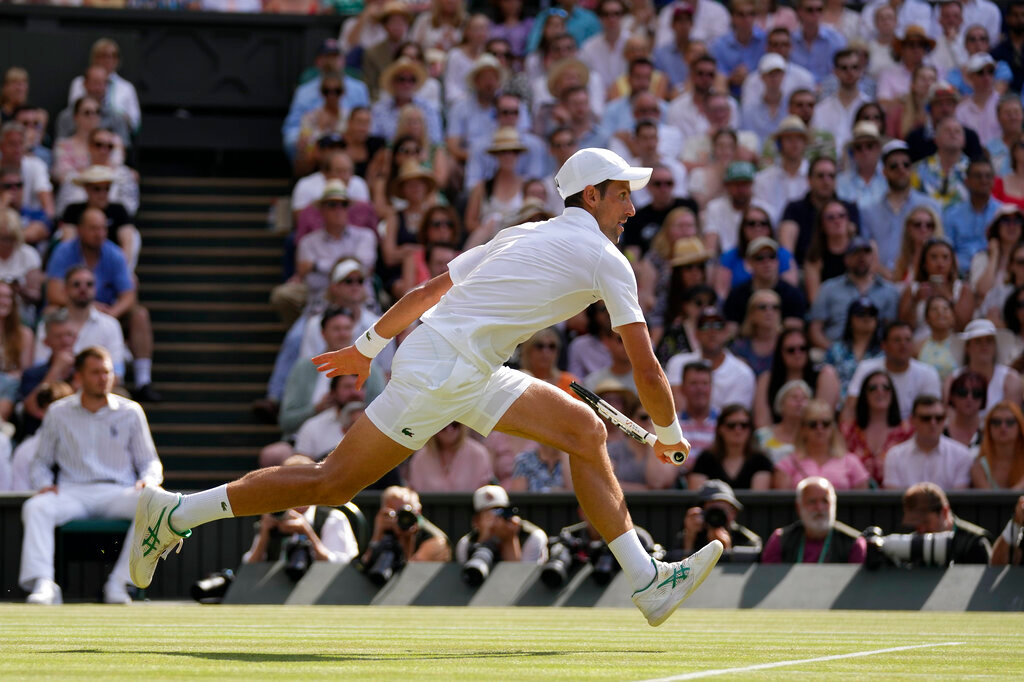 Serbia's Novak Djokovic runs to return to Australia's Nick Kyrgios in the final of the men's singles at the Wimbledon tennis championships in London, Sunday, July 10, 2022. (AP Photo/Alastair Grant) 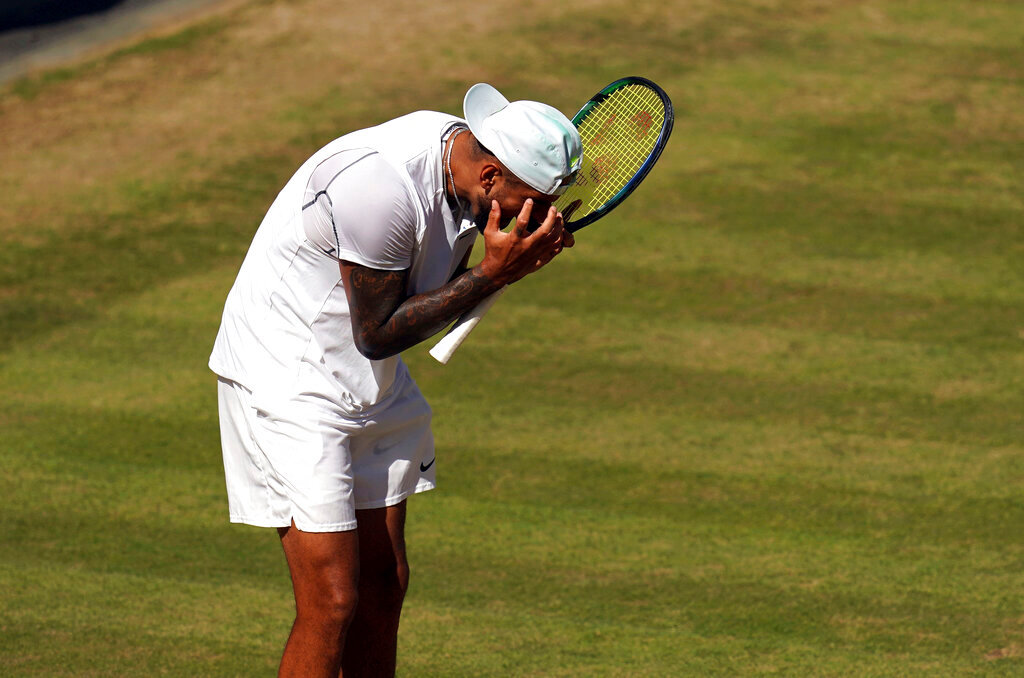 WIMBLEDON, England (AP) — Novak Djokovic waited. He waited for Nick Kyrgios to lose focus and lose his way. Waited to find the proper read on his foe’s big serves. Waited until his own level rose to the occasion.

Djokovic is not bothered by a deficit — in a game, a set, a match. He does not mind problem-solving. And at Wimbledon, for quite some time now, he does not get defeated.

Djokovic used his steady brilliance to beat the ace-delivering, trick-shot-hitting, constantly chattering Kyrgios 4-6, 6-3, 6-4, 7-6 (3) on Sunday for a fourth consecutive championship at the All England Club, seventh overall there, and 21st from all Grand Slam tournaments.

“It’s weird. I felt like he didn’t do anything amazing today,” said the unseeded Kyrgios, offering an assessment with which some might not concur, given that Djokovic accumulated 31 winners and merely eight unforced errors over the last two sets while facing zero break points in that span.

Among men, only Roger Federer owns more Wimbledon titles than Djokovic, with eight, and only Rafael Nadal owns more major trophies, with 22.

“The more you win, it’s logical the more confident, the more comfortable you feel out there every next time you step out on the court,” said the top-seeded Djokovic, who was pleased to hear some spectators at Centre Court chanting his nickname, “No-le! No-le!” as he served out the final point of a tremendously well-played tiebreaker.

As of now, Djokovic will not be able to try to pull even with Nadal by winning the U.S. Open, which begins in late August: The 35-year-old Serbian can't enter the United States because he decided not to get any shots against COVID-19, the same reason Djokovic missed the Australian Open in January.

“I’m not vaccinated,” Djokovic said Sunday, “and I’m not planning to get vaccinated.”

Aside from his experience — 32 Grand Slam final appearances versus one for the unseeded Kyrgios — his skill and his clutch gene shined in the concluding tiebreaker, and all of those qualities were present for two particularly pivotal games that helped swing the match.

They were games in which Djokovic steeled himself, and Kyrgios blinked. And games that Kyrgios would not let go as he began engaging in running monologues, shouting at himself or his entourage (which does not include a full-time coach), earning a warning for cursing, finding a reason to disagree with the chair umpire he fist-bumped before the match, and chucking a water bottle.

With Djokovic serving for the second set at 5-3, Kyrgios got to love-40 — a trio of break points. But Kyrgios played a couple of casual returns, and Djokovic eventually held. When that set ended, Kyrgios waved dismissively toward his box, sat down and dropped his racket to the turf, then groused to no one in particular: “It was love-40! Can it get any bigger or what?! Is that big enough for you?!”

“He knew on this stage, when Nick starts to talk, he’s going to be vulnerable,” said Djokovic's coach, 2001 Wimbledon champion Goran Ivanisevic. “That happened.”

In the third set, with Kyrgios serving at 4-all, 40-love, he again let a seemingly sealed game get away, with Djokovic breaking there.

“It was a huge momentum shift,” Djokovic said, “because up to that point we were quite even.”

Kyrgios was almost perfect in the first set, with 11 winners before he made a second unforced error. The 40th-ranked Kyrgios, a 27-year-old from Australia, had never been past the quarterfinals in 29 previous Grand Slam appearances — and the last time he made it even that far was 7 1/2 years ago.

His talent is unmistakable. But over the years, Kyrgios has drawn more notice for his preference for style over substance on the court, his tempestuousness that has earned him ejections and suspensions, and his taste for the nightlife.

During the past two weeks alone, Kyrgios racked up $14,000 in fines — one for spitting at a heckling spectator after a first-round victory, another for cursing during a wildly contentious win against No. 4 seed Stefanos Tsitsipas in the third round — and caught flack for wearing a red hat and sneakers before or after matches at a place where all-white clothing is mandated. Word also emerged that he is due in court next month in Australia to face an assault allegation.

On Sunday, Kyrgios tried shots between his legs, hit some with his back to the net, pounded serves at up to 136 mph, and produced 30 aces. He used an underarm serve, then faked one later.

For all of the significant records and other factoids logged in the 560-page Wimbledon Compendium — including categories such as “ambidextrous players” or “runners-up who wore glasses in a final” — no mention is made of “underarm serves in a gentleman’s final,” but it seems safe to say that was a first.

All players representing Russia or Belarus were barred by the All England Club because of the war in Ukraine; among those banned was No. 1-ranked Daniil Medvedev, the reigning U.S. Open champion. In response, the WTA and ATP tours took the unprecedented step of revoking all ranking points from Wimbledon (Djokovic, for example, earned zero points for his title and will slide to No. 7 on Monday).

A woman who was born in Russia but has represented Kazakhstan for four years, Elena Rybakina, won the women’s trophy Saturday with a 3-6, 6-2, 6-2 victory over Ons Jabeur. There’s more: Federer missed the tournament for the first time since the late 1990s, The No. 2 man in the rankings, Alexander Zverev, sat out injured. Three of the top 20 seeded men, including 2021 runner-up Matteo Berrettini, pulled out of Wimbledon after testing positive for COVID-19. And Nadal withdrew with a torn abdominal muscle before he was supposed to face Kyrgios in the semifinals.

“So the run keeps going,” Djokovic said after his unbeaten streak at Wimbledon reached 28 victories. “I feel very connected with this court and with this tournament, without a doubt.”