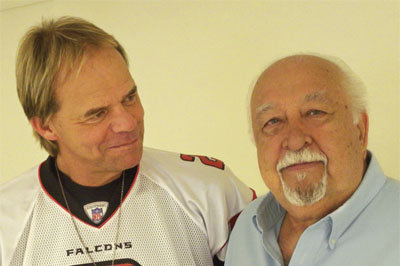 CLARKDALE – The death of Pastor Marvin “Doc” Frady has left a great void in Clarkdale Baptist Church and in the hearts and lives of a multitude of people who knew and loved him. He was a “code breaker."

That is what Bob Buford calls them. “Code breakers” are the senior citizens who have pioneered the art of finishing well in these modern times, and who can teach others to do the same. 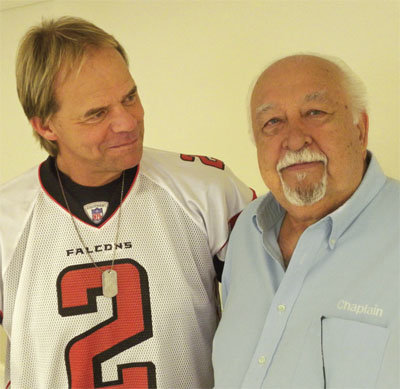 Doc Frady, right, served as a mentor to former professional wrestler Lex Luger, who spoke of the relationship in a 2011 article for The Index. GERALD HARRIS/Index

In his book Finishing Well, Buford has called upon “code breakers” like Dr. Ken Cooper, Roger Staubach, George Gallup, and Howard Hendricks to detail how they have gone beyond success to significance. These seasoned champions also explain how others can accomplish a work that has eternal purpose and meaning until the day they die.

Buford might have well included Marvin “Doc” Frady’s testimony in his book, because in these parts it would be difficult to find anyone who has finished with greater faithfulness and significance than “Doc”.

Last July, at age 81, he celebrated his 25th year as pastor of Clarkdale First Baptist Church in Austell and indicated that he had no intentions of slowing down.

Someone said, “If people see their best years behind them, they’re probably not going to finish very well, because you can’t finish well when you are going backwards.”

Frady graduated from the Palmer College of Chiropractic in 1960 and worked for 14 years as a chiropractic doctor in Smyrna, but couldn’t resist the call of God upon his life.

The Marietta Daily Journal quoted Frady as saying, “I was never able to dismiss what I believe was a calling in my life. In 1968 I surrendered to that and in 1970 I was ordained. ... Some people golf, some people fish. I like to help people. As long as they don’t change the locks [at the church] on me, I’ll be there Sunday.”

The chiropractor-turned-pastor was also a founding member of the Cobb Sheriff’s Office Chaplain Program, where he served for over 25 years under both Sheriff Neil Warner and former Sheriff Bill Hutson. He had the responsibility of overseeing the work of seven chaplains of various faiths. The law enforcement officers in Cobb County considered him their pastor and mentor.

The Clarkdale pastor also served as the chaplain for the Georgia House of Representatives and the Senate. He served as the North Georgia chairman of the Board of Directors for Cumberland Christian Academy.

Frady also became a mentor and spiritual father to Lex Luger, the professional wrestler who gained worldwide fame as “The Total Package". In an interview with Luger, the wrestler told The Index that he and “Doc” met regularly for the purpose of discipleship and Bible study.

Frady is survived by his wife of 63 years, the former Jan Norris; his son, Randy Frady; his daughter, Rabona Gordan; eight grandchildren; and six great-grandchildren.

On Sunday, February 14 Clarkdale First Baptist Church had a special service of worship to celebrate the life of their beloved pastor.