Does the dogma live within you? 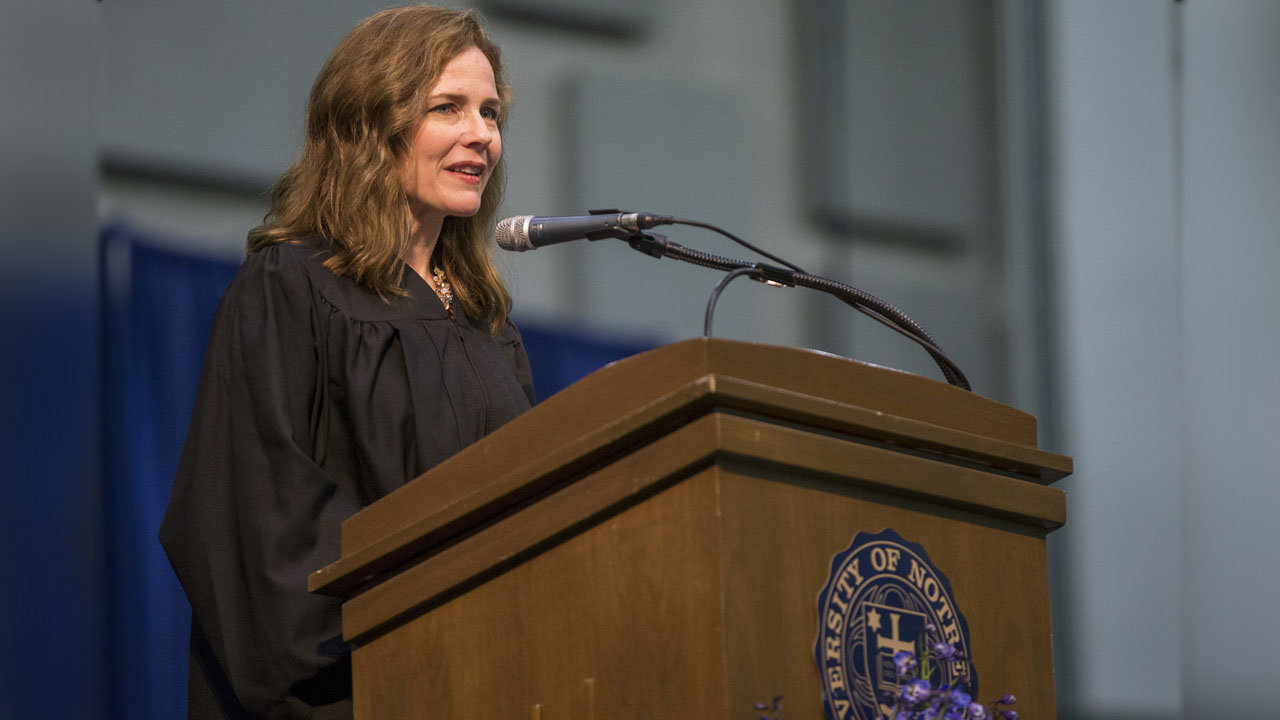 In this May 19, 2018, file photo, Amy Coney Barrett, United States Court of Appeals for the Seventh Circuit judge, speaks during the University of Notre Dame's Law School commencement ceremony at the university, in South Bend, Ind. Barrett, a front-runner to fill the Supreme Court seat vacated by the death of Justice Ruth Bader Ginsburg, has established herself as a reliable conservative on hot-button legal issues from abortion to gun control. Photo by Robert Franklin/South Bend Tribune via AP, File
Posted Tuesday, October 27, 2020 3:15 pm
Scott Barkley

The confirmation of Amy Coney Barrett as the 115th justice to the Supreme Court should be cause for celebration for every American, despite what you may have heard. Her story has been told extensively over recent weeks – top student in her class at Notre Dame Law School; clerk for Supreme Court Justice Antonin Scalia; voted Distinguished Professor of the Year three times after returning to Notre Dame Law School; mother of seven, two of them adopted; and something that just makes her more relatable, the only SCOTUS member who is not a graduate of Yale or Harvard. You can get a more complete picture here.

Barrett, 48, was given a judicial oath today by Chief Justice John Roberts after undertaking the constitutional oath by Justice Clarence Thomas last night. Her swearing in officially gives the conservative side of the court a 6-3 advantage, though at times Roberts has been more of a swing vote.

During her confirmation hearing, Barrett backed up what many people already testified about her. Namely, she’s a brilliant legal mind and very well could become one of the all-time greats to sit on the highest court in our land.

And yet, attacks and cross-examination during her hearing centered on her conservative faith and how it may affect her judgement.

This argument has always puzzled me. In these cases, someone with biblical convictions is positioned as a threat to actually believe those convictions. And oh my, their actions may even reflect them. For the record, Barrett is considered an originalist and textualist. That is to say, she applies her understanding of the Constitution based on what the language meant as it was written and focuses on the text instead of what lawmakers are trying to accomplish through the judiciary.

“You are controversial,” Sen. Dianne Feinstein nevertheless told Barrett during the latter’s 2017 Court of Appeals confirmation hearing. This was largely because of Barrett’s pro-life convictions as a Catholic.

"So many of us on this side have this very uncomfortable feeling that ... you know, dogma and law are two different things," Feinstein continued. "I think, in your case ... the dogma lives loudly within you. And, that's of concern."

I scanned through several articles this morning about Barrett’s oath taken last night. In particular, the wording used to connect her with Justice Scalia caught my eye. The New York Times called her his “protégé.” At least two other national papers, though, used different terms. The Washington Post referred to her as an “acolyte” of the late judge and the Wall Street Journal saw her as a “disciple.”

Just for some background, the Post is seen as a left-leaning outlet while the Journal is regarded as center-right. And to be fair, there may not be any conscious intention by the writers to use religious terms regarding Barrett.

A large part of the discussion around Barrett’s nomination and conformation centered on Scalia, a conservative bulwark on the Court for 30 years. Fair or not, his influence on her and the way in which she will judge could not be overlooked.

Barrett’s faith was also center stage. It’s one thing to say you’re a Christian; it’s another to see the result of living that out. Some people get threatened by that. Barrett’s pro-life bona fides don’t need to be written. She and her husband welcomed two children from Haiti into their family. Her youngest child, who has Down Syndrome, is loved as one created in the image of God and not seen as “less than.”

The call of Galatians 2:20 is for us to recognize that Christ lives in us. That means handing over our own desires and following where He leads us. The skills and talents we have, such as being a brilliant judge, factor into where God would place us to make an impact.

Christians are not called to be isolated from the world, but to make a difference in it. Dietrich Bonhoeffer, in his classic “The Cost of Discipleship,” addressed this:

“Let the Christian remain in the world, not because of the good gifts of creation, nor because of his responsibility for the course of the world, but for the sake of the Body of the incarnate Christ and for the sake of the Church. Let him remain in the world to engage in frontal assault on it, and let him live the life of his secular calling in order to show himself as a stranger in this world all the more. But that is only possible if we are visible members of the Church.”

Sen. Feinstein meant for her point to be an accusation. But it’s actually a good question for us all.

When people see us, do they see Christ? Do they observe a set of principles that sets us apart from others? The only way it should be a concern is if the answer is “no.”