Doug Couch enters retirement with hope for another Jesus Movement

Couch takes a moment to reflect across his 34 years in helping win youth to Christ and then discipling them to become future leaders. Couch retired on May 31. JOE WESTBURY/Index
Posted Wednesday, June 20, 2018 3:39 pm
Joe Westbury

Couch takes a moment to reflect across his 34 years in helping win youth to Christ and then discipling them to become future leaders. Couch retired on May 31. JOE WESTBURY/Index

Revivals have a way of quickly changing society and then slowly fading into the past. What many people do not remember, however, is the lasting influence those events continue to have decades later.

Doug Couch is a child of the Jesus Movement, which began on the West Coast in the late 1960s and moved across the Continent to where it touched the life of the young student at West Georgia College (now University of West Georgia).

In some ways it became the foundational moment in his life, he relates. It was a moment which defined his ministry and propelled him into working with youth for the past 34 years at the Georgia Baptist Mission Board. Coincidentally, he was 34 years of age.

Couch retired on May 31 with mixed feelings about leaving his dream job, but with as much optimism about the future of the nation’s youth as ever. Youth have different problems today than when he joined the Board in 1984, but their optimism and hunger for God – even though many do not understand the source of the hunger – is just as encouraging.

The Mableton native describes his young years matter of factly, sounding like so many statistics that have been recorded about young people who come to faith and fade away.

“I was saved at a church camp at age 14 and went in the church front door and right out the back door,” he relates. He had a genuine salvation experience “and knew right from wrong but I just didn’t live like it. I knew my life did not please the Lord.”

Couch joined the Baptist Student Union at West Georgia, as Baptist Collegiate Ministry was known in those days, “because of a beautiful girl. But before she dropped me for a senior all my college friends were in the BSU” so it wasn’t a total loss, he jokingly admits.

That’s when he began hearing about a revival at Asbury College and that heroin addicts were being baptized in the Pacific Ocean.

The Jesus Movement was making its way to Georgia

The Jesus Movement was off and running and would eventually make its way to Georgia.

Couch says that many of his fellow collegians who were called into ministry out of that BSU are still in ministry today, largely because of that revival movement from a half-century ago.

“The world was in such a mess back then, national turmoil was everywhere with the Civil Rights Movement, the spread of drugs, campus unrest, the hippie culture. Our leaders were being killed off … John Kennedy, Jack Kennedy, Martin Luther King Jr. … the National Guard was repeatedly called out to put out fires and bring calm to the nation’s streets. Everyone was protesting something. 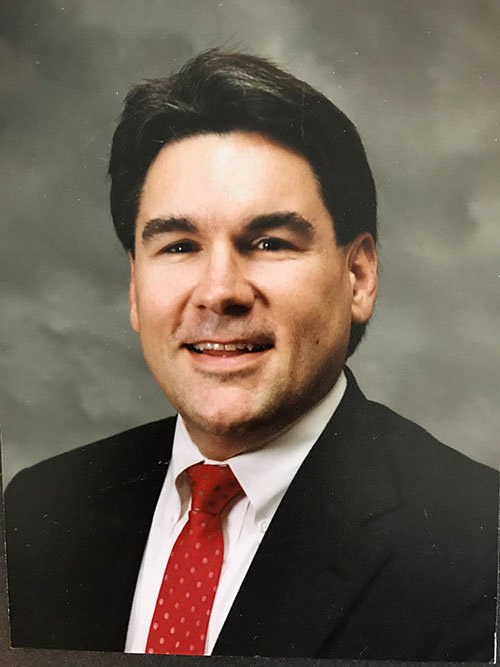 A young Doug Couch from his early days in youth ministry at the Georgia Baptist Mission Board. COUCH/Special

“That revival helped change a significant part of the youth culture at just the right time. You know, Scripture teaches that where sin abounds, grace abounds much more. It was just a national outpouring of God’s Spirit.

“God showed up and showed that He was still in control,” he explains.

Couch is hesitant to point to any one strength that stands out in his youth ministry, but when forced he says it is building a team of leaders and turning them loose. Organization is important, and locating team members who share the love of young people is what has made the department he had directed – Student Ministry Groups and Faith Development – have such an impact.

The far-ranging, high-energy programs he helped implement – SUPERWOW, Conclave, Impact, Merge – have created a legacy of attention to detail, solid planning, and commitment to youth.

"...  the joy of working with adults who love the Lord and love kids"

“For three decades I have had the joy of working with adults who love the Lord and love kids. That’s the magic bullet of Student Ministry,” he states.

The greatest challenge today is getting older, established congregations to embrace the younger generation in significant numbers. Those churches are the majority of Baptist congregations and, if they are marshalled, have the greatest potential to reach the next generation.

A pastor friend told Couch once that “you don’t reach who you want to reach, you reach who you are. That means you seek first those who are already in your community, in your backyard, who you already have a rapport with.”

Couch said that means reaching youth in the schools and neighborhoods and empowering them, giving them ownership in ministries in the church. That works itself out by placing them in the choir, using them in the Sunday morning worship service, inviting them to serve as youth ushers or parking lot greeters.

“The fields are truly white unto harvest and we as Baptists are going to have to ask what are we going to do about it?”

It’s just as difficult being a youth today as it has always been. Growing up is always tough. But youth today have an additional challenge when it comes to family life.

“We have youth groups signing up for our summer Impact camp and we have noticed there are significant instances of names on applications where a student’s last name does not match the last name of his or her parent. That shows a different home life than many of us grew up in,” he explains. 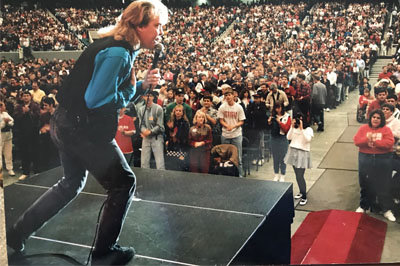 Contemporary Christian music vocalist Al Denson performs at a packed out crowd at the Georgia Dome. A record breaking crowd of 19,200 youth gathered in the massive structure in downtown Atlanta for the first Youth Evangelism Conference. YEC/Special

The church needs to be sensitive to that and, most important, be relevant to the world in which those youth live. If the church is not relevant, it has little reason to exist. The common denominator today is the lack of hope so many youth have. The answer, he continues, is giving relief from the pain they are experiencing.

"When you communicate God’s love you give the next generation hope. And believe me, they are starving for hope.”

What keeps youth out of church today is a perceived lack of relevance, he adds.  “Churches are like any organization that needs entry point ministries as I discussed earlier. Affinity groups, graduation recognition services, participating in special music are all ways of bringing youth into the life of the congregation.

“Bill Clinton, my mentor and pastor at First Baptist Church in Bremen for 16 years, would have a field day today doing bus ministry. The main difference is children are now not just spiritually hungry but physically hungry due to growing poverty and broken homes.

Government programs are not the answer, the local church is

“Local food programs in the schools are not the answer, the local church is the answer. Building strong families inside and outside the church is the answer. Every campus is a mission field. We need to quit trying to find ways of getting youth to come to church and find ways to serve them where they are. Then offer them quality experiences when they come to church. It’s hard to imagine a missionary being successful without being in touch with their mission field.”

Couch said churches cannot be content to do anything with mediocrity … they have to do it with excellence.

Ministry has never been easy and its always been a challenge, but he believes that  many churches are ready to meet the challenge. The children and youth are waiting. Couch then pauses for a minute and reflects back on his years in youth ministry, then makes a heartfelt pronouncement.

“There will be another spiritual awakening in the future and it will probably begin in a small prayer meeting in a public school where youth will be praying for the salvation of their friends.”

Columbus-based Ricky Smith succeeded Couch on June 1 and will continue to operate out of his field office.